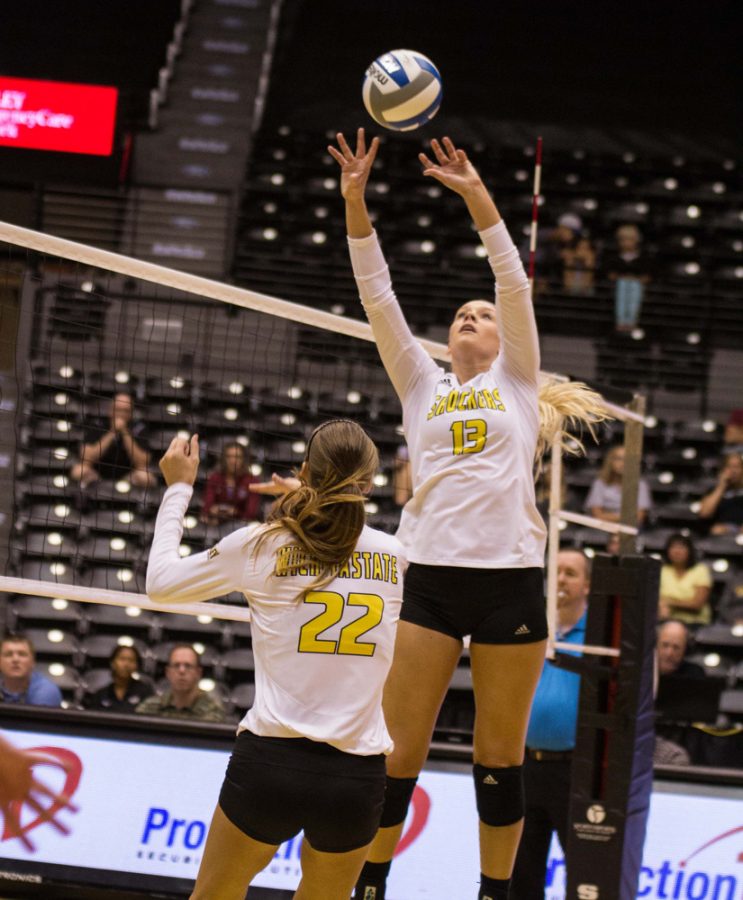 Junior Emily Hiebert sets up the ball for junior Abbie Lehman in a game against IUPUI at Charles Koch Arena. Hiebert was the first WSU player to win Setter of the Year on Thursday.

Growing up in Newton, junior setter Emily Hiebert traveled half an hour as a child to attend head coach Chris Lamb’s volleyball camps at Wichita State. The volleyball setting and serving  camp WSU offered allowed Hiebert to gain instruction from coaches and players as she led Newton High School to three straight KSHSAA 5A state tournaments.

The two-time Wichita metro selection had offers from numerous schools, with nearby Bethel College strongly eyeing her as both Hiebert’s mom and sister played volleyball on the Newton campus.

When Hiebert came time to decide where she was going to play college volleyball, she wanted to go to a school where she was close to her family and go to a high tradition volleyball program.

Her choice was obvious at that point: Hiebert was going to become a Shocker

“I’m a big homebody, so I wanted to stay close to home,” Hiebert said. “I just loved the coaches and the girls. (WSU) seemed like an awesome program and a great place to be.”

After redshirting her freshman year, Hiebert was immediately a steady contributor for the Shockers with 68 kills, 253 digs, and 1,122 assists in 2014. As a sophomore, Hiebert led WSU to a Missouri Valley Conference regular season and tournament championship where she hit .300 off 119 kills with 1,408 assists.

A performance of 58 assists and nine digs from the All-MVC team member helped the Shockers obtain a first round victory over Kansas State in the NCAA Tournament.

“My redshirt year, we had the best seniors to look up to and they taught us so much,” Hiebert said. “Chelsey Feekin was the setter before and she helped me so much. It was a huge change because (college volleyball) was so much faster.”

Hiebert has lifted WSU volleyball again this season, averaging 2.81 digs per set and 10.71 assists per set, ranking 34th in the NCAA. Due to Hiebert’s performances, the Shockers are 13-5 with a 6-1 conference record to move to the top of the MVC standings.

With WSU winning eight out of their last 10 matches, Hiebert has averaged 39 assists per match during that stretch.

Dishing out 3,205 career assists, Hiebert is ranked sixth on the all time WSU career assist leaders and will need 1,598 assists to top Mary Elizabeth Hooper’s record set from 2008-2011.

Hiebert said the record would be a great honor, but she ultimately wants to be remembered for someone that always works hard and a player who enjoys every moment.

According to redshirt freshman setter Jordan Roberts, Hiebert is an active leader for the Shockers this season. Roberts said that not only is Hiebert’s decision making and all around skill a great asset to the team, but the leadership Hiebert presents has helped Roberts and the other younger players develop.

“The way she leads the team has had a huge impact on me,” Roberts said. “With her being older than me and having gone through this has helped me a lot. Regardless if it’s tough, she’s constant 24/7.”

Hiebert and WSU look to continue to stay on top of the MVC standings this weekend. The Shockers travel to Indiana State on Friday and then go to Normal, Illinois, to face Illinois State on Sunday.