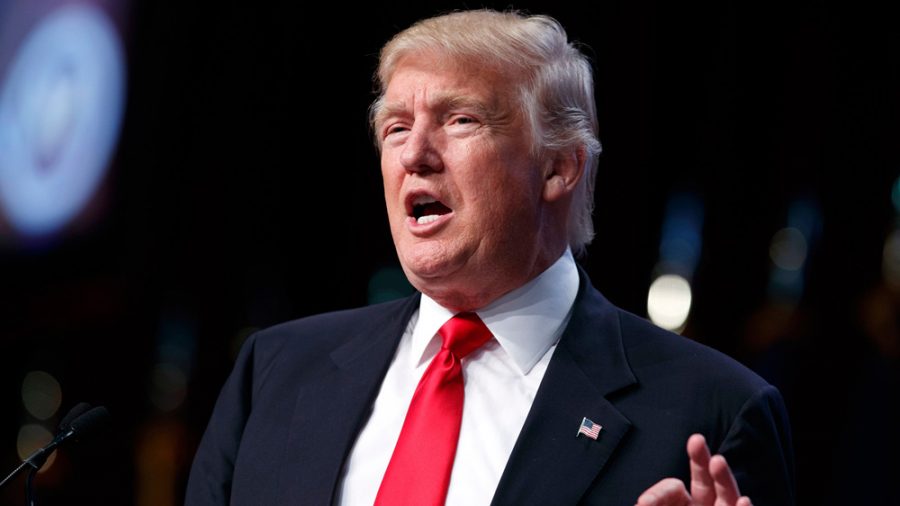 nce considered a long shot, Donald Trump is within striking distance of the White House.

Trump got the media buzzing when announced his campaign in June 2015, and the political stir has not yet quit.

In March 2015, Ted Cruz announced his candidacy for the Republican presidential primary. On May 3, 2016, Cruz dropped out of the race. A day later, Republican John Kasich dropped out, too. The Republican field of 17 dwindled down to a lone Donald Trump as he claimed the role as the party’s nominee.

Party leaders and other GOP candidates have almost unanimously underestimated Trump’s staying power. Rivals believed he would fail. Competing candidates were reluctant to attack, convinced they would scoop up his voters when his campaign imploded — but it never did.

Supporters have seemed ready to forgive any outrageous comment or slip-up.

But Trump’s campaign means no joke to the 70-year-old.

From real estate mogul, entertainment producer and the head of The Trump Organization, to presidential candidate, many still see him as an outsider to politics — let alone fit for the nation’s highest political office.

Trump’s interest in politics is nothing new. In 2012, Trump said he kicked himself for not entering the political stage. On New Year’s Day in 2015, he recalled telling a friend, “If the country keeps going in this horrendous direction, I have to run.”

Trump’s support on abortion is pro-life. Simply, he believes that abortion should be banned at some point in pregnancy, with exceptions for rape, incest or life of the mother.

Trump reassures voters that he changed his mind on the issue in 2011 after years of being pro-choice upon witnessing the example of a personal friend.

“Planned Parenthood does do wonderful things, but not as it relates to abortion.”

Trump plans to build a wall at the United States-Mexico border.

Trump said the wall 1,000-mile wall would cost nearly $7 million — an expense fronted not by tariffs, but entirely by Mexico.

“People say, ‘Oh, how are you going to get Mexico to pay?’ A politician cannot get them to pay. I can,” Trump said.

Trump says the United States has at least 11 million people who entered the country illegally. He suggests that through his plan, “they will go out.”

“They have to come back legally,” Trump said. “It may not be a quick process, but I think that’s fair. They’re going to get in line with other people.”

Trump states his views on immigration are not based on fear but reality.

“We are the only country in the world whose immigration system places the needs of other nations ahead of our own. There is a word to describe people who do that: fools,” Trump said.

Trump cites himself as a “Second Amendment person.”

The National Rifle Association publically endorsed Trump at its annual convention in May.

Trump agreed with Secretary Hillary Clinton in regards to withholding gun rights to people on the no-fly lists and watch lists. Trump believes mass shootings are the effect of a “huge mental health problem.”

Trump himself is the holder of a concealed weapons permit. He reiterates that he will continue to back the Second Amendment, and his campaign will focus the issue of mental health.

“No matter what you do, guns, no guns, it doesn’t matter,” he said. “You have people that are mentally ill. That’s the problem we need to fix.”

Trump is an avid supporter of anything not related to the Affordable Care Act — “Obamacare.”

“I would absolutely get rid of Obamacare,” Trump said. “I want to keep pre-existing conditions.”

Trump believes the Affordable Care Act needs to be repealed and replaced.

“Insurance companies are making a fortune because they have control of the politicians,” Trump said.

Trump plans to “take care of people that can’t take care of themselves” through a “different system.”

“Obamacare is turning out to be a bigger disaster than anybody thought,” Trump said. “Get rid of Obamacare, we’ll come up with new plans.”

Class-action lawsuits against Trump University — a for-profit institution offering courses in real estate, asset management and entrepreneurship — have made the institution defunct.

Despite the collapse of his institution, Trump advocates for improvements to the nation’s education system. He believes the Department of Education should “just be eliminated.”

“If we don’t eliminate it completely, we certainly need to cut it’s power and reach,” Trump said. “I am totally against Common Core, No Child Left Behind, and Race to the Top and the Department of Education. It’s a disaster. We cannot continue to fail our children — the very future of this nation.”

As a president, Trump promises to end Common Core.

With secondary education, Trump does not believe in free tuition or debt forgiveness.

“A four-year degree today can be expensive enough to create six-figure debt,” Trump said. “We cannot forgive these loans, but we should take steps to help students.

“These loans should be viewed as an investment to America’s future.”

Trump vows to save Social Security “with more jobs and less waste.”

“I would be willing to say I will not get Social Security,” Trump said. “As a policy, I would leave it up to the people. The fact is that there are people that truly don’t need it, and there are many people that do need it very, very badly.”

Trump thinks job opportunities are fleeing the country with businesses relocating labor to Mexico or outsourcing to China for cheaper production.

“Thousands of jobs are leaving. We can’t allow it to happen anymore,” Trump said.

He believes the United States has the “worst revival of an economy since the Great Depression.”

Trump opposed gay marriage in 2011. After the Supreme Court vote, Trump accepts it saying, “Gay marriage is a reality.”

“Some people have hopes of passing amendments, but it’s not going to happen,” he said.

Trump said the United States was right to invade Afghanistan after 9-11 attacks in an interview with CNN in October, but he’s previously called the war a “mistake.”

“We made a mistake about going into Iraq,” Trump said. “We made a terrible mistake getting involved there in the first place. We had real brilliant thinkers that didn’t know what the hell they were doing.

“At this point, you have to stay because that thing will collapse about two seconds after they leave.”

Trump claims he would be “slower to go to war than Hillary Clinton.” But Trump states that there is a severe problem with radical Islamic terrorism that he plans to end if elected into office.