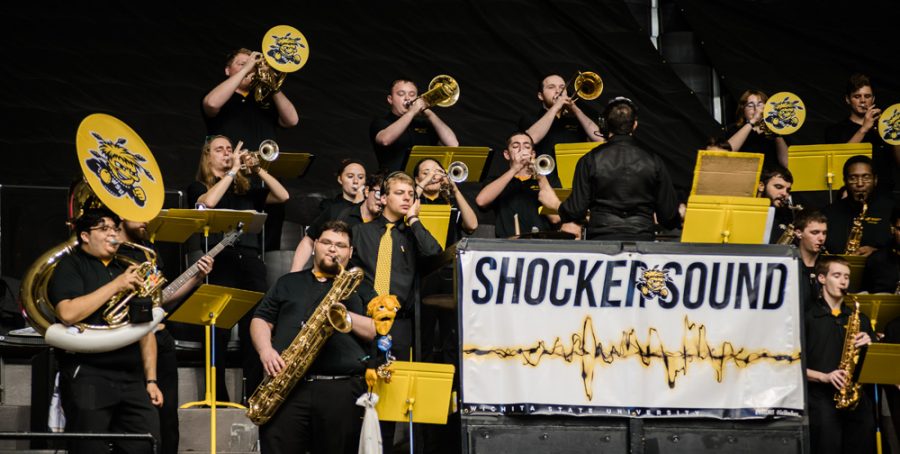 Wichita State’s pep band, Shocker Sound, has had its funding cut from student fees and is instead being funded by the athletics department.

“The public shouldn’t see anything change,” said Shocker Sound director Benjamin Reilly, one of two graduate teaching assistants that head the pep band, regarding the change.

Reilly described a closer relationship with the athletics department, particularly between the band and the cheer and dance teams.

“We try to work real close with the cheer and dance (teams). Last year, we were playing some songs for the dance team that they performed at the NCAA tournaments for the halftime entertainment,” said Reilly.

“This year, that’s something that we’re focusing on doing even more so we can make sure we’re one cohesive unit entertaining the crowd and making sure everyone is pumped up for the games,” he said.

Shocker Sound consists of between thirty and thirty-five band members playing at each basketball game. Members are switched from game to game on a rotating roster to give everyone a fair share of playing time. Members are paid for each game they play at.

In compliance with National Collegiate Athletic Association guidelines, the size of the band is reduced via an audition process in time for the spring semester as they prepare to travel alongside the basketball team for tournaments.

Shocker Sound travels to games on the same airplane as the basketball team, the cheer team, the dance team, and alumni.

Membership to the pep band is also open to all students, not just those with majors falling under the school of music.

Reilly described a “really open” process of selection when it comes to accepting applications.

“We’re very understanding with people’s skill levels with the instruments,” Reilly said. “These aren’t highly professional charts. These are pop tunes and rock charts. They’re fun to play and they’re easy to play.

“As long as they basically know how to play their instrument, they can get in the band and have a fun time with us,” Reilly said.

While participation in the university concert band is not a requirement for being involved with Shocker Sound, pep band members are encouraged to become involved with the music department.

“We want to share our love of music with them,” said Reilly.