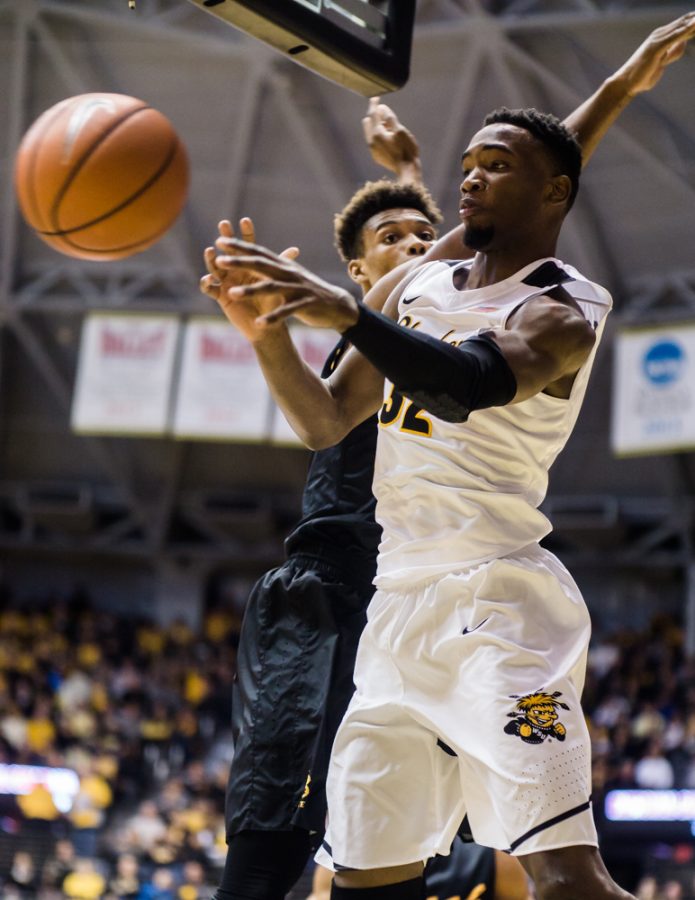 Sophomore Markis McDuffie (32) passes to an open teammate in the second half against Long Beach State Sunday night at Charles Koch Arena.

Each will agree expectations are high.

His dream: Missouri Valley Conference Player of the Year.

“I told Zach, you’re playing with two All-Americans. You’re going to be competing with guys on your own team, let alone the rest of the conference,” Marshall told him a season ago.

Brown never counted out his aspirations — he prolonged them.

He said he believes a lot of people are counting him out.

“I really don’t care what people think, but I can think in the back of my mind to a lot of people who are counting me out,” Brown said.

Brown said he’s ready to challenge the perceptions of those who might be counting him out, but he won’t let the expectations get in the way of his goals.

“I’ve learned to focus on myself, my life and my career,” he said. “Ultimately I have to be happy at the end of the day.”

All American guards Fred VanVleet and Ron Baker have left. But Brown’s biggest challenge may be on the same court, in the same colors, on the same team.

McDuffie, the reigning conference freshman of the year, split minutes with Brown at the position.

“I don’t have a preference where we are or who starts as long as we’re each producing,” Brown said.

Brown said they each bring the same intensity, but something different to the position.

“We each bring handsy defense, we’re slashy, we cut, we move well,” McDuffie said. “Zach is very strong, quick and he can jump higher than me.”

McDuffie wants to bring versatility in all aspects of his game.

Brown said McDuffie is improving, but it’s only a start.

“Freshman of the Year is only a milestone, Markis hasn’t peaked yet,” Brown said. “He’s going to be a big problem.

“He’s a much more skilled, player than he was a year ago.”

McDuffie said he’s ready to make “the big jump” as a sophomore.

“I definitely have to turn it up a notch,” McDuffie said.

He wants to be more of a winner. He said Marshall will put the best five on the court designed to help the team win.

McDuffie hints that he might be seen more at the three and the four this season. In the off-season, he reports to have put on muscle, allowing him to bump around better with big men in the paint.

His off-season progress was momentarily slowed due to an injury to his knee, but he says he is stronger now.

McDuffie said the area he improved the most was ball handling.

They’ll each agree they’ve improved, but acknowledge there’s room to grow. They’re excited to see what a new team will look like with new leaders emerging.

“Let’s see what happens when we get to the point when we have to make the plays in crunch time,” Brown said.

In WSU’s exhibition opener with Augusta, Brown entered the starting lineup in the shooting guard position, McDuffie entered in at the small forward.

Uncertainty sits in the rotation, but confidence does not.

“We’re going to turn some heads and show you a lot this year,” McDuffie said.