Spice Merchant offers spices, coffee, teas from around the globe 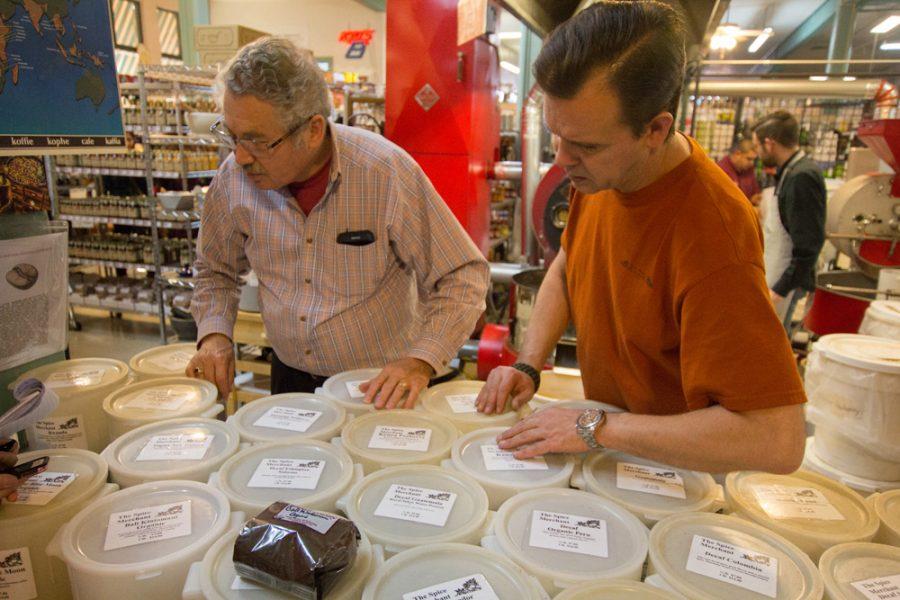 Owner Bob Boewe sorts through his stock of coffee. Boewe started the Spice Merchant over 30 years ago and still manages the store to this day.

A colorful array of exotic spices, nearly 80 varieties of coffee and an assortment of hundreds of teas from every corner of the earth meet at the intersection of Douglas Avenue and Cleveland Street in Wichita.

The Spice Merchant, a one-of-a-kind local business where an intoxicating whirlwind of fragrant spices greets you at the door.

Owner Bob Boewe spoke over the bellow of a shiny cherry-red coffee roaster that would dwarf an average-sized man. He leaned over tubs of assorted coffee varieties to point to a map charting the dozens of countries around the world where The Spice Merchant’s green, unroasted coffee is imported from Ethiopia, Zimbabwe, Yemen, Papa New Guinea, Mexico and Honduras, to name a few.

Boewe lamented about political unrest in Yemen and Zimbabwe can affect coffee imports.

He compared coffee growing from around the world to grape growing for wine.

“You take the same plant and plant it on a different side of the valley and you get a different taste,” he said.

The Spice Merchant was born in 1980 in a small building across from Wichita East High School, 2301 E. Douglas Ave., inspired by ethnic grocery stores in St. Louis, where Boewe attended graduate school.

“At that time, of course, there wasn’t any internet so I spent hours and hours at the public library in their business section researching suppliers and everything,” he said. “We started finding wholesale spice companies and tea companies and we just built our business from there.”

They moved to their current location on 1308 E. Douglas Ave. in 1994. Boewe, who had worked in the field of social work, prided his business on being the longest-standing coffee roaster in town, roasting beans in-house since 1985.

“We were selling so much coffee that it was hard to keep up with the supply,” Boewe said. “By being able to roast our own, we were able to have total control over quality and availability.”

The most popular coffee flavor is a blend called ‘Jamaican me crazy,’ an aromatic assortment of a nutty flavor with hints of vanilla, caramel and rum.

“All the blends that we have here, we have been roasting the same blend since 1985,” Boewe said. “If it works, don’t change it.”

Boewe said the store’s unique nature is what keeps Wichita residents coming back after 37 years.

“We’re not a cookie-cutter box store,” he said. “A lot of my customers have been with us forever.

“If you’re not passionate about what you do, you shouldn’t be in business,” Boewe said. “Everything that’s done here — whether it’s picking up, mopping the floor, straightening up — I do, along with everybody else. And I see (business owners) that hire people to do that for them. That’s bullshit. If you’re not doing the job yourself, you don’t know what your business is about.”