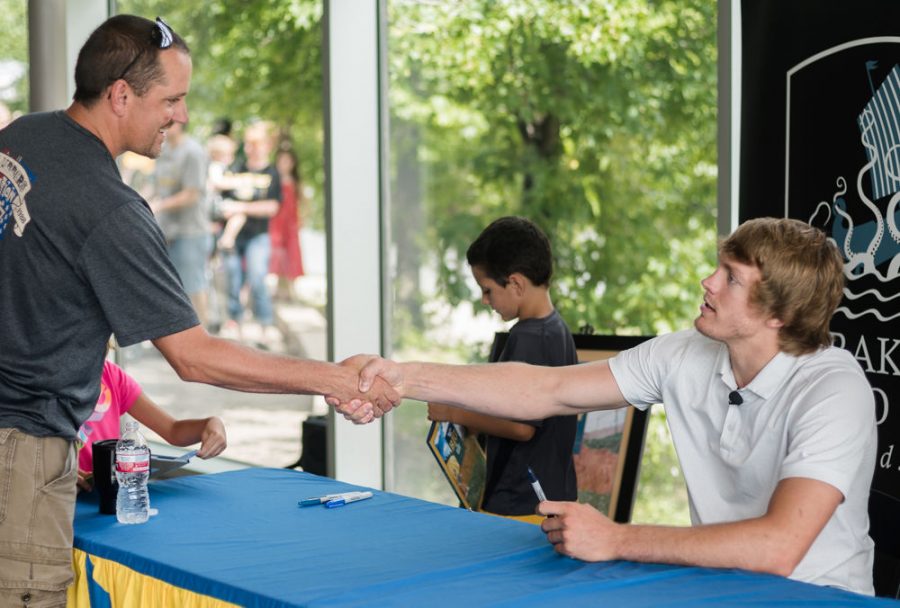 Former Shocker basketball player Ron Baker shakes the hand of a fan during the children's book signing event at the Exploration Place Friday morning. The book is called "You're Too Big to Dream Small" and hopes to inspire many children to do great things in life.

Keep your blinders on — this is advice Ron Baker said kids need to know.

“Try and avoid distractions,” Baker said. “People these days tend to want to try to drag you to bad decisions or outside of your comfort zone. I just tell them to be yourself. Don’t let anybody try to pull you out of your path.”

This advice was given during Baker’s book signing Friday at Exploration Place. Baker spent the morning and afternoon signing copies of “You’re Too Big to Dream Small,” a children’s book based on his life story, published through Kraken Books. Over two thousand were in attendance throughout the day, according to Kraken staff.

“I think being yourself and being how you were raised is an easy way to motivate kids,” Baker said. “I’m not a kid that tries to be someone I’m not, so being myself and treating people with respect and doing those little things that I was always taught to do reflects on other people and that’s why people look up to me.”

Copies of the book were available for purchase at Exploration Place, in addition to pre-ordered copies.

Fans young and old waited in line for an autograph and photo opportunity with Baker. Young fans cited the characteristics they admire in Baker: his work ethic, sportsmanship and athleticism.

“I’d love to have him as my son, let’s put it that way,” Henry said. “Or my son-in-law. I think for me the children’s book is a good idea, because I’ve got grandkids and this is a good book for them to aspire to.”

Retired school teacher Bernice Westerok said Baker exhibits the character traits that every kid should have.

“He’s generous, very generous,” Westerok said. “When I started watching him I got hooked. He’s taking me from college to the NBA. I’m not a big TV sports fan, but he brought it out.”

Baker said a children’s book seemed like the right way to get his story and message out.

“I think catching kids at a young age and trying to teach them no matter where you’re from, or who you are, or what your last name is, you can always work hard and get where you want to be,” Baker said.

Jefferson Knapp, the book’s author, said he reached out to Baker in December about doing the book, sending him one of his other children’s books to show him what he could do.

“It was the bait, he took it and we were able to create an awesome story for young children,” Knapp said. “His story would be incredible to see in a children’s book and he could reach a younger audience. So it was just a chance.”

Knapp said his team had a small window of time to make the book happen before Baker reported to the NBA.

As for his own personal role models, Baker said he has three.

“Kirk Hinrich, who played for KU, was a guy I looked up to,” Baker said. “I enjoyed watching him play. But the two most important people I look up to are my parents. They taught me the little things in life, and those are things I’ve learned to do each and every day.”

Baker said he is excited about his future with the Knicks, but knows he won’t forget his roots.

“I was back in Scott City yesterday and here today and everyone is very excited about my future, so I know I’ll have a community backing wherever I go,” Baker said.