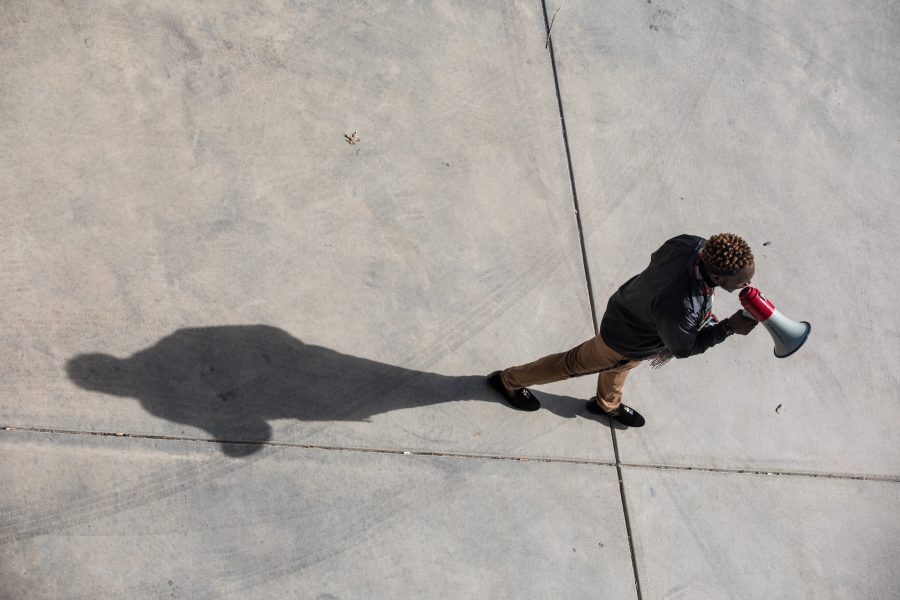 Student body president Joseph Shepard speaks to the crowd during the “No Ban, No Wall” peace rally held outside of the Rhatigan Student Center on Tuesday afternoon. The rally showed love and support to anyone who felt relegated after President Trump’s recent executive orders. Shepard and speakers insisted that everyone no matter or country of origin is welcome on WSU’s campus. (Jan. 31, 2017)

“I think we should applaud our president (Bardo) for being vocal and standing up for our undocumented students,” Student Body President Joseph Shepard said.

“Nevertheless, I think that he must acknowledge that there were people behind the scenes advocating for this, helping him understand why it is vital for us as an institution to take a stance on this issue.”

He also said that Bardo’s statement would not have happened had it not been for “students apply(ing) pressure.”

Student Government Association passed a resolution in December requesting that President Bardo sign a statement in support of DACA and declare WSU a sanctuary campus, meaning the university would protect undocumented students “by providing legal assistance and refusing to voluntarily assist with the deportation of students unless legally compelled to do so.”

The resolution, which cited President Trump’s plans to “immediately terminate” DACA within his first hundred days in office, was also sponsored by Black Student Union and the Hispanic American Leadership Organization. Shepard described the initiative as “student-led and student-driven.”

Tracia Banuelos, diversity task force chair for student government, said that she and Shepard arranged for DACA students to meet with Bardo to speak about their concerns and struggles and what a sanctuary campus would mean to them. She said that her and Shepard were not allowed in the meeting.

“Students should be able to meet with any official of the university without an SGA filter,” Heldman said.

Banuelos said “we didn’t even know (Bardo) was going to release a statement.”

Shepard said he thought students were being left out from taking the lead.

“It’s a good step forward but it doesn’t help bridge the divide that SGA has (with) the administration. It was a collaborative effort.”