Behind the bench: Five questions with Lynn Marshall 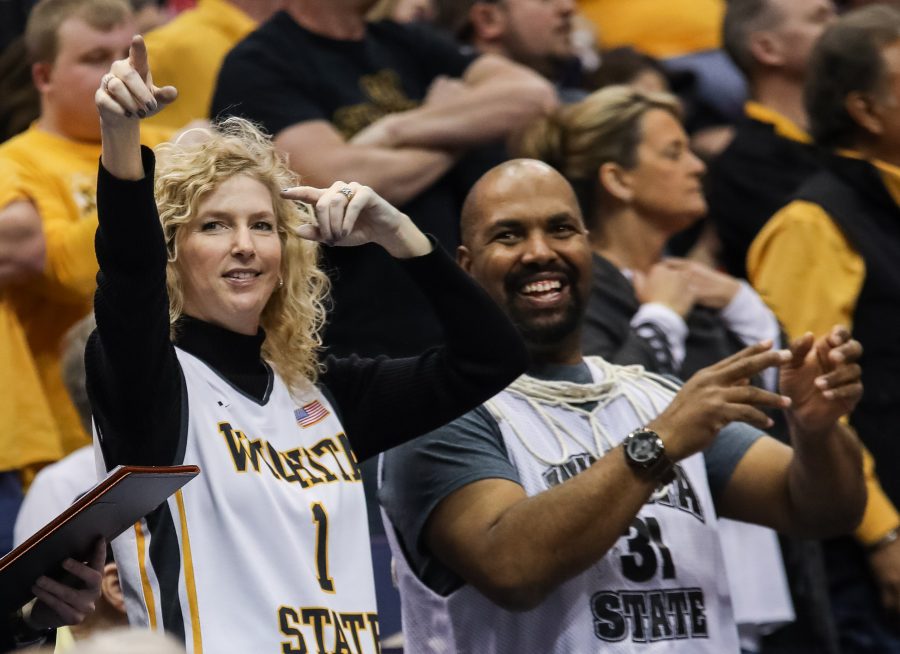 Head coach Gregg Marshall's wife Lynn points to the cheerleaders and pep band during a cheer after the Shockers 82-56 victory over Bradley.

Lynn Marshall, wife of head coach Gregg Marshall, provided us with an inside look at her role behind the Shockers’ bench.

Q: What makes you nervous about the games?

Lynn Marshall: I get nervous about three hours before the game. My stomach hurts and I want to win so badly. Even though I’ve been doing this with Gregg for almost 30 years, I just get nervous before every game; it’s just part of the deal.

Q: What’s been your favorite memory so far?

Lynn Marshall: I would say when we beat Ohio State; going out, running out on the court. It was surreal. It was like I couldn’t feel my body. I just jumped into Gregg’s arms. I couldn’t believe that we won, that we were going to the Final Four.

Q: How would you describe this year’s team?

Lynn Marshall: I love these boys. After 30 years with Gregg, this is my favorite team. I’m closest to this team. I said before we went to Montreal, “I want to get to know these guys; we’ve got so many new guys and I’m going to go out of my way to tell them ‘Hey, come sit with me at dinner, let’s talk, I want to get to know you guys.'” They’re really sweet and they’re personable kids and they’re very genuine.

Q: Were you a basketball fan before meeting Gregg?

Lynn Marshall: Yes, I was a basketball player in the old days, the ’70s, ‘80s, ‘90s, so absolutely. I played college basketball and played basketball my whole life.

Q: What phrases do you yell most during games?

Definitely yell for defense, that’s why I got this [Zach Brown] jersey on because that’s my guy. I appreciate him so much, he’s a worker and people don’t recognize what he does.