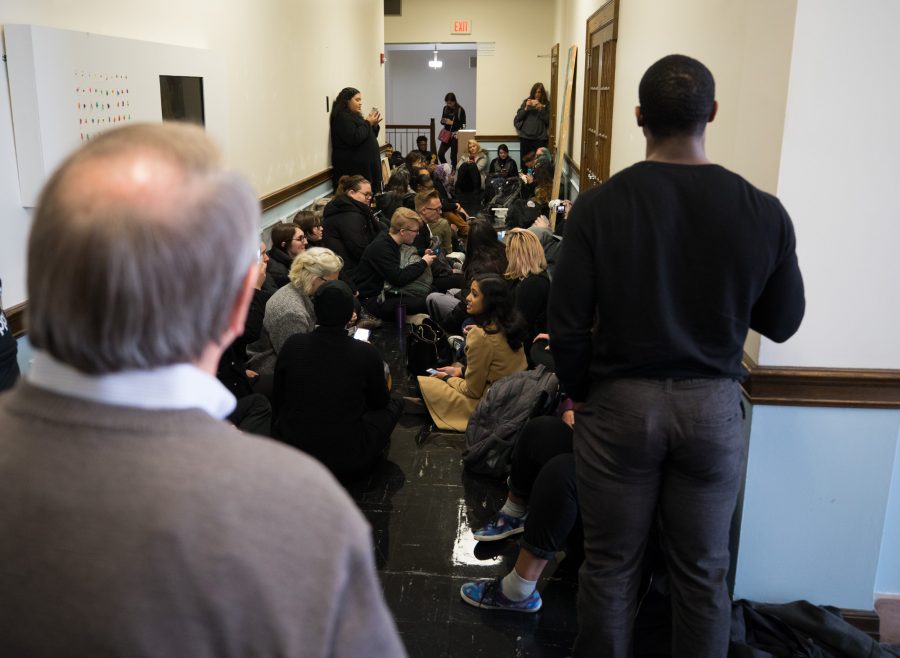 Lou Heldman, vice president of strategic communications, foreground, looks at a group of student protesting outside go John Bardo’s office. The group were demanding transparency and to know what happened to Eric Maki. (Mar. 14, 2017)

The group, We The Students, intended to march from the Grace Memorial Chapel to Morrison Hall and up to Bardo’s office to have the sit-in there. But university police Cpt. Guy Schroeder was waiting. He stood in front of the door to Bardo’s office and would allow only three students to enter.

Anna Weyers, director of operations for the president, said Bardo was at an off-campus meeting and would not be available until possibly after spring break.

Seated along the walls outside the president’s office, the group presented a list of three demands, including calls for transparency, shared governance and better representation for marginalized student groups.

About forty-five minutes into the sit-in, university General Counsel David Moses addressed the group, asking them to move to the Grace Memorial Chapel and continue the discussion there.

“This is not an appropriate meeting place,” Moses said.

Students declined to move and demanded to hear from President Bardo directly.

“We are here to be disruptive,” student Kavya Natesan said. “Our education has been disrupted by the administration.”

“We are being very polite,” said a student whose name was removed from the online version of this story after careful consideration of transparency and after The Sunflower learned she was a domestic violence survivor who did not want her name included. It’s important to note that the student publicly identified herself by name at the sit-in, which took place in a public setting in front of several live streaming cell phone cameras and local television station cameras.

“You want to move this behind closed doors,” the student said.

Natesan said that Vice President for Student Affairs Teri Hall once suggested that Muslim students use a janitor’s closet to wash themselves and pray, instead of pushing for the installation of wash stations.

Natesan said the renovations “Wouldn’t be as big of an undertaking as Innovation Campus itself.”

Provost and Senior Vice President Tony Vizzini said that Hall was not there to defend herself.

“I do not think it is appropriate to send somebody to the janitor’s closet to pray,” he said.

Students questioned if he was forced by the administration to quit his position.

Vizzini said he could not comment on the details of Maki’s resignation because they relate to personnel matters.

“I do not know the specifics of that episode,” he said. “I was not present.”

Vice President for Strategic Communication Lou Heldman addressed students’ concerns regarding transparency on the part of the administration. “(Bardo) speaks regularly to student organizations. He’s gonna start another round of that after spring break.”

Heldman said it may be a while until students hear back from Bardo. He said Bardo will be at the Kansas Board of Regents meeting tomorrow and will be traveling with the Wichita State Men’s Basketball team to tournament games in Indianapolis immediately after.

“A considered response is probably a couple weeks away,” Heldman said.

“There’s no shortage of answers,” he said. “We respond to questions all the time.”

Randy Barbour, a doctoral student and spokesperson for the group, said — at the conclusion of the sit-in — that this is only the first step for students engaging in the process of shared governance.

“This is just a moment,” said Barbour. “We are starting a movement.”

If their demands are not addressed by 5 p.m., Wednesday, protesters said they will “turn up the energy.”

“Students have been lulled to sleep by promises made by the administration,” Barbour said.