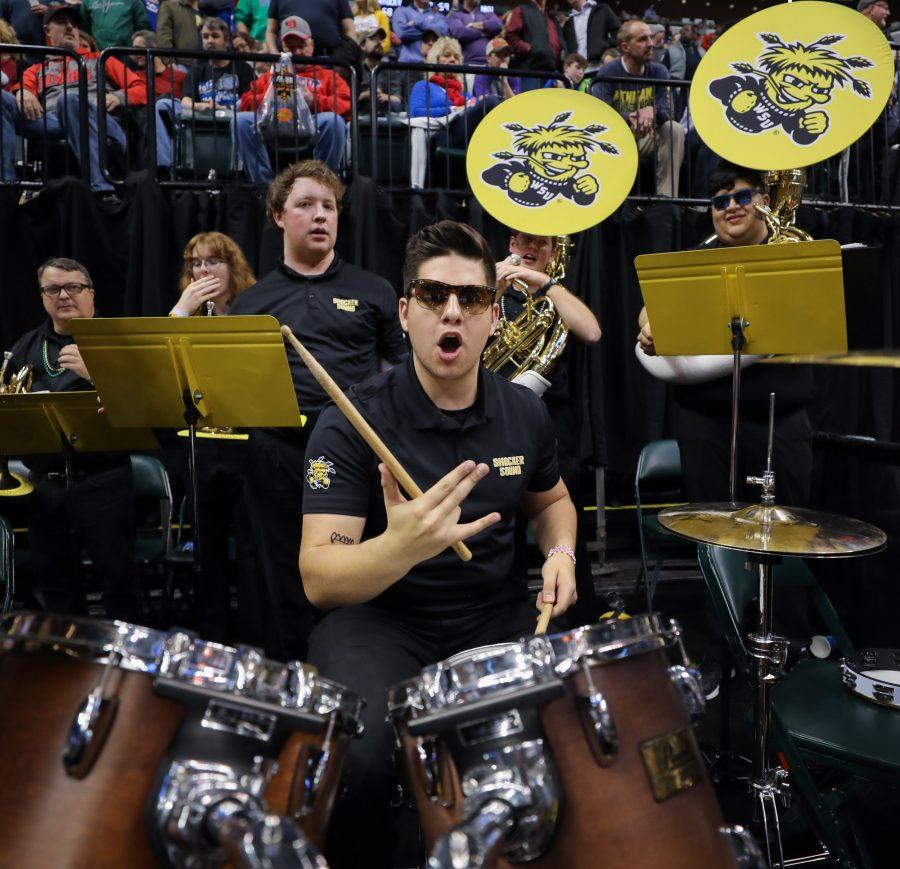 A member of the Wichita State band celebrates the Shockers’ 64 – 58 victory over the Dayton Flyer at Bankers Life Fieldhouse in Indianapolis. (Mar. 17, 2017)

You hear them every game. They’re that group of rowdy musicians who yell during the game, shake their keys when the Shockers are about to win, and lead the crowd in being loud during timeouts.

This group of instrument toting students are present at every home and tournament game.

Jeremy Thomas, a member of Shocker Sound, said the cheers and chants the band uses throughout the game are important to the environment.

“They start to bridge the gap between the band and the student section,” Thomas said. “We start to cheer together, we get to have moments together.”

Thomas has been a member of the band since the 2012-2013 season and traveled to the Final Four. Part of that trip included the “Battle of the Bands” competition between the pep bands of the remaining four teams in the NCAA Tournament.

“At first, it was a little intimidating just because you see some of the band directors whose names are iconic in the band world,” Thomas shared. “But once we got in there and settled down and everyone was feeling what we were putting down, we all relaxed and had fun with it.”

Shocker Sound won the Battle of the Bands in 2013.

“It felt good [to win], because this little no-name school with a mascot that they didn’t understand, came in and tore up the house,” Thomas said. “It was cool to put Wichita State on the map.”

Each season the band tries new chants and they keep the ones that the fans latch onto.

One of the new ones from this season is the “Little Red Wagon” chant the band yells during opponent free throws.

Alberto Marturino was one of the band members who worked with Thomas to use the chant during men’s basketball games. The words are based on the Miranda Lambert song of the same title.

Marturino said they had used the chant – which says, “you can’t ride in my little red wagon, the axel’s broke and the wheels are draggin’ – in women’s tournament games but decided to use it during the men’s games this season.

“Now that I actually have a little red wagon and people can hear it, I’ve been asked at least once a pep rally and whenever we’re walking around, ‘What’s the red wagon about,’ Marturino said. “It’s really interesting because that’s the point of the chant. It gets more inaudible every time.”

Another well known song Shocker Sound plays is “War” – “you don’t want to go to war with the Shockers; don’t start no stuff, won’t be no stuff.”

Wyatt Vieux, a drummer for the band, said they use “War” to get Shocker fans excited before and during games.

“We use that when Gregg Marshall either comes down for a pep rally or comes down at send-offs before tournament games,” Vieux said. “[We also use it] when we’re in a position of power during the games, if we’re winning.”

Thomas shared how his favorite memory from his time in the pep band was when the band played “War” after the Shockers beat number one ranked Gonzaga in 2013.

“When we did that, Gregg Marshall and the team came over and apparently they knew all the words and everything,” Thomas said. “They came over and started dancing.”