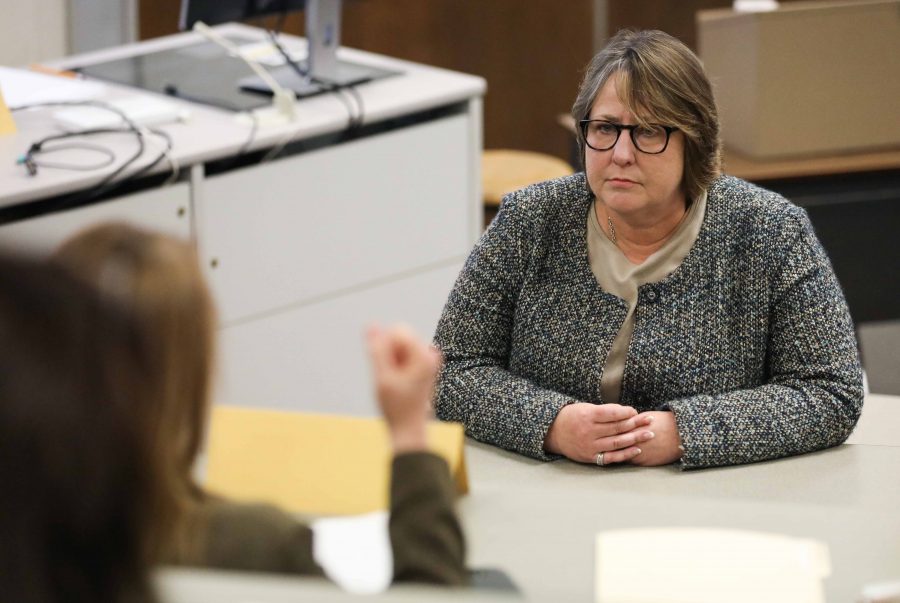 Representatives from activist group We the Students spoke at faculty senate on Monday to present their concerns to and answer questions from faculty members. Among the concerns were comments allegedly made by Vice President of Student Affairs Teri Hall recommending that Muslim students use a water bucket in a janitor’s closet to wash themselves in order to pray.

The alleged comments came in response to a push by students for the installation of a wash station on campus to accommodate Muslim students and allow them to pray.

Students have reported seeing signs posted at several bathrooms around campus, including one in Neff Hall, asking that students not wash their feet in the sinks.

The issues the group presented echoed the focus of the sit-in held in President Bardo’s office as well as a vote of no confidence taken by the student senate, both of which took place earlier this month and were led by the group. These include a perceived lack of transparency from university administrators, shared governance, recent unexplained resignations on campus, sexual assault and the interfaith prayer space.

Taben Azad, who served as student body vice president until his suspension last week, was one of the speakers for the group.

The alleged comments have been cited extensively by activist group We the Students — and others — to point out the university’s alleged unwillingness to accommodate Muslim students.

Teri Hall was invited to the faculty senate to address the concerns raised by students.

Hall denied recommending Muslim students wash their feet in a bucket in a janitor’s closet.

“What I did say when I met with the Muslim Student Association executive board, I said that construction is going to take some time. And that what we could do is take a janitor’s closet, take it offline, clean it up, get stools in there, as a place that could be used until some construction could take place,” Hall said.

“That was a short term solution that I offered that has been wildly misquoted and exaggerated in all kinds of ways,” Hall said.

One faculty senator said he was concerned that students were this upset.

He cited the revolving door of the Student Affairs department and addressed Hall when describing a “clearly unhealthy relationship between you and the people you’re supposed to be representing.”

Hall acknowledged that the relationship between university administration and the current student government cabinet is a tense one. She said she hoped that would change when a new cabinet is elected in April.

“It’s not untypical when a new advisor comes in that there are problems,” Hall said.

“My plan was, we have (SGA) elections in a week and then, when those new folks are elected, to really focus on a relationship with them,” Hall said.

“I came into relationships that are broken already — and I’m sure I haven’t done anything to help them,” Hall said.

“But I don’t know that I could have done something to help the rift between SGA and the administration.”