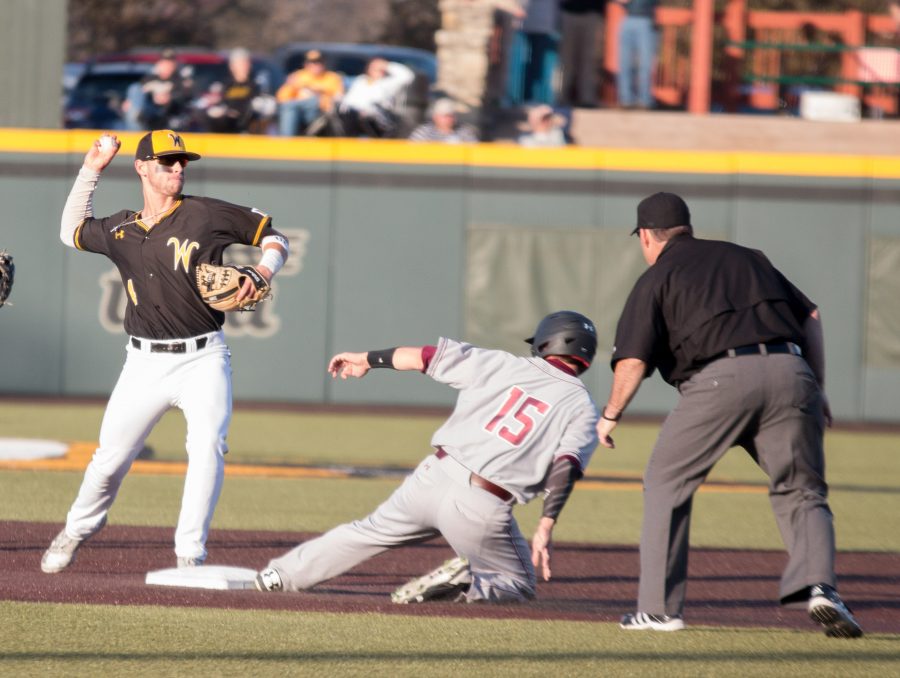 Wichita State squandered a 5-1 lead to drop the second game of the weekend to Southern Illinois on Saturday.

SIU collected 14 hits en route to the 11-8 victory on Saturday afternoon, despite a ferocious last-ditch effort by the Shockers in the ninth inning.

“We’re playing good baseball,” head coach Todd Butler said. “We didn’t pitch very well today, but we swung the bat well, and the defense was good. They just came back and scored 11 runs.”

WSU jumped early on SIU’s starting pitcher, Michael Baird. Sophomore Greyson Jenista doubled to lead off the game for the Shockers and sophomore Travis Young followed with a single.

Senior Willie Schwanke walked to load the bases and a balk from Baird allowed WSU to take the early 1-0 lead.

WSU scored again in the second inning, with Jenista playing a key role in the inning. He doubled in junior Gunnar Troutwine, who singled earlier in the inning, to give the Shockers a two-run lead.

Freshman Tommy Barnhouse, making his fifth start of the season, rolled through the first four innings for WSU, allowing only three hits and one unearned run.

The bats came alive for the Shockers in the fourth inning. With Dugas reaching on a single, Jenista walked to put runners on first and second, and Young singled to load the bases for sophomore Alec Bohm.

On an 0-2 pitch, Bohm erased what had been a frustrating day with one swing of the bat. He doubled to right-center field to clear the bases and give WSU a commanding 5-1 lead.

Not wanting a repeat of last night, the Salukis mounted a furious comeback the very next inning.

Barnhouse allowed back-to-back doubles to Ryan Sabo and Dyllin Mucha before coming out of the game in favor of junior Tyler Jones. Jones walked the first batter he faced on four straight pitches, and after throwing one ball to the next batter, was pulled for senior Reagan Biechler.

The Salukis would score twice with Biechler pitching to cut the Shockers’ lead to one.

From the fifth inning onward, it was all SIU.

The Salukis tacked on single runs in the sixth and seventh innings to take the lead, 6-5.

After a walk from junior Chandler Sandburn, a sacrifice bunt, a run-scoring double, and another walk, he was pulled for junior Adam Keller.

Keller labored to finish the inning, allowing a single and a triple before retiring the final two batters. When the dust settled, SIU held a comfortable 10-5 lead over WSU.

SIU tacked on another run in the ninth inning courtesy of Sabo when he singled up the middle, scoring Nick Hutchins to push their lead to 11-5.

The Shockers mounted a furious two-out rally in the ninth inning. Sophomore Josh DeBacker walked to begin the inning. Junior Trey Vickers followed with a single. With one out, Dugas grounded a ball just beneath the glove of SIU shortstop Will Farmer to load the bases.

Jenista and freshman Jacob Katzfey both walked to score two runs, and another run would score on a wild pitch before Bohm popped out to first base on a 3-0 count to end the game.

“He’s one of our power hitters so I made the call to let him go 3-0,” Butler said about giving Bohm the green light to swing in the situation.

The loss puts WSU’s record at 15-15 overall, and 1-1 in Missouri Valley Conference play.

Wichita State is back in action in the series finale against Southern Illinois tomorrow at 1:00 p.m. at Eck Stadium.