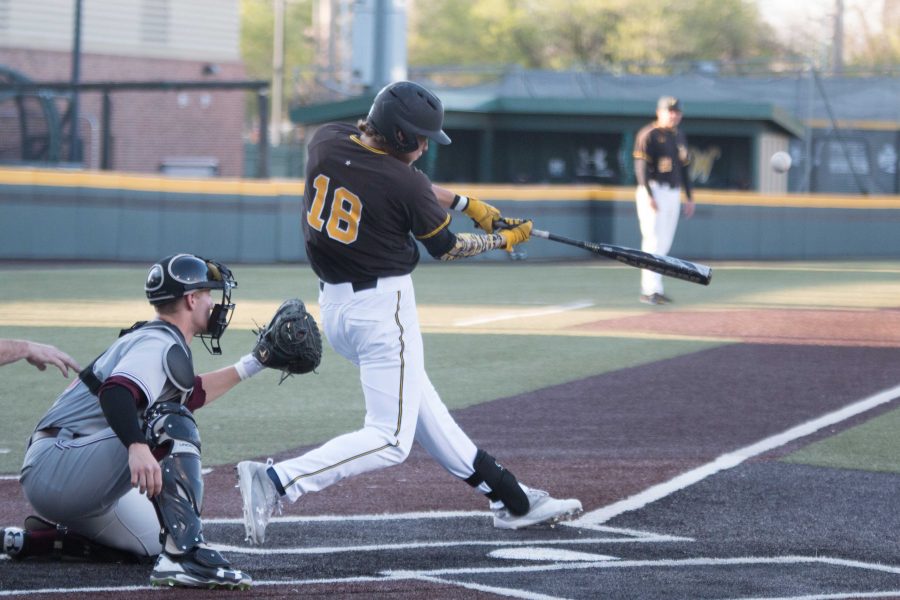 Sophomore Alec Bohm hits a home run during the game against Southern Illinois.

Not even 24 hours after suffering an 11-8 loss against Southern Illinois, Wichita State’s offense exploded for 17 runs en route to a 17-7 run-rule victory over the Salukis Sunday afternoon.

“It was good to see the bats wake up and score some runs,” head coach Todd Butler said.

The game did not start well for WSU. A string of three straight errors by the Shockers gave SIU an early 1-0 lead.

“We had five errors today, and I was very disappointed about our defense,” Butler said.

Sophomore Alec Bohm quickly gave the Shockers the lead in the bottom half of the first when he launched his fifth home run of the season, a two-run shot to straightaway center field.

Nick Hutchins began the second for SIU with a double off of WSU starter Cody Tyler. He would come around to score on Ryan Sabo’s sacrifice fly, tying the game at two.

“The big thing was as a starter you’re not going to have your best stuff every outing, and I don’t think I had my best stuff today,” Tyler said. “You just have to work with what you’ve got and battle for your team.”

With one out, Bohm and senior Willie Schwanke singled in the bottom of the third. Sophomore Dayton Dugas walked to load the bases for junior Trey Vickers.

Vickers ripped a single to score Bohm and Schwanke, and freshman Alex Jackson followed suit with a single of his own.

Freshman Noah Croft drew a walk to keep the line moving, and sophomore Jordan Boyer was hit by a pitch to continue the inning for the Shockers.

Sophomore Greyson Jenista nearly cleared the bases on a line drive to center field, but a stellar, diving catch by Dyllin Mucha kept Jenista off the bases.

In true fashion of keeping the line moving, Young was hit by a pitch following Jenista’s at-bat.

Bohm and Schwanke both singled again, the second hit for both of them in the inning, before Dugas flew out to left field to end the inning, with WSU now leading 10-2.

SIU scored twice in the fourth inning to cut the WSU lead to six.

The Shockers’ bats came alive again in the fifth.

Or, more accurately, the batters became more patient—using opportunities from five free passes from SIU pitching. Schwanke, Vickers, Jackson, and Boyer drew walks and Croft was hit by a pitch in a six-run fifth for WSU to up their lead to 16-4.

The Salukis put together a two-out rally in the sixth inning off of sophomore Robby Evans in relief of Tyler. Dugas misplayed a fly ball in right field, allowing SIU to clear the bases and cut WSU’s lead to nine.

Leading 16-7 in the bottom of the seventh inning, WSU managed to load the bases, needing only one run to win by the Missouri Valley Conference’s run rule.

Young provided that run, grounding into a fielder’s choice to third base that was misplayed by Sabo when he sailed the throw over the catchers head, allowing Jackson to score the winning run.

“Hopefully as a unit we can all get rolling after this win,” Tyler said.

Bohm, Jackson, and Vickers all had three hits and scored three runs for WSU in the win. Bohm also tallied four RBIs on the day.

Wichita State plays next on Tuesday at the University of Kansas at 6 p.m.