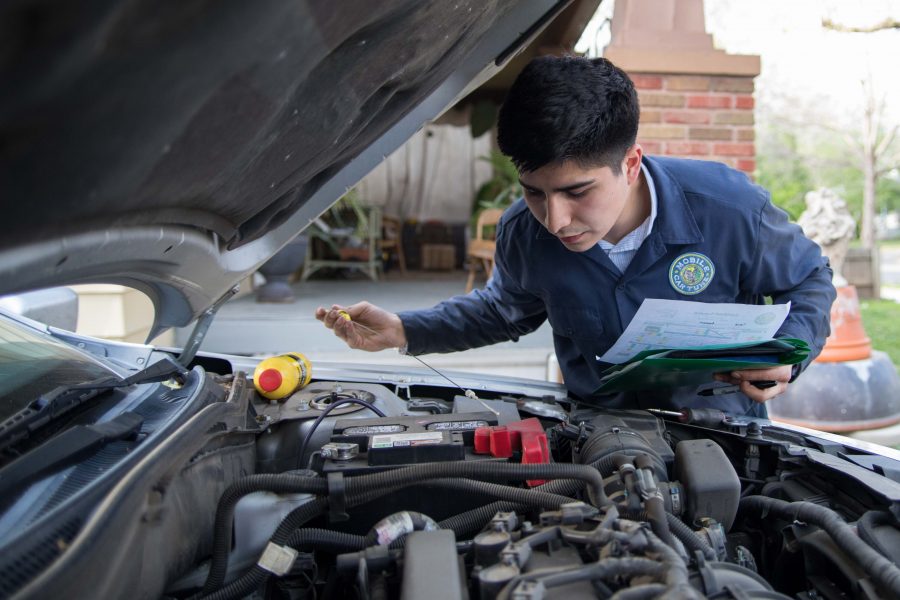 When it comes to starting a business you have to find a product or service to offer and a way to raise money to get the idea off the ground.

Since its start, Mobile Car Tune has serviced more than 150 vehicles.

This service is in addition to the classes and other jobs they hold.

The company began with Jose who worked on the business plan as a part of the Youth Entrepreneurs Kansas program at his high school.

“After high school I didn’t really do anything with it until I got laid off from my job,” Jose said. “I thought I could go back to working at O’Reilly or try something new, so I ended up trying it out and it started to work.”

Jose asked Ernie and Galicia to join to ensure the business became a success.

Customers are able to request service for their vehicle by calling, texting, messaging, or by email. The customer is then connected to a mechanic who drives to the customer’s location and fixes the car.

“Our services include brakes, oil changes, struts, shocks, suspension, belts and filters,” Ernie said. “It’s a pretty easy going process for the customer. We want it to be as seamless as possible.”

Ernie said the group has researched what customers need from mechanics so that they can provide the best service possible.

“We’ve learned all the complaints people have about going to the shop,” Ernie said. “People don’t trust the shop or they don’t like that they upsell extra services at the end. That’s something we really took into consideration as we were developing this business.”

Galicia said WSU has played a major supporting role in the venture.

“We’ve grown a lot and it’s definitely been thanks to Wichita State University,” Galicia said. “There are so many resources for startups.

“The Center for Entrepreneurship has been incredibly helpful in mentoring and guiding us and we were also part of the I-Corp which helped us validate our business model.”

One of the resources has been the Barton International Group (BIG), a student-run enterprise on campus. Galicia said she and Ernie have both been a part of BIG in the past.

“They were looking to highlight local businesses and they chose us,” Galicia said. “We got to work with them to shoot a video at Ernie’s house to show them who we are and what we do. They put it all together for us.”

Ernie said the relationships their team builds with customers is important to their success.

“Our customer response has been awesome,” Ernie said. “I think that’s what has been the driving factor; we get a lot of really beneficial comments. We love hearing what our customers have to say, both online and in person.”

The success and growth Mobile Car Tune has experienced is something that stands out as a remarkable situation, Jose noted.

“From where I started — having days, weeks and months with only having one [repair] job — to now where we are flooded with phone calls it’s just completely amazing and it could not have been done without our team,” Jose said.