Between a rock and a hard place: Teri Hall reflects on her role as VP of student affairs 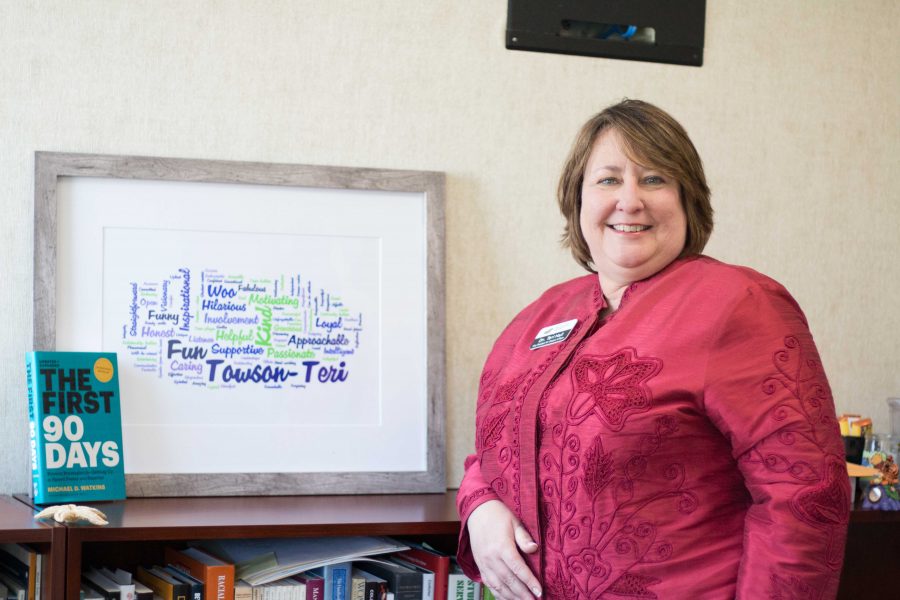 Those words hang in a framed wordle — or “word cloud” — on the wall in Vice President for Student Affairs Teri Hall’s office, where she regularly meets with students and staff.

Hall said the wordle was a going-away present from students at Towson University — where she worked for 18 years before she accepting the job at WSU. The words are those Towson students used to describe her.

“That’s the person that I am, and I felt like for the longest time here, nobody knew those things about me,” Hall said.

Hall started working at Wichita State in January, and if WSU students were asked to describe her based on initial impressions, those words would undoubtedly be much different.

“She’s been framed as being some sort of villain,” Hungate said. “I think that’s an unfair way to categorize her.”

Since starting at WSU, Hall has been swept up in the rocky relationship between student government and the administration, which culminated in a student senate vote of no confidence in President John Bardo’s ability to serve in his role.

She’s been accused of telling Muslim students to pray in a janitor’s closet — an accusation she vehemently denies — and of putting the corporate interests of the university above the interests of students.

Hungate — who other students have said Hall has shown a bias towards, abstained from the no-confidence vote, and voted “Yes” for the controversial student fee increase for a YMCA on Innovation Campus — said she would describe the relationship between SGA and the administration as “tension-filled” with “no compromise” between the two.

“There have been faults on both sides,” Hungate said.

As a member of the president’s executive team and the vice president for student affairs, Hall has had a large role to play on both sides of the controversy. After Christine Schneikart-Luebbe resigned, Hall assumed the role of SGA advisor. She also serves at the pleasure of the president.

“How do I balance that?” Hall said. “I see my role as more of a communicator … so I try to pull in students to help them see themselves in Innovation Campus.”

Hall said she thinks of Innovation Campus as a way to bring together the city of Wichita and the university in one space, which should bring forth opportunities for students all across the board. She didn’t say what those specific opportunities were.

Sophomore Terence Truong said he didn’t understand the “severity of this distrust” between student government and Hall until he accepted a position as an election commission student observer. Truong said he was instructed by SGA Vice President (and former-Election Commissioner) Taben Azad to avoid Hall and not to trust her because it seemed she was biased in favor of Hungate’s United We Stand ticket. Hall later removed Azad from his position as Election Commissioner after complaints by student observers. Truong then assumed Azad’s position — along with Sam Belsan — as an election co-commissioner.

The distrust certain students feel towards Hall because of her position has spread to other students, Truong said.

“She wants to advocate for students and she made sure we had a fair election process,” Hungate said.

Hall said she is used to having a close relationship with student government.

“Somehow the person I became quickly here is not at all the person that I know that I am,” Hall said. “Which was quite hard, frankly.”

Fortunately for her, Hall said she is starting to see the light at the end of the tunnel.

“Students are finally getting to know me,” she said.

Hall said the longer she is at WSU, the easier her job is going to become as she becomes accustomed to students and the functions of Wichita State.

Looking back at the last few months, Hall said she thinks she has done “O.K.”

“Maybe I would have spent more time with some student leaders,” Hall said.

She said she thinks she was a little naive about how quickly she could help bridge the rift between administration and SGA when she started.

Despite all of the challenges, Hall said she is still glad she decided to come to WSU.

“When my name has been bashed around, I just stick to my values and what I know to be important,” she said. “I continue to know this was the right choice for me.”