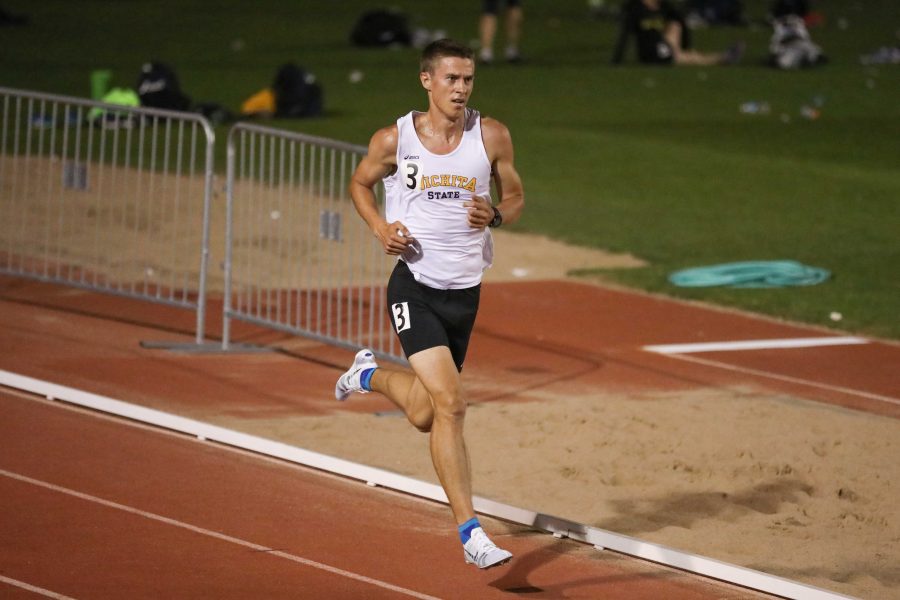 Senior distance runner Ugis Jocis races toward the finish line in the 5,000 meter run at the KT Woodman Classic on Friday night. Jocis won the race and claimed his U.S. personal record with a time of 14:35.55. (Apr. 14, 2017)

The KT Woodman Classic continued on Friday evening at Cessna Stadium with the Distance Carnival. After six events have been scored, both Wichita State teams lead the meet in points — the women with 60 points and the men with 45 points.

Sophomore Rebekah Topham and senior Ugis Jocis claimed the top spots in their races — both earning additional accolades en route to the top of the podium.

Topham, racing in the women’s 5,000 meter run, claimed the tenth all-time slot in WSU history finishing the race in 16:53.24, 12-hundredths of a second ahead of former Shocker Tonya Nero who took second. Senior Sidney Hirsch joined Topham with a third-place finish in 17:23.21.

In the women’s 1,500 meter run, senior Emilea Finley took second place behind Courtney Griffiths of Cowley County Community College with a time of 4:46.10. Finley made a final push for the finish, but crossed the line nine-hundredths of a second behind Griffiths.

Freshman Deidra Walker had a strong performance in the women’s 10,000 meter run finishing second in 37:30.38.

In addition to the strong showing by the distance runners, the Shockers also claimed points in the javelin throw.

The KT Woodman continues on Saturday with sprints. The Envision 100 meter dash — for athletes who are blind or visually impaired — kicks off the last day of competition.