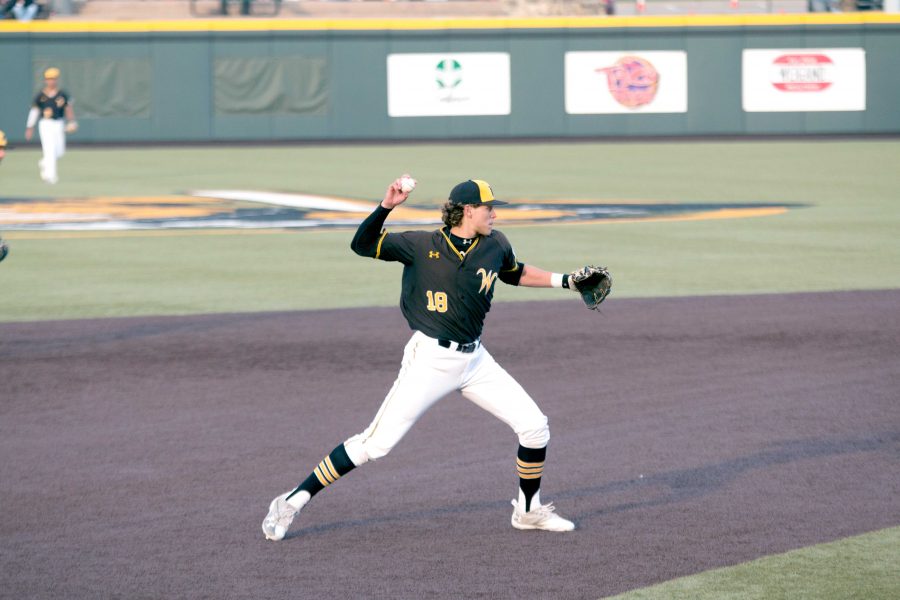 Wichita State sophomore Alec Bohm throws to first base during a game against Valparaiso. WSU dropped the rubber match against Missouri State on Sunday. (File photo)

Again, the pitching continued to struggle.

The Shockers dropped the final game of a doubleheader against Missouri State on Sunday 8-1.

MSU’s Hunter Steinmetz walked to begin the game and Jake Burger singled him over to second base before Barnhouse completed a double play. Barnhouse, however, would find himself on the wrong side of the long-ball after Meyer drilled a 1-1 pitch over the right field wall to give MSU an early 3-0 lead.

Senior Willie Schwanke then grounded into a fielder’s choice scoring Dugas —the Shockers’ only run of game two.

The Bears wasted no time in earning that run right back, however, as they would score in the same inning on an RBI single by Alex Jefferson to up their lead to three.

Barnhouse exited the game after the fifth inning. He took the loss, giving up four earned runs in five innings on eight hits and three walks while striking out four batters.

Looking to extend their lead in the seventh inning, the Bears capitalized on a few mistakes by sophomore Connor Lungwitz.

On an 0-2 pitch, Burger doubled to right field. Eierman walked to put runners on first and second before senior Reagan Biechler came in to relieve Lungwitz. Biechler struck out the first batter he faced and got another out on a fielder’s choice that advanced Burger to third.

A walk to Brown and a single by Drew Millas tacked on two more runs for the Bears before Biechler struck out Ryan Skalnik to end the inning.

MSU added two more insurance runs in the eighth inning off of Ben Hecht courtesy of RBI singles from Burger and Graham to push the Bears’ lead to seven heading into the ninth inning.

WSU couldn’t muster up the energy for a rally in the ninth, as Alex Moore retired the side to give Missouri State the sweep over the Shockers.

Doug Still picked up the victory for the Bears, his sixth of the season. His season ERA leads the Missouri Valley Conference among qualified pitchers at 2.18.

Wichita State (18-21) will play next at 6:30 p.m. Tuesday, when they visit former MVC-rival Creighton in Omaha at TD Ameritrade Park