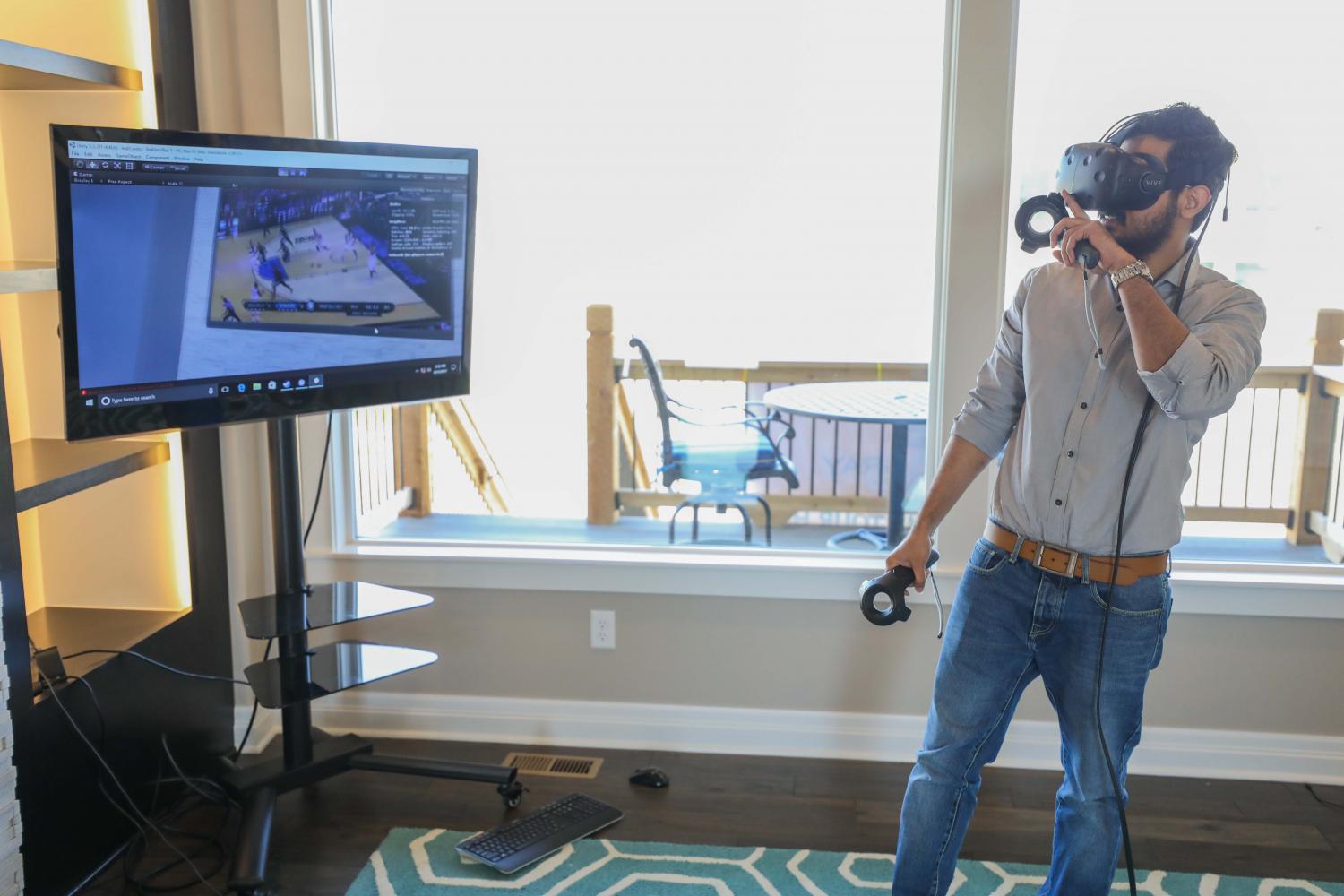 “If I had one or two days to make Flappy Bird I could.”

According to Humam Nameer, computer science grad student, Approximately 6,000 games are added every day onto the iTunes store in hopes of creating a phenomenon like Flappy Bird,  a side-scroller game which accrued $50,000 a day after becoming popular.

Instead of making Flappy Bird in a couple days, Nameer said he worked 36 hours straight in order to put the finishing touches on a virtual reality simulation of a model home for Paul Gray, homebuilder and CEO of Paul Gray Homes, as an intern at GRIT Virtual Construction.

He was brought onto GRIT through Ennovar, a Wichita State University program which connects students to technology-focused companies in Wichita, in order to put Gray’s model home design in a user-friendly virtual environment.

GRIT is a company created by Chris Callen in order to offer services in virtual construction apart from his construction company, Builders Plus Construction. Nameer was brought on in early April in order to help with the “virtual immersion experience” service.

Callen needed someone experienced in Unity, a video game engine, so he contacted Ennovar.

“We’ve identified WSU as a place where we’d like to create a relationship,” Callen said. “Ennovar allows us extended access to expertise.”

Nameer was the man for the job. He already had three years of experience building video games in Pakistan—often using Unity—before coming to Wichita State, Callen said.

When Nameer heard Ennovar was looking for someone experienced in Unity he said he was jumping off of his seat for joy. The problem: he was then working as a front-end web developer for NetApp, a data management business.

While in Pakistan, he said he had worked for a gaming company with about 400 employees called 10Pearls. He helped create different games using Unity, including a few racing games and a shooting game.

After 8 months, Nameer said he switched to making mobile games within the company, where he learned about the 6,000 games per day figure.

“I actually made a game and it went viral pretty quick,” he said. “Suarez (a famous Barcelona soccer player) actually bit another player on the neck… so the game was just Suarez biting other players.”

In two weeks he said his game was downloaded half a million times, but the download rate dropped quickly dropped off.

“Luck plays a very significant part,” he said. “Even if you get all the results and everything you desire it still may not work out.”

Nameer said he decided to quit the video game industry in Pakistan since he was discouraged about how it functioned.

He decided to come to Wichita State after some friends told him about how much they enjoyed the college and eventually got his job at NetApp through Ennovar.

In order to leave NetApp for GRIT, Nameer had to train somebody else to take over his position.

He said he jumped at the chance of working for GRIT because he had already thought of a similar idea himself, integrating civil engineering with VR.

Callen said he got the idea to create VR of model homes on February 8th after presenting his start-up company GRIT at 1 Million Cups, a program designed to connect entrepreneurs.

Gray said engaging with the model home VR helped him realize some problems with his design. He said using the VR model also allows the buyer to check out the building spatially before it is built and gives them a chance to view different paints, furniture, carpeting and other housing options in real time.

In the future, Callen said he hopes to be able to load kitchen equipment into the simulation so buyers can mix and match. He said they also plan to add a color palette by loading in a Sherwin Williams paint catalogue so users can see how different paints look on the house.

Callen compared using VR to showcase a house to using Microsoft Word in order to edit a paper. He said using the VR program to change textures, paints and furniture is like using Word to change fonts and move paragraphs around.

Construction of the house is the printing of the paper, he said.

“It’s a very great idea and I’m very excited about it,” Nameer said. “It’s going to hit… we are on the cutting edge of technology.”