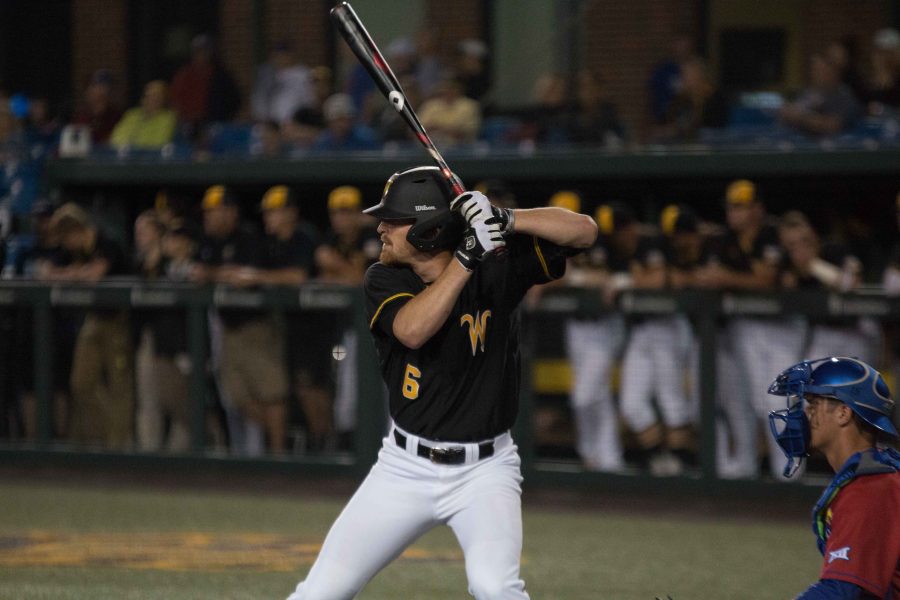 Senior Willie Schwanke watches a pitch at the plate on April 19 against Kansas. Schwanke moved from pitcher to designated hitter this season. (File photo)

As a child developing a love for baseball, Willie Schwanke would drive five hours from Frisco, Texas, to the University of Arkansas for their yearly summer baseball camps.

While participating as a camper in Fayetteville, Arkansas, current Wichita State head coach Todd Butler and assistant coach Brian Walker, who were both assistants at Arkansas, saw the potential that Schwanke possessed on the field.

The two coaches got to know Schwanke and his father, Jim, as Schwanke became a regular camper and when Schwanke’s father would coach against the Razorbacks during his time at Oklahoma State and LSU. When it came time for Schwanke to decide where he wanted to play college baseball, the Wakeland High School graduate wanted to make his choice based on the amount of trust he had in coaches.

With that factor playing a major part in his decision, Schwanke signed his National Letter of Intent to join Butler and Walker at Arkansas.

“Going to the camps really built that friendship and relationship between us two,” Schwanke said. “Having that connection that I had previously before going to college is what made my decision easy to go there.”

Schwanke played in 31 games as a freshman, starting in 22 and contributed 15 hits, five RBIs and one home run. His coaches trusted him enough in postseason play, allowing him to pinch hit in two NCAA Tournament games in 2013 against Bryant and Kansas State.

During that time, Schwanke would spend a lot of time with Walker outside of practice that allowed him get to know the former Razorback player more, Schwanke said. Walker would give Schwanke late night batting lessons to improve his power and technique.

The one-on-one attention allowed Walker to contemplate the abilities the freshman pitcher carried at the plate and give him a sense of how he could build into a dynamic two-way player.

“Willie’s a talented kid,” Walker said. “He was talented when Coach Butler saw him the first time. He comes from a great baseball gene so you know he’s got the baseball IQ. So much of hitting and pitching is being able to understand what you’re doing. He had an advance feel.”

When Butler left Arkansas to become the head coach at WSU and invited Walker to be his assistant, Schwanke transferred from Arkansas after one year. He spent his sophomore year at Grayson College in Denison, Texas before being invited by Butler to play for the Shockers in 2014.

“I recruited him at Arkansas, so recruiting him out of junior college after he left (Arkansas) to go to Grayson probably helped us get him at that time,” Butler said. “He trusted what we were trying to do (at Wichita State) and wanted to be apart of it.”

Even though Schwanke battled through injuries and earned a medical hardship after appearing in just seven games, he was selected in the 22nd round by the Milwaukee Brewers to turn in the 2015 Major League Baseball draft. Schwanke turned down the chance to achieve his goal of playing professional baseball to come back with the opportunity to improve as a player.

With the Shockers struggling to get their offense going in 2017, Butler inserted Schwanke into the starting lineup as a designated hitter for the first time on April 5 against Oklahoma State. Since being a regular rotation player, Schwanke has managed to get at least one hit in eight out of the 12 games he’s started.

His two game hits against Southern Illinois and Kansas resulted in two wins for the Shockers. Schwanke hit his first home run as a Shocker on April 22 against Missouri State.

“He’s always hit and he has a good swing. A good swing is going to play,” Butler said. “He has a great strike zone discipline and a very good eye for a strike from a ball. Each game he’s given us good at bats.”

Schwanke has developed a trust with the coaches has given the senior Sport Management major to develop new goals after his playing career is complete. Schwanke said that he wants to become a baseball coach once he completes his final year of eligibility.

The bond that Schwanke developed between Butler and Walker, he said, has been the reason why he wants to follow their path in becoming a teacher of the game.

“Wherever they went (to coach), I was probably going to end up going,” Schwanke said. “Whenever I’m done playing I want get into coaching and I want learn what Coach Butler has done for 27-28 years. Coach Walker is coming into his own as well.

“Being able to learn under their reign and pick up on things is what I want to do, so coming here was an easy decision.”