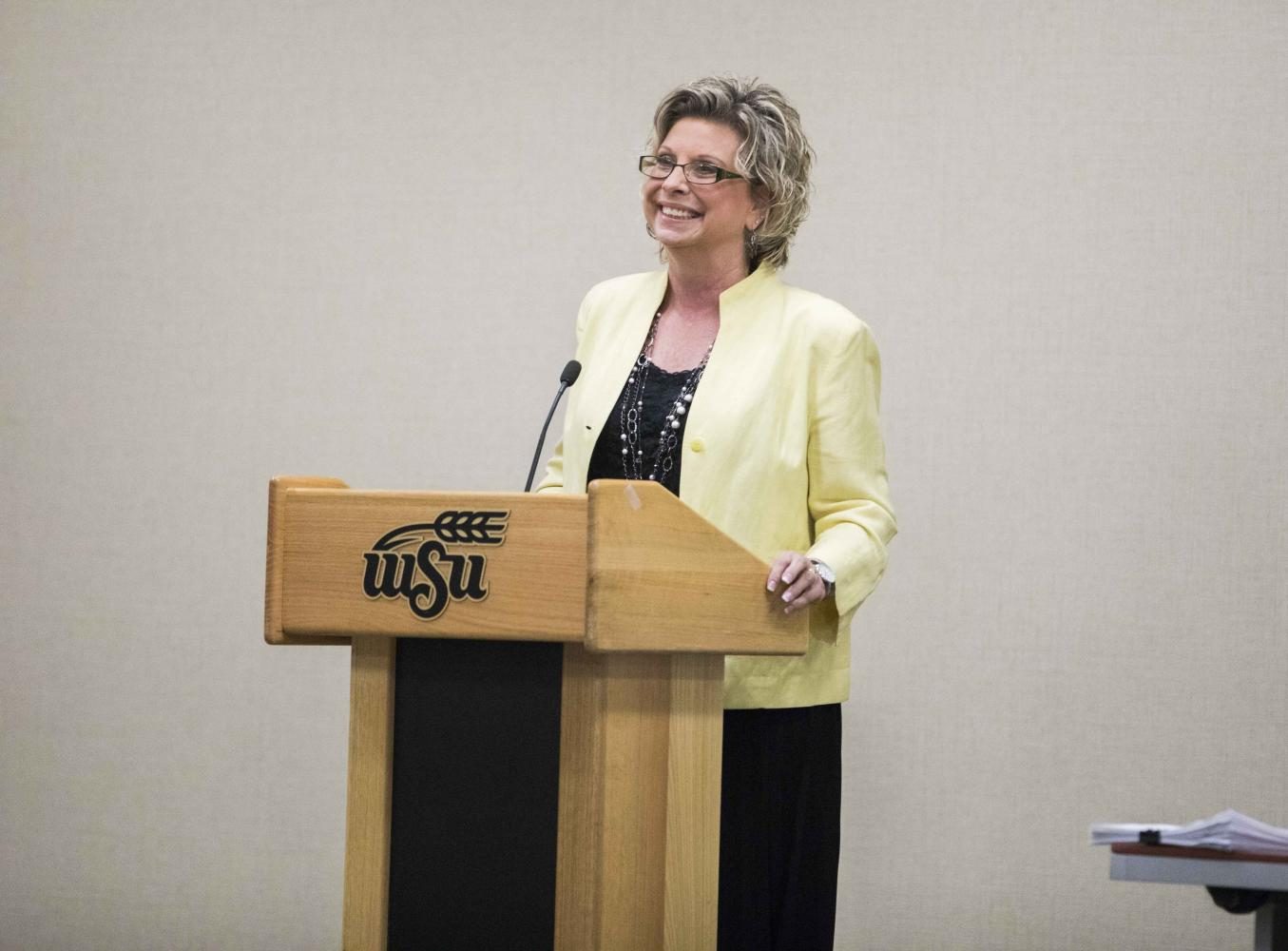 Kathy Bond was confirmed by the Student Government Association to be one of two returning adult senators. Bond plans to graduate in December with her degree in communications.

Kathy Bond, a returning adult student, knew she was interested in the senator position as soon as she heard about it leading up to the start of the 60th Session of SGA.

“I believe that the returning adult is a very unique, diverse group of people because we are attending college for different reasons than what the young adult is.”

Bond first came to Wichita State in 1989 to take a public speaking class. She had a deep love for ballet and when she first stepped foot on campus she wanted to work toward a degree in performing arts.

After her first semester at WSU she met her husband, Gary — they got married and had two sons.

At age 53 she decided to return to the classroom and finish her degree in performing arts.

“I went back to the ballet studio again and I was taking acting classes,” Bond said. “I really thought that was where I wanted to go.”

During a visit to a professor’s office, Bond came to the realization that she had already been everywhere she wanted to go within the performing arts world.

That’s when Bond changed her major to communications.

Bond said she feels that her story of going back to college as a returning adult student allows her to relate to many other people and encourage them in their education endeavors.

Student Body President Paige Hungate said Bond’s mantra stood out to her during the interview for the position.

“The basis of everything she talked about was that it’s never too late,” Hungate said.

Bond and Hungate had worked in the same building this past summer — Bond for the Sedgwick County Republican Party and Hungate as field director for U.S. Senator Jerry Moran’s campaign.

Hungate had encouraged Bond to join SGA at the start of the school year, but Bond said she was too busy at the time to apply for a senator position.

Now that Bond’s schedule has freed up, she was able to apply for the position. She received the nomination and was confirmed by the senate last Wednesday.

Bond plans to graduate with her undergraduate degree in December, but said there’s a lot she’d like to accomplish between now and then.

While some of her initiatives are rooted in fun — such as getting WuShock a girlfriend or creating a separate student section away from the band for returning adult students — Bond also wants to support specific groups of students on campus.

One of these groups, the Student Veterans Organization (SVO), has Bond’s attention. The group recently moved their Veteran Center space to Grace Wilkie Hall.

“You will not find a veteran or an active military person who will ever complain about anything,” Bond said. “But I’m going to tell you, that place needs an overhaul. If the RSC can look nice for the traditional student then that [center] can look nice for the non-traditional student and especially for those who fought for us to even be able to have the freedom to go to school.”

Bond said she is ready to get started and accomplish as much as she can before she graduates.

“I’m excited to serve the university in whatever capacity is needed,” Bond said.

Hungate said the feeling in the room when Bond spoke at the SGA meeting was “light and fun.”

Hungate said she expects Bond to bring joy to the group as well as accountability.

“We need someone who’s always going to be positive and that’s Kathy,” Hungate said.