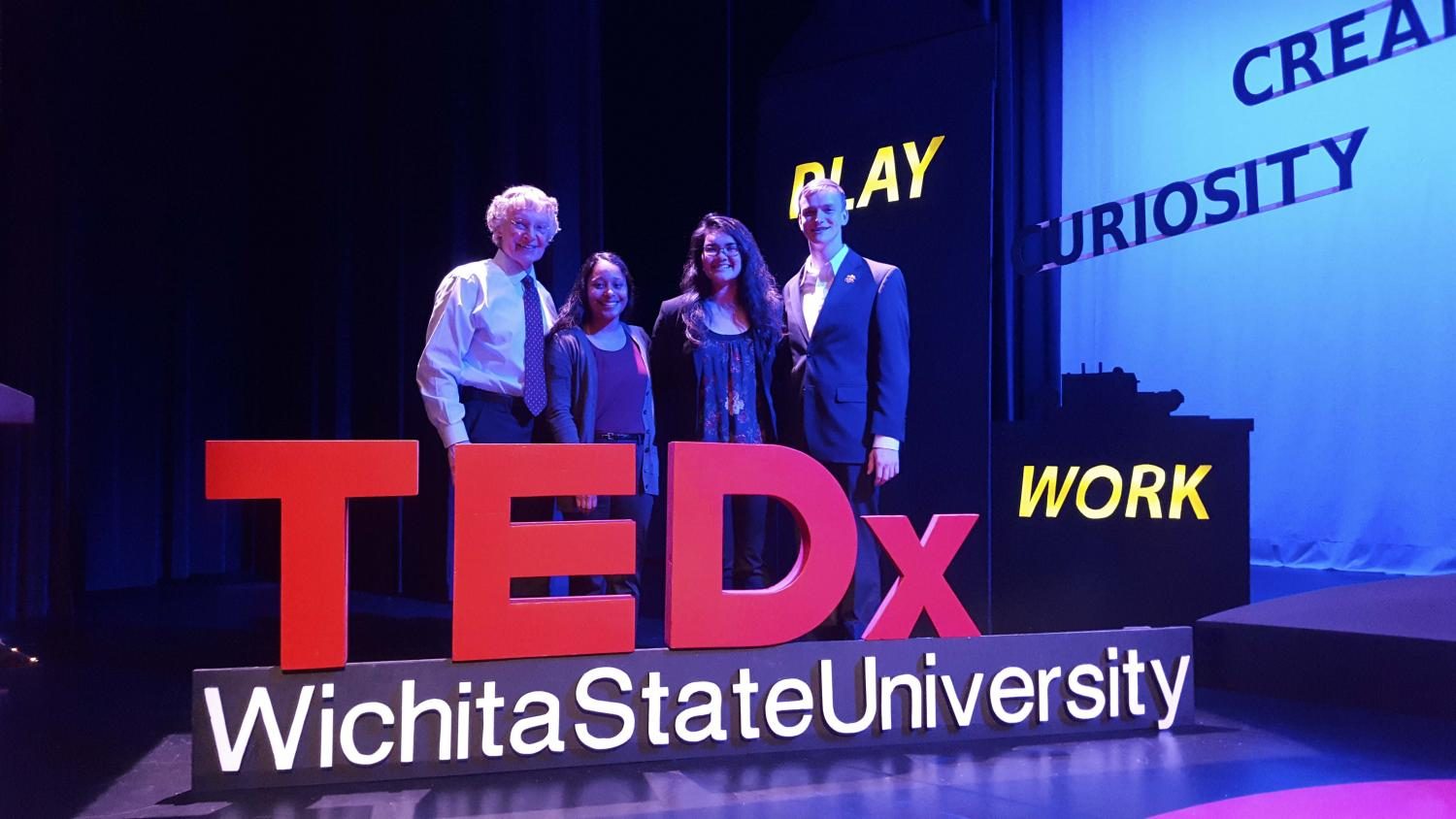 TEDx speakers (from left to right) Dave Dahl, Aja Molinar and Christine Fuston and emcee Sam Belsan. Dahl, Molinar and Fuston presented in the second block of TEDxWichitaStateUniversity on Thursday.

The event included three hour-long blocks of three speakers each. The audience of 100 was invited to engage in a question and answer with the speakers following each block.

TED is a “global community that welcomes people from every discipline and culture who seek a deeper understanding of the world.”

TED is a nonprofit that shares ideas in the form of short talks. TED is an idea-sharing conference that has grown to more than 1,400 TED Talks videos.

TEDx is an independently organized TED event. Puvindren Supramaniam, Wichita State senior, applied for a TEDx license, one of the key efforts behind bringing TEDx to Wichita State. He applied for the license fives times.

The stage was created by Wichita State University stagecraft students under the supervision of Ed Baker, associate professor of theatre. Baker was also one of the nine-featured speakers.

Duggins drew upon her experiences as an intern at the White House and starting a college readiness program for high school girls called the Princess Project in order to encourage the audience to give social capital back to the underprivileged in society.

“We have to be intentional about creating social capital when unjust systems won’t; we can help solve the world’s big problems by sharing our own little gifts.”

“I’ve learned that when we do not see the metaphorical black princesses in our lives, sometimes we just have to become them.”

Aguila talked about the cultural importance of food and the evolution of food across cultures in order to point out the importance of cooking, sitting down and eating at the dinner table with family or friends.

“Somehow food is local and global at the same time.”

“Next time you eat: slow down.

Next time you eat: think about what you’re eating.

Next time you eat: try a different recipe—embrace diversity.

Next time you eat: try to cook.

Next time you eat: think, reflect on what you’re doing and of course, enjoy.”

Replace Fear of the Unknown with Curiosity

Baker told stories about Edison’s invention of the lightbulb, Leonardo da Vinci’s daily activities and the eternal hum which can be heard in outer space to definite curiosity, creativity and connections and illustrate how curiosity helps us overcome our fears.

“We can let fear rule our lives or we can become childlike with curiosity—pushing our boundaries; leaping out of our comfort zones and accepting what life puts before us.”

“If we can be brave… be like children and play… climb to the top of our silos and look out over the  open expanse between our silos—between our practices—and… recognize that space as fertile soil for growth, then we can double the capacity of human growth”

Dahl talked about four of the 22 traits which he thinks make people special. He talked about how special people show appreciation for others, are dreamers and are capable of listening to others. Dahl talked about Gregg Marshall, Ron Baker and his experiences as a family law practitioner.

“There are many defining moments out there for us every day and if you look for th em you will find them. Little things like working extra hard on a project and helping someone else with theirs. Stopping at a koolaid and complimenting the little entrepreneurs and giving them some extra money. Telling your parents that you love them and that you appreciate them. Raising your children to be your heroes. Every day is not going to be a masterpiece, but every day can be meaningful.”

Why We Need Another Coming Out Story

Feeling alone isn’t fun. Fuston described her own journey of coming out as a lesbian to her family and friends, then enlightened the audience to the positive connections she made when she was willing to share her coming out story with a friend and an advisor at Wichita State. She encouraged everyone to do the same.

“Keeping a secret your entire life can eat you alive.”

“We bend our stories to match our peers because in day-to-day chit-chat there is no room to be gay.”

“The only way to break free from our chains of suppression is to break free of our silence and we do this by sharing our stories – by coming out.”

“There can never be enough stories, because every story is different and every story needs to be told.”

Killing One Bird with Three Stones

Molinar recalled the frustration of being interrupted mid-conversation by people responding to a phone call or messing with their phone. She challenged the audience to put cell phones away when eating with others and having personal conversations, citing her undergraduate research on cell phone use.

“Research shows the mere presence of a cell phone can be a distraction.”

“There is an instant gratification associated with your cell phone.”

“I’m not saying the entire campus should be turned into a cell phone free zone, because people would… freak out. But it would be a good idea to have a place on campus where students could go and know they won’t be interrupted by a cell phone.”

“The next time you think about picking up your phone in the middle of a conversation remember that it’s the small moments, like when somebody is telling you about their day, that create connections.”

Block 3
You Can… That is My Story

Umeri told the story of how she was able to get a college education while growing up in Africa, despite her family being very poor, and how she ended up at Wichita State University after working with non-profits in Africa for 15 years.

“I went through school with a heart and a dream that one day i would become somebody and be able to change the situation in my home.”

“We can begin to change the world from our little space… one person at a time.”

Create a Safer World for Transportation

Jibo He (assistant professor in psychology department, guest professor at Peking University, incubator partner at iBeeHub in New York, has eight patents, received over $1 million in funding, and published over 30 peer-reviewed journal articles)

Jibo He presented his research on driverless cars. He explained the ethics and problems with creating a driverless car, drawing from examples of the Google car.

Definition of a driverless car:

“A robotic vehicle that is designed to travel between destinations by integrating human factors and technology.”

“To err is machine too.”

The Habit of Making Value

Doug Melton (Program Director for Kern Family Foundation, engineering alumnus of WSU, was a professor of Electrical Engineering for 17 years at Kettering University)

Thumbs up or down? Melton tested the audience’s understanding of the relationship between value and design with pictures of inventions and asked them to make a snap judgement with a thumbs up or down. Whatever field someone is in, Melton said it is important to find value in what you are doing.

“The most prolific change agents in the modern world are those who can think deeply about the relationship between value and design.”

“Forget about [your major], what do you want to do that creates value for other people?”