From afflicted to accepted: A senior’s story 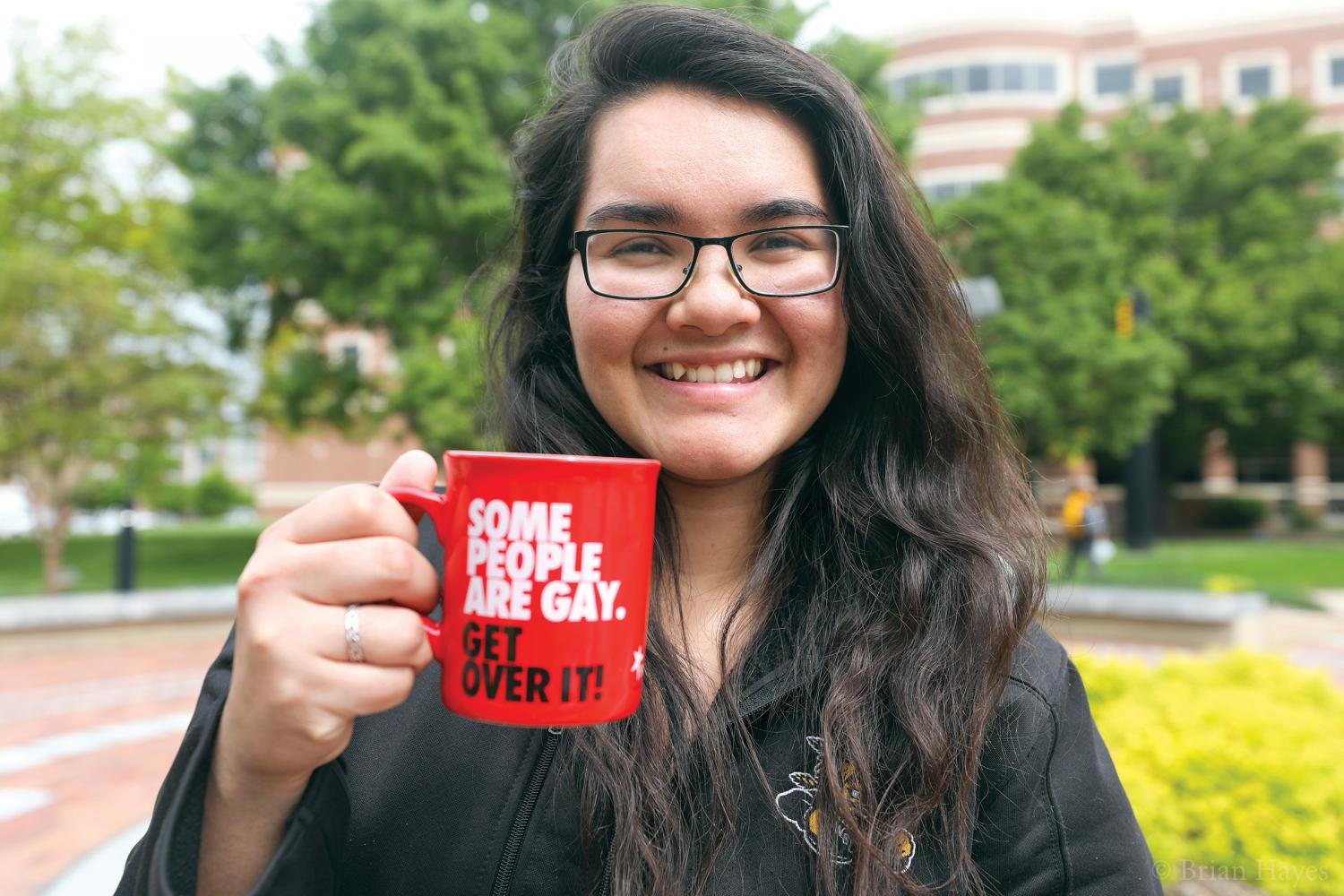 Christine Fuston poses with her favorite mug. Fuston recently spoke at TEDxWichitaStateUniversity about coming out as a lesbian.

Six years ago, senior Christine Fuston said she began struggling with cutting herself due to an unfortunate chain of events that began when her mom found an open letter Fuston mistakenly left on the bathroom counter from her secret girlfriend.

“My mom forced me to read (the letter) aloud in the quiet of our house,” she said in her TEDx speech, presented at Wichita State. “She realized after I was not the daughter she wanted.”

Now, Fuston is no longer hiding her sexual orientation. Instead of accidentally coming out to her mom, she purposefully gave a TEDx talk last Thursday about her life as a lesbian. Her goal was to encourage people who don’t identify as heterosexual to share their stories.

“I admire Christine for having the courage to put herself out there like that and I believe that by [giving her speech] she is helping to create that future where a coming out story will just be another story,” said Ashley Cervantes, Christine’s adviser in the McNair Scholars program.

Graduation is coming in May for Fuston, and she said she is looking forward to doing graduate work at Oklahoma State University in the counseling psychology doctoral program. She has been accepted and will begin working towards her graduate degree in fall 2017.

“I’ll get to work with LGBTQ issues,” she said. “I’ve never felt so accepted before and welcomed and I just got a good vibe from all the professors and current graduate students (at Oklahoma State).”

Fuston has a passion for LGBTQ issues. In her speech she said, nine out of ten LGBTQ teens report being bullied because of their sexual orientation; they are twice as likely not to finish high school and are two to three times as likely to commit suicide compared to their heterosexual peers.

“I think Christine is super talented, but I definitely know she’s on her way to becoming an even more talented psychologist and social justice activist,” said junior Aja Molinar, a close friend of Fuston.

Her passion to assist others with LGBTQ issues through counseling didn’t come all at once. It was molded over time and came as a response to her own struggles with her sexual identity.

“I came in and I was undecided about anything and everything,” she said. “I changed my major about three times.”

She decided she wanted to join the United States Army Reserve, something she had been already thinking about, so she joined the rowing team in order to prepare for the reserves by losing weight and getting in shape.

Fuston postponed her education. Training for the reserves, which consisted of basic and job training, lasted six months.

“I expected everyone to be this alpha warrior type,” Fuston said.

She was wrong. She said there were people of all types and backgrounds. The worst part was being around people who complained a lot, she said.

While in training, Fuston realized she wanted to major in psychology when she grew angry during suicide awareness and prevention classes.

“They never talked about the things that people go through before they become suicidal,” she said. “It’s just as important to be there for someone even before they’re thinking of killing themselves.”

A future after college

In March 2016, Molinar, Fuston’s TEDx speech rehearsal partner, encouraged Fuston to join the McNair Scholars Program with her, a program which helps increase the number of students from disadvantaged backgrounds enter and complete Ph.D. programs.

“Christine exemplifies this mission,” Cervantes said. “I have no doubt she will achieve her educational goals and do great things in her profession.”

The McNair program sparked an interest for further schooling, Fuston said, and she knew she wanted to do graduate work in counseling.

Without the help of the McNair program, Fuston said she would have had to work two extra years to become accepted in a graduate program in psychology.

The topic of Fuston’s TEDx speech was born after Fuston came out to sophomore Makenzie Hercules, team manager of the rowing team.

“The weight of the world came off my shoulders when I realized I had an ally,” Fuston said in her speech.

“She let me know that I was not alone, because she also identified as lesbian and had a wife and a baby,” Fuston said. “All the things I had been shamed for wanting in our society, she made them seem normal and okay.”

Eventually, Fuston realized her real interests lay with counseling and LGBTQ issues, so she quit the rowing team and joined Greg Meissen, professor of psychology, to research attitudes towards LGBTQ athletes, where she interviewed students one-on-one.

Fuston said she hopes to one day help others in the same way Cervantes and Meladee Garst, counseling center psychologist, have helped her.

“Diversity cultivates growth. Being around a lot of students from all different backgrounds, countries and majors has helped me grow a lot,” Fuston said.