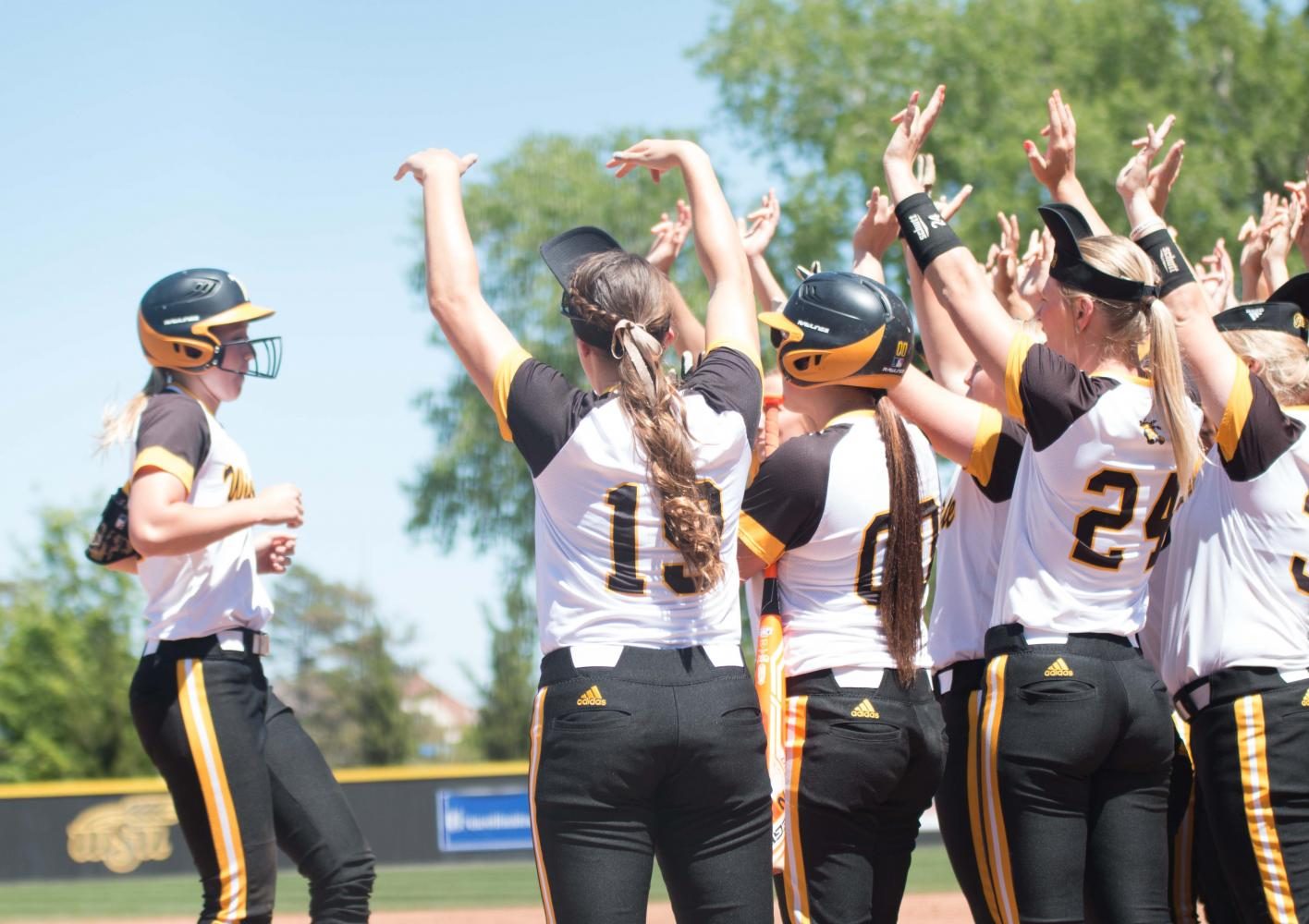 Members of the Shocker softball team greet sophomore Laurie Derrico after a home run against Evansville.

Smiles and tears ran down the faces of the Wichita State softball seniors as they came off the field in the top of the seventh inning.

In the final regular season game of the season and the last home game as members of the Missouri Valley Conference, the Shockers made one of their final memories for one of the most decorated senior classes in program history.

As all the seniors on the field walked towards the dugout, they were greeted by every underclassman, with a standing ovation and a thunderous roar from the 498 people in attendance at Wilkins Stadium. When freshman Bailey Klitzke struck out Evansville’s final batter to cap off a 5-0 win, the moment already sunk in for the seven seniors that it was the end of a remarkable journey.

“I don’t think it really hit me until that last out, when (head) coach (Kristi Bredbenner) took all the seniors out. That’s when I started crying,” senior Katie Malone said. “We were all just wanting to play for each other and make it one last good game here.”

Although the seniors will not be play a game in the American Athletic Conference, the class of 2017 left their mark on the MVC.

Six of the seven seniors being apart of two MVC regular championships and an MVC Tournament championship in 2016. They also contributed to a unique milestone in program history, helping win WSU”s first NCAA Tournament game in softball against Tulsa.

“We needed to change the culture and they were a big part of that change,” Bredbenner said. “They wanted to be the difference makers and they accepted that challenge. Each and every one of them worked hard day in and day out to accomplish something and leave their own legacy here. They’ve done a tremendous job of that.”

Needing only one more win to break Patty Bautista’s 1989 record for most wins in a season, Bredbenner called on Malone in the top of the third inning. Malone was told before the game that senior Jenni Brooks would start the game and pitch the first two innings and would come in the third inning so she could obtain her record in front of the home fans.

Malone pitched 3.2 innings, not allowing a single Evansville hit and striking out two Purple Aces batters to earn her 25th win of the season and break the 28-year-old single season school record.

“(The record) shows all my hard work and everything that I’ve been through,” Malone said. “Last year, how I struggled and I came out this year and knew exactly what I wanted to do. That’s just one step closer to where I want to be.”

Normally used as a pinch runner, Bredbenner inserted senior Kennedy Long into the starting lineup. Making her first start of the season, Long made the memory last.

Long hit a sacrifice groundout to second base in her first at-bat of the game that scored Macklin Hitz from third to obtain her first RBI of the season. Long said that getting that RBI in her final home game was a moment she was going to cherish.

“(The RBI) was a good memory and I’m glad I could contribute to the team on senior day,” Long said. “It’s always fun to get an RBI.”