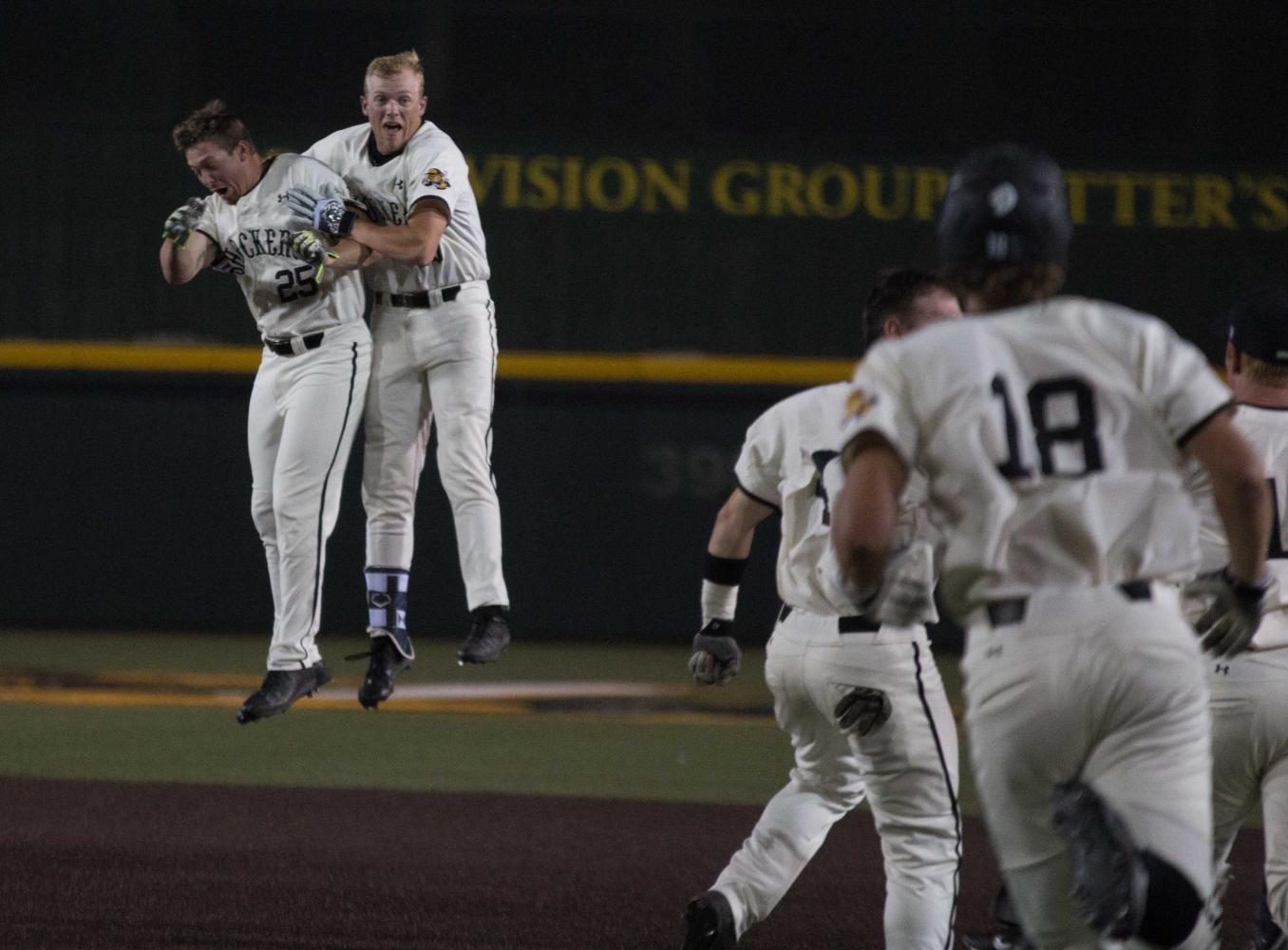 In the last inning’s of play, Wichita State’s bats came in the clutch against a 33-win Oral Roberts team. Willie Schwanke blasted a triple in right field to send in Alec Bohm in the bottom of the ninth, sending the game into extra innings.

It was sophomore Greyson Jenista, however, that highlighted Tuesday night at Eck Stadium.

On his first given pitch, Jenista lined the Oral Roberts dagger into centerfield to score Jordan Boyer from second base and give WSU (23-25) a 7-6 victory.

Head coach Todd Butler was pleased with the Shockers’ grit and tenacity in fighting back whenever Oral Roberts forced them into a tough situation.

“Tonight, they won the game, and they did it themselves,” Butler said. “It was an entertaining game, and it was a good win for our guys.”

Sophomore Dayton Dugas scored the first run for Wichita State courtesy of an RBI single from Jenista in the first inning.

The Golden Eagles answered with runs in three consecutive innings.

In the top of the second, Michael Hungate doubled down the right field line to bring home Brent Williams.

In the top of the third, it was Noah Cummings who provided the offense. He singled through the left side, scoring Cal Hernandez.

Sam Grellner took advantage of the steady breeze blowing out to left field in the fourth inning. He launched a 2-0 offering from sophomore Connor Lungwitz into the sky and let the wind take over. The two-run blast put Oral Roberts up 4-1 over WSU.

Freshman Preston Snavely took over pitching duties in the fifth inning for the Shockers, retiring the Golden Eagles in order.

Young cut into the Oral Roberts lead with one swing of the bat in the sixth inning. A two-run shot that barely cleared the left-field wall trimmed the Shocker deficit to one.

Junior Chandler Sanburn came in to pitch the sixth and seventh innings. His performance, according to Butler, was critical for the Shockers.

“Those guys coming in and pitching two innings did a great job tonight,” Butler said. “We have enough guys to close this thing out the right way.”

Young continued to carry WSU’s offense with his second two-run blast of the night, a no-doubter that was nearly identical to the first.

“I’ve got no words for it,” Young said with a smile about his career night. “He threw me a slider and he left it up.”

With the score tied, WSU turned to junior Ben Hecht to keep it knotted at five.

Grellner, however, had other ideas.

He crushed a 2-1 pitch from Hecht over 21st street beyond the left field fence, giving the Golden Eagles a 6-5 lead.

WSU did not take kindly to Grellner’s blast.

The Shockers play in their final Missouri Valley Conference home series of the season this weekend against the University of Evansville. Game one is scheduled for Friday, May 12 at 6 p.m.