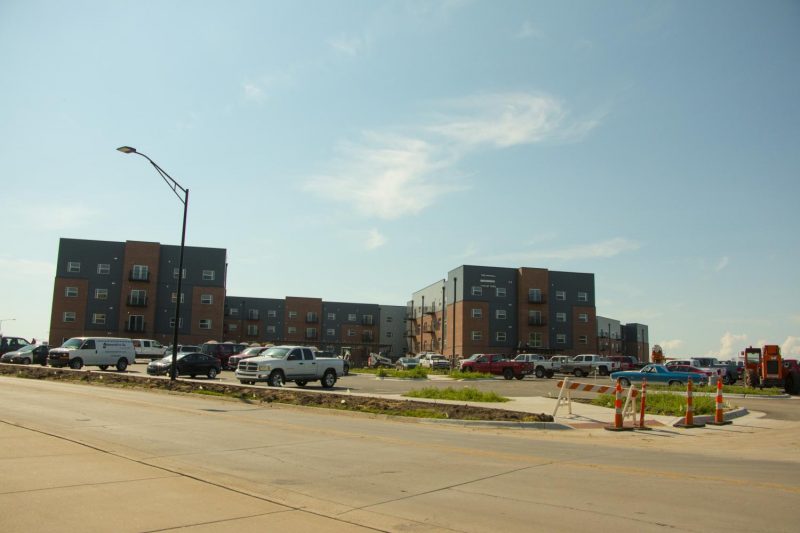 Construction continues at The Flats, set to open in the fall. July 14, the university announced it was moving 300 students from university-owned Fairmount Towers to privately owned The Flats.

The Kansas Board of Regents gave Wichita State the go-ahead to pay $1 million to a company partially owned by the chair of the board, but did not provide a copy of the full text of the agreement.

As part of a lease agreement between Wichita State and MWCB, the university will move more than 300 students from university-owned Fairmount Towers to The Flats, a new private apartment complex on Innovation Campus that was struggling to attract students.

July 20, Wichita State President John Bardo sent Nelda Henning, director of facilities for the board of regents, a request for approval of a lease with The Flats. That’s six days after the university announced the move.

That proposal was provided to The Sunflower and The Wichita Eagle.

But the approved agreement was different from the one proposed July 20.

Six days later, Wichita State submitted a different proposal to the board of regents, according to the letter of approval by the board’s president, Blake Flanders. His letter includes several revisions to the original proposal, but not the full terms of the agreement.

The Kansas Board of Regents denied The Sunflower’s request to obtain the full text of the agreement Tuesday.

“We believe it best for you to obtain the signed version,” Renee Burlingham, who handles records requests for the board of regents, said Tuesday in an email response to a record request.

Burlingham said the “final” version of the lease agreement is considered a draft until it is fully executed and signed by all parties, and therefore not subject to open records law.

Burlingham cited an exemption in the Kansas Open Records Act that allows public agencies, which the Kansas Board of Regents is, to deny records requests:

“Notes, preliminary drafts, research data in the process of analysis, unfunded grant proposals, memoranda, recommendations or other records in which opinions are expressed or policies or actions are proposed, except that this exemption shall not apply when such records are publicly cited or identified in an open meeting or in an agenda of an open meeting.”

Burlingham recommended getting the executed version of the agreement from Wichita State.

Burlingham’s counterpart at Wichita State, General Counsel David Moses, would not provide the unexecuted version of the agreement to The Sunflower Wednesday.

“Please see the KBOR response you received when you made the same request of KBOR,” Moses said.

Approval of the lease, which was required by regent policy before the university could proceed, came 17 days after Wichita State announced the move.

The Flats building is owned by MWCB, LLC. David Murfin, the chairman of the board of regents and one of the state’s most prominent businessmen, owns 25 percent of that company. Murfin’s company has been awarded contracts on Innovation Campus for The Flats, the Airbus Americas Building, a partnership building set to begin construction this summer, and a city-county law enforcement training center.

In February, Wichita State announced rates for The Flats. Rent prices as high as $939 a month and a combined cost of $1,000 for an application fee and deposit led to a swift student outcry. In May, the university announced new, slightly lower prices at The Flats, nine and 12-month lease options, a deposit reduced from $900 to $200, all-inclusive utilities, and offered the first 100 residents free reserved underground parking.

After two months of new rates, university management of occupancy at The Flats, and what Vice President of Research John Tomblin called an “advertising blitz,” which included $37,700 in marketing by the university, 48 students had signed up to live in The Flats. That is less than 20 percent of the 280 available beds.

Wichita State officials said after The Flats failed to fill to capacity, Murfin’s company was considering seeking an outside property manager to fill the rooms at The Flats, but decided, ultimately, that it wanted Wichita State Housing and Residence Life to manage the property.

Students who were moved from Fairmount Towers to The Flats will pay what they would have paid to stay in Fairmount Towers and will not be charged for the transfer, according to Flanders’s letter of approval.

The day the move was announced, Wichita State released an online FAQ page explaining the move. One of the questions was “Why wasn’t this announced sooner?” to which the university answered, “The decision was announced as soon as the details were finalized.”

The details were not finalized until Monday and — because the board of regents and Wichita State have denied The Sunflower’s requests for the full version of the unexecuted agreement — are not available to the public at this time.

A full version of the regents’ approval letter can be found here.