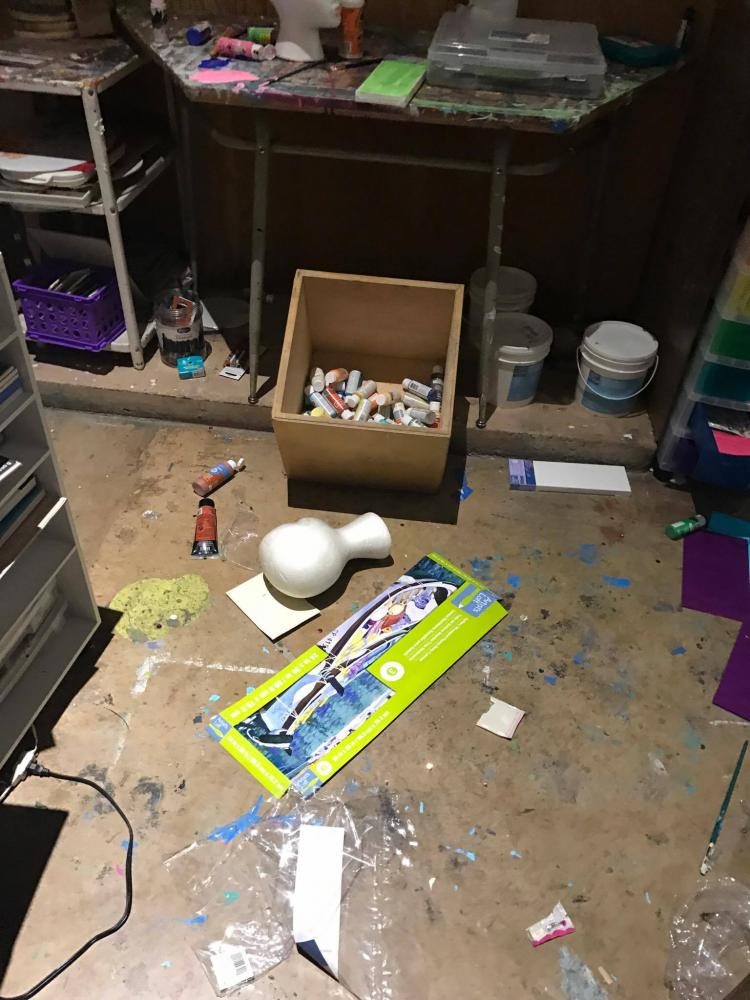 She got a call Thursday evening when she was off campus.

“Did you see what happened?” the voice on the other end of the phone said.

Sudbrink immediately headed to her studio to see the damage. What she found “looked like a warzone,” she said. 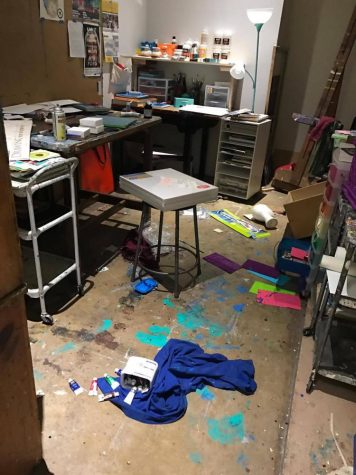 Sudbrink’s studio space — along with at least 4 other students’ — was “completely trashed” she said. Back at her studio she found thousands of dollars worth of art supplies were stolen, damaged, or squeezed out on the floor — including five completed original works.

Sketchbooks were torn, large canvasses were missing or slashed down the middle, watercolor brushes were dipped in glue. A large roll of watercolor paper was destroyed.

“They must have been in there for a long time to do that much damage,” Sudbrink said.

Her studio space, which is on the second floor and she has been using this summer, is locked. A classroom that connects to the shared studio space through a drying rack must have been left unlocked, and the vandals must have squeezed through the drying racks to get to the studio, Sudbrink said.

According to Sudbrink, not only did the vandals destroy her things, but they also took the time to create paintings of their own. The names “Deena + Neeta” are painted over one canvas. Emojis are painted elsewhere. At least one canvas has a shoeprint.

“You can tell they had fun doing it,” Sudbrink said.

According to a Wichita State police report, the incident, which is being investigated as a burglary and vandalism case, could have occurred as early as Monday night.

Sudbrink said the custodial staff in McKnight Art Center “chased off” four teenaged girls, some in swimsuits, from the building earlier in the week. She said the teens ran off in the direction of President John Bardo’s house, which is on the corner of 17th Street and Hillside.

So many things were missing from Sudbrink’s studio, she said, that even if it were four people committing the crime, the theft would have taken multiple trips.

She said she searched all over campus and the surrounding neighborhood, checking for any sign of her missing art supplies.

She didn’t find a trace, she said.

Sudbrink said she hopes the university can help, through insurance, recover the costs of her stolen and damaged property, but that some of the items are priceless. 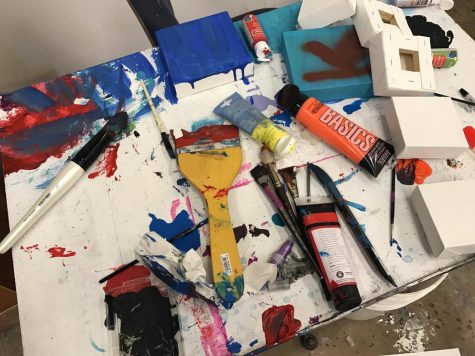 Sudbrink already has one degree in painting. She’s now enrolled to get a second degree in education so she can be an art teacher.

“I work with kids. I help teach kids right and wrong and to respect each other, but also that there are consequences for your actions,” Sudbrink said.

“I know I’m supposed to be the bigger person, but if they can do that to an art studio, what path are they going down?” Sudbrink said.

Sudbrink said she would like for McKnight to have better security, while continuing to give artists access to studio space, which she said is “a rare thing in Wichita.”

“It wouldn’t be fair to them if we just locked it up,” Sudbrink said. “Especially since we pay thousands and thousands of dollars in tuition and fees and the space is supposed to be safe and secure.”

Sudbrink said she would like to continue to use the studio space but that it will be hard to feel comfortable leaving her things in there for now.

“Disrespected is the way I would describe it,” Sudbrink said about finding her studio in such bad shape. “I can’t count how many hours I’ve been in there — working, studying, doing homework — and I feel like that’s been violated.”

A GoFundMe fundraiser has been created to help Sudbrink replace her destroyed art supplies. To donate, visit www.gofundme.com/melindas-art-supplies.