You like that?! Sunflower editors give their picks for the 2017 season 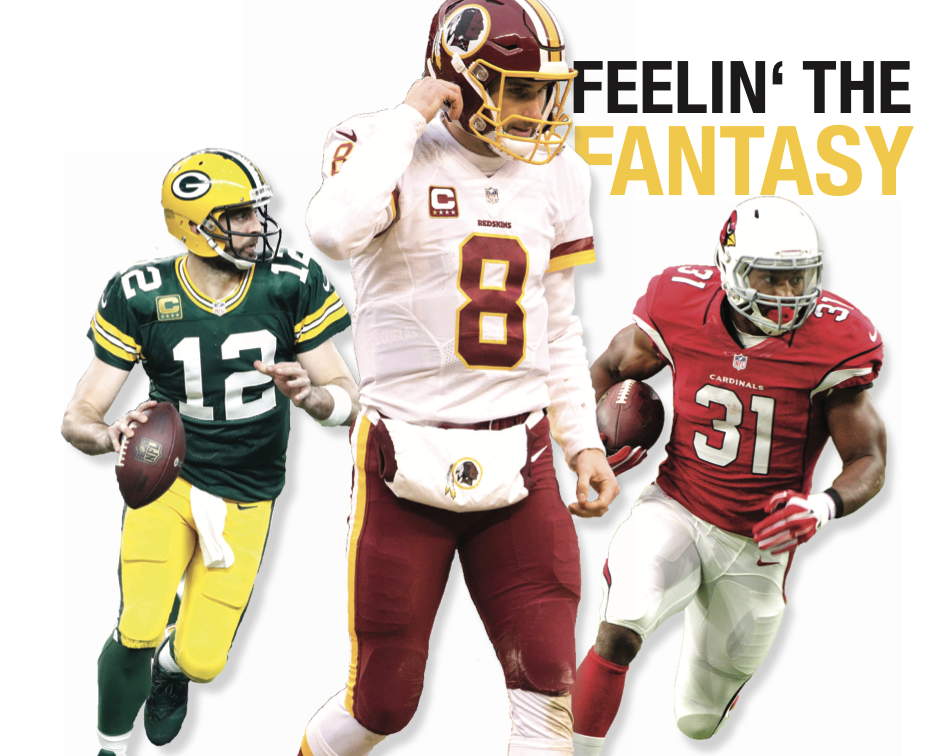 And with the 56th pick in the 2017, Sunflower Fantasy Football draft, Lambeau Leap selects Kirk Cousins, quarterback for the Washington Redskins.

NFL football kicks off Thursday when the Kansas City Chiefs face off against the reigning Super Bowl Champion New England Patriots in Foxborough. Football season means fantasy football — The Sunflower has invited staffers to compete with one another for bragging rights.

At the helm for my team, Lambeau Leap, I have Kirk Cousins airing out deep passes.
Cap’n Kirk isn’t the legend Tom Brady is. He’s not the same MVP Aaron Rodgers is. But in fantasy football, he ranks right at the top, and in the eighth round, he’s an absolute steal.

This year, I’m not fooling around. I’m taking chances and I’m sticking with players who have proven their skills for years on end.

As the second pick in the draft, it’s hard to pass on Le’Veon Bell. In short-yard situations, there’s nobody better. In the second round, I took a risk with Ezekiel Elliott, the reckless second-year Dallas running back.
The NFL and commissioner Roger Goodell aren’t anywhere close to closing the case on Elliott’s six-game suspension, so his playing time may be in question. He’s already eligible for play in this week’s game, and I expect the suspension to be pushed back even more as the court requests more time to evaluate the evidence in Elliott’s case, which questions whether or not he is in violation of the NFL’s personal conduct policy amidst accusations of domestic violence. If the court adds more time to the case, Elliott’s suspension will further be pushed back, or even possibly lifted.

The gamble on Elliott might have already paid off.
In past years, wideouts have been key, but don’t pass up top-tier running backs in the early rounds. Wideouts like Tyreek Hill should stay available in later rounds, so don’t be afraid to wait this one out.

If you’re in search of advice for this season of fantasy football, try this: pick winners. Don’t reach for Todd Gurley, who may be one of the best running backs in the league on one of the worst teams in football. Stay away from teams that are going to take a beating.

Sure, Isaiah Crowell can split through defenses, but the Browns will likely spend the majority of their games trailing by more than 10 points. I’m steering clear of teams like the 49ers, Jets, Jaguars, Colts, Bears, and others that are in line to finish at the bottom of their division. You should do the same.

This was supposed to be the first year since 2011 that I wasn’t going to play fantasy football. I was going to be able to watch my team, the Baltimore Ravens, and not root for an opposing receiver to rack up yards without leading their team to victory.

Oh, it felt great. No last minute adds off the waiver to save my lineup from being just destroyed. No more reading articles telling me who to sit, start or drop.

“Do you wanna join my fantasy football league?”

I wasn’t actively seeking out a league to join. I had resigned myself to the idea of just being a fan. But, being competitive I wasn’t going to say no when asked.

With my enthusiasm for the game at a new low, I did no research as to who is hot and poised to have a stellar year. I didn’t give a damn about sleepers or great gets in the later rounds.

I lucked out and got the first overall pick of the draft, choosing David Johnson. I opted out of Le’veon Bell and Antonio Brown because I didn’t want to feel so conflicted when they undoubtedly obliterate my beloved Ravens twice a season.

I continued to pick the highest ranked players for each position I needed to fill. I tended to lean towards players I had at least seen on the field.

Towards the later rounds, after I had filled my lineup and got a couple skill positions on my bench, it became a mad dash to grab the shiniest turd left in the pile.

Will I do good this season? Who cares. I hope I win just so I can talk crap to my friends.

Picking seventh overall in a fantasy draft is a little lower than I’m used to — all the big names like David Johnson or Antonio Brown are off the board.

I took quarterback Jay Ajayi from the Miami Dolphins, who finished the season strong last year with Ryan Tannehill out for the season. He should get more snaps than a fresh-out-of-retirement Jay Cutler.

In the second round, I took Jordy Nelson. Dez Bryant was still on the board — no offence to Dak Prescott, but Aaron Rodger passing game gives you a higher upside.

By the third round, Rob Gronkowski still hadn’t been picked. For the record, there are only two tight ends worth taking in the first eight rounds — Gronk and Travis Kelce. I’ve seen both go in the first and second rounds in previous drafts. Third is a steal.

For my fourth pick, I took the top quarterback in the league, Aaron Rodgers. I wouldn’t normally take a quarterback high, but if Rodgers or Brady are available, they’re hard to pass up. I think it’s worth picking one of them over a mediocre running back or wide receiver — especially in a league that rewards quarterbacks for extra passing.

My later picks were a mix of running back and wide receivers — Keenan Allen back from a season ending injury and Marshawn Lynch out of retirement to play for his home town-team. Both players are worth the roster space in case they return to their former selves.

In the end, I might have spread myself a little thin, but I prefer not to put all my eggs in one basket.