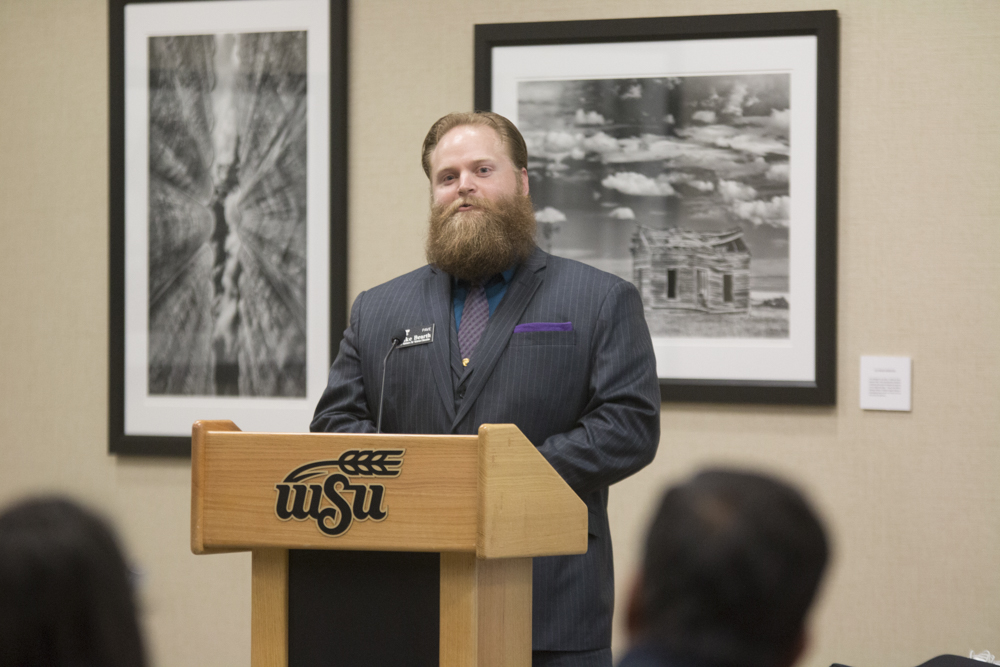 Michael Bearth speaks at the SGA meeting Wednesday evening. Bearth is assuming the position of Veteran Senator for SGA.

Hosman was voted down 18-9 and Corrieri abruptly left the meeting.

Student Body Vice President Breck Towner, who filled in for Hungate Wednesday while she was attending the Kansas Board of Regents meeting, said Corrieri officially resigned about a week and a half ago.

Towner did not disclose Corrieri’s reasons for leaving behind SGA, and Corrieri did not respond to requests for comment.

His replacement, Bearth, is a Marine who said he drew inspiration to join SGA from his grandfather, who became mayor of Oakfield Park, Minnesota despite being in his mid-eighties.

“The time came when he believed that none of the candidates up there could set apart their personal ideologies or values to do the job the way it needed to be done, and so, since he knew what it took, he was going to be that person for the people.”

Likewise, Bearth said he knows what it takes to serve his veteran student constituents.

“It’s all about paying it forward,” Bearth said. “I’m looking for someone who can do it. I don’t see it. I will be it.”

“I think he’ll bring strong leadership from his military experience,” Egerton said. “He’ll be able to provide structured dialogue between the groups so they can work together well.”

Bearth said one of his missions will be to separate his personal beliefs from his actions as senator.

“I believe that to be one of the key things you need to do,” Bearth said. “Because you’re not just speaking for yourself.”