SGA withdraws proposal for student organization representation in the Senate 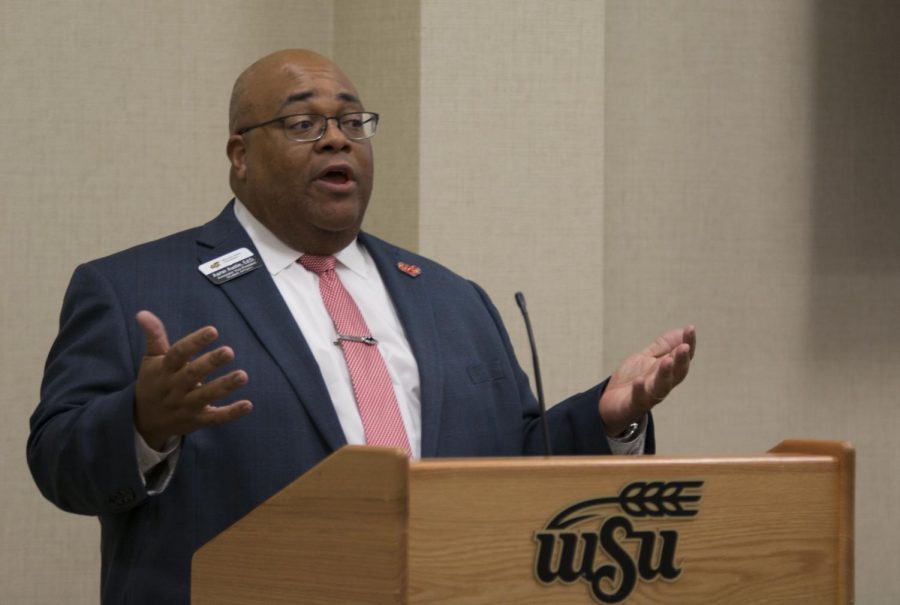 A discussed amendment regarding the addition of senators representing specific student organizations of protected classes was withdrawn from consideration during the Student Government Association meeting on Oct. 25.

The intent behind the proposal was to allow student organizations for protected classes, such as the Black Student Union and the Asian Student Conference, to have a representative voice in the SGA.

Aaron Austin, associate Vice President for Student Life, spoke to the policy conflicts between the proposal and the Wichita State University Legislative Journal that ultimately led to the withdrawal.

The notion of electing senators that specifically belong to certain protected classes is a direct violation of such policy. Austin welcomed SGA’s Supreme Court to review the previous legislation, but as a result of what he believes is a violation of the Legislative Journal, the proposal was withdrawn.

Austin also expressed his support of the intention behind the proposal.

“I do not want any of you to view this as the death-nail for this idea,” Austin said. “There are other ways to achieve the same goals through continued thoughts and ideas. I believe that the intent and the values of the proposed amendment are sound and worthy.”

To further express this support, he presented a list of his own ideas with the hopes of sparking further discussion related to the contents of the proposal.

“One … the addition of a senate position for a member of the multicultural student council following all current election protocols,” Austin suggested.

He continued on with a second idea to, “[encourage] the President of the Student Government Association to consider nomination from the aforementioned groups when said seats are vacant.”

Thirdly, he rationalized a new executive position entitled “Director of Diversity Affairs” which could serve as the chair of the Multicultural Student Council and consult that group when making decisions.

Sophomore Senator Kenon Brinkley pointed to inconsistencies with the application of the non-discriminatory policy.

“You mentioned how the administration and the school cannot support educational programs that discriminate against certain groups. One of those groups was veterans. How are [they] able to have a senator seat in the Senate as is?” Brinkley questioned. “I see maybe an inconsistency with the application there.”

“The issue for me is, if we’re going to look at protected classes, and look at having seats for members of those protected classes, that we limited what those classes were by saying only these specific organizations will be represented,” Austin said. “So, then we have to think about opening the doors wider, or taking a different approach to that.”

Ultimately, Austin summarized his thoughts about the issue by saying, “I think there are ways to get us there, we just haven’t done it yet.”

“It is my most sincere hope that Wichita State University’s Student Government Association can … be an organization that truly represents all of its students.”