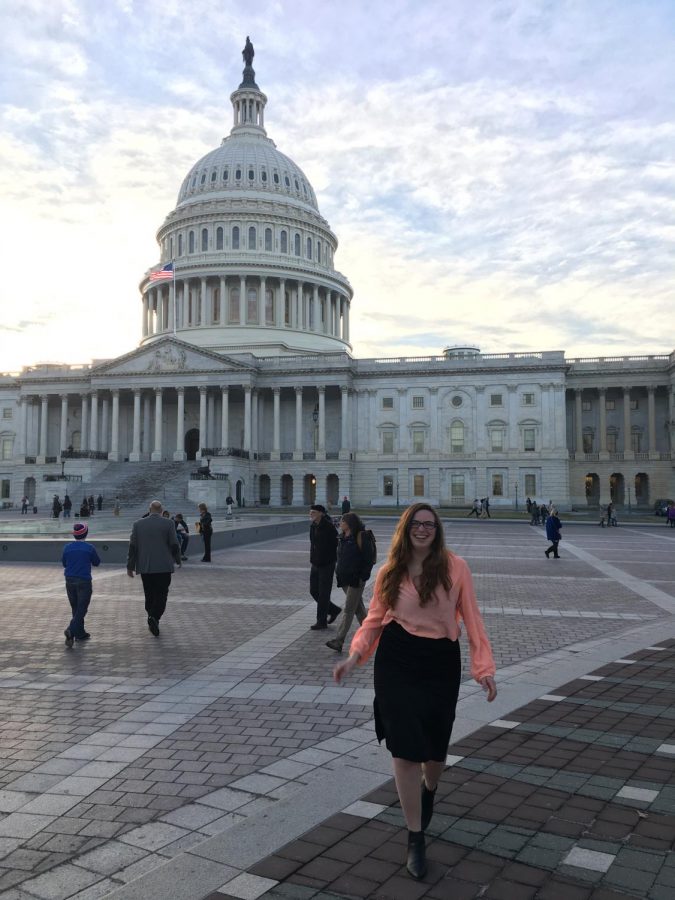 Kylie Cameron stands in front of the Capitol building.

For the Oct. 23 issue of The Sunflower, I wrote a column about sexual harassment and assault. This time, it’s personal.

Last week, reports of Democratic lawmakers sexually harassing young women (and men) began to surface — first from The Hill, then The Kansas City Star, and then The Wichita Eagle. Those women who were being harassed could’ve been me.

I worked for the Kansas Democratic Party as a field intern during the 2016 election cycle. Afterwards, I was accepted into the internship program here at Wichita State and almost accepted an internship at the Kansas State Capitol before I was offered an internship in DC to work for a female senator, who was also sexually harassed when she was an intern in her state’s legislature.

In my senator’s office, we were told, time and time again, if we witnessed or experienced sexual harassment to report it and take action against it. We even had orientation modules on how to report it.

This is how the Kansas legislature should operate when it comes to harassment.

Young women who are given the opportunity of a lifetime shouldn’t have to deal with this. They shouldn’t have to be scared of going into work because someone is going to harass them and make comments that make them uncomfortable. Workplaces aren’t somewhere where you should be hitting on anyone. Period.

Thinking back to when I worked for the party in the 2016 election, I should have known this was going to come out eventually.

When I told my bosses I was potentially going to be interning in the State Capitol, the first thing they told me was congratulations. The next thing they told me was if anyone made comments to me that were inappropriate, I needed to report it immediately and not brush it off. They then told me of several instances of harassment they had heard about or witnessed and then named off legislators who I should avoid.

This past week, my friends told me even more stories of sexual harassment in the Capitol and on campaigns they had experienced. I was told of instances where even men were being sexually harassed. But no one is willing to go on the record about these things due to fear of retaliation by their employers or fear of losing future job opportunities. People shouldn’t have to fear for their jobs for telling the truth.

For a party that’s “progressive” and “pro-women,” we need to do better for our future leaders and actually do something about sexual harassment.