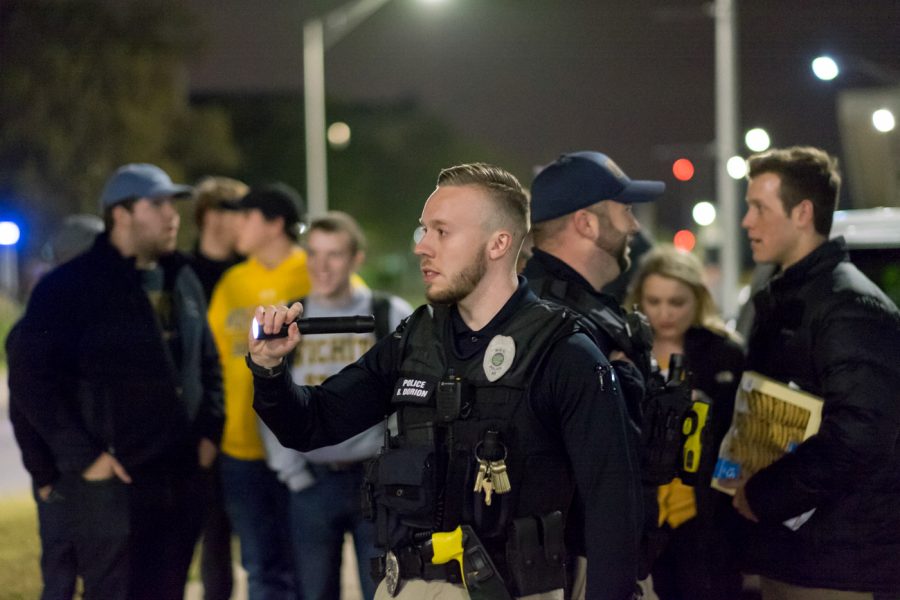 Officer Brandon Dorion points to the dim spot for the participants to be aware of.

The WSU police department said they made an effort to accommodate for the safety of students who attend classes later in the day by adding lighting and increasing the number of emergency boxes on campus. Chad Agnew, a university police officer, said that the safety walk plays a key role in determining what changes should be made.

Agnew also said that the walk served as a learning experience.

“We want to raise the awareness of students,” Agnew said. “Especially at night.”

In past safety walks, university police have done exercises that involved hiding in potentially unsafe spots to test students’ alertness.

“Students should know that they need to keep their head on swivel,” Agnew said.

“There’s a fine line between a beautiful campus and a safe campus,” Agnew said. “You want a happy medium.”

Students contributed ideas to help provide a secure atmosphere on campus in the evening. Ryan Siebuhr, a senior, suggested increased lighting around the Grace Memorial Chapel.

Other areas that raised safety concerns with students include the Eck Stadium parking lot, sidewalks surrounding McKnight, and a strip of sidewalk between the Heskett and Corbin Education Centers.

Mikaela Cutaran, a freshman, was especially concerned with the safety of this area.

Cutaran recalled defensively using pepper-spray on someone in the strip across from Corbin prior to attending Wichita State. “It was in junior high after a club volleyball game on campus,” Cutaran, said.

“I personally attend about 10 or 12 student events per week,” Dorion said. “We don’t want people to see officers on duty and think, ‘What’s wrong?’”

“I want students to see us and say, ‘Hey, that’s Officer Dorian,’ or, ‘Oh, Sergeant Agnew is here,’” Dorion said.