Garner: ‘Lady Bird’ is film-making at its finest 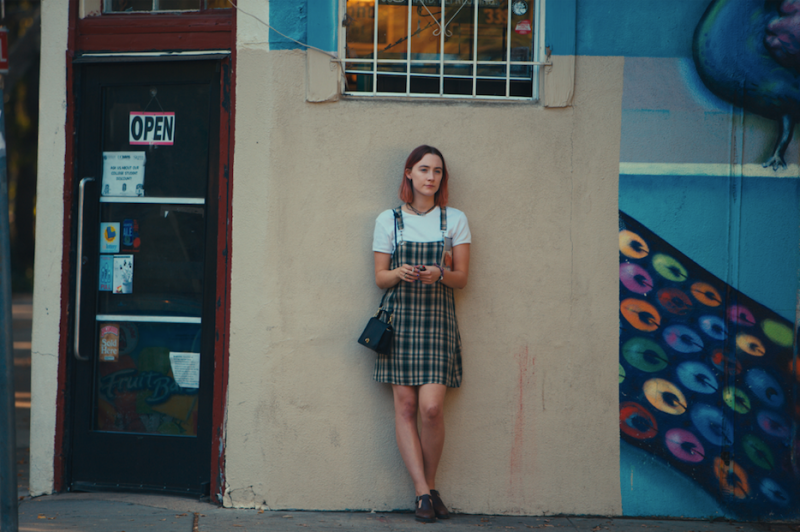 Saoirse Ronan during a scene in "Lady Bird."

Last week, I watched “Lady Bird” on Thanksgiving after a normal day of eating and doing nothing. I saw this movie at a strange time in my life — I’m graduating soon and not completely aware of what I’m going to do, much like the eponymous character in this perfect film. It’s a rare moment when a film can transmute an emotion so authentically and with such genuine pathos it escapes the artifice of the art form itself — when the edges of the screen start to dissolve and disappear and you become less of an observer and more of a participant. “Lady Bird,” the directorial debut from Greta Gerwig, captures the whole of the young-adult experience with so much care, admiration and eminent skill, it’s hard to believe that anyone tried to do it before.

“Lady Bird” follows the senior year of Christine “Lady Bird” McPherson, a high school student embarking upon her final adventure at a Catholic high school in Sacramento. The film traces the unique path she sets for herself over this last year, tracking her as she frets about boys, college and the drama club she participates in.

“Lady Bird” doesn’t necessarily explore new ground within this genre in terms of subject matter — in fact, given a synopsis of the film, you wouldn’t be remiss to wonder if you had seen something like it before. Where “Lady Bird” differentiates itself is in its earnestness, it’s clear and delighted admiration and love it feels for its characters — the universal human emotions put on display so skillfully and with such grace that it seemingly confirms the idea of fiction as an art form itself.

Partially, this is due to the wonderful and naturalistic acting from everyone involved, but especially Saoirse Ronan, who plays the lead character. Dialogue crackles off of her tongue and her face perfectly carries the immense weight of being on the cusp of adulthood. Swirls of rosy acne on her cheeks seem to convey more than just youth, but also an emotional immaturity that she learns to grapple with over the course of the movie. She’s flanked by Lucas Hedges and Timothée Chalamet, two of the boys she falls in and out of love with — both for different reasons. The two young actors are funny and tender in the performances, playing boys not much younger than themselves, with the confusion and shape-shifting idea of identity common to youth.

Her mother is played by Laurie Metcalf, and their relationship forms the emotional crux of the movie. No matter what path Lady Bird takes, she takes it in the shadow of her mother — they exist almost as two elemental forms in conflict with one another but still connected by a maternal bond. It’s a relationship I imagine a lot of young women have with their mothers. These relationships deftly sketch in the film work because the acting in this film is sublime and characterized by a genuine sympathy that many films would have fumbled with, resulting in a saccharine mess, but the level of talent here dodges that pitfall.

All of this is supported by a script and direction that heart-breakingly displays the tumultuous highs and lows of being in high-school; the world crushing weight of a romantic encounter squandered, the awkward approach of the opposite sex in a darkened gymnasium, the idea that your parents don’t really understand you (despite the fact they probably do). All of these ideas are displayed through the gentle lens of the camera, lingering when necessary, pulling away and cutting when not. Gerwig has a natural understanding of the power of the picture that only film can afford — the long take or resting on an image to evoke an emotion. The poignancy she’s able to extract when needed is astonishing.

These elements wonderfully converge into a picture that is defined by its warmth and humanity. Film has the unique property in that it can capture a moment just as a person sees it. Films are, to a certain extent, proof that reality is malleable. “Lady Bird” is the epitome of this idea. Greta Gerwig has taken something so obviously close and dear to her and captured it in a timeless way that can be conveyed to the masses while still being her distinct vision and idea. The care and consideration she places in each frame and for each character is electric.

I wish I could convey to you the feeling of watching this movie unfold in front of you — it’s almost like magic. There’s a scene about three-quarters of the way through the movie where a teacher comments on Lady Bird’s essay about Sacramento. She remarks that Lady Bird clearly loves it, to which Lady Bird responds that she just pays attention. The teacher says “isn’t that love? Paying attention?” The force of these words hits Lady Bird — and the audience — like a sledgehammer. It’s a simple idea, one that seems obvious when stated aloud, but whose deeper truths betray its simplicity. If you find yourself agreeing with that notion, that love and attention are maybe strange bedfellows, then “Lady Bird” is a film you should pay attention to.