Back where it began: Workman on 43 years in museums 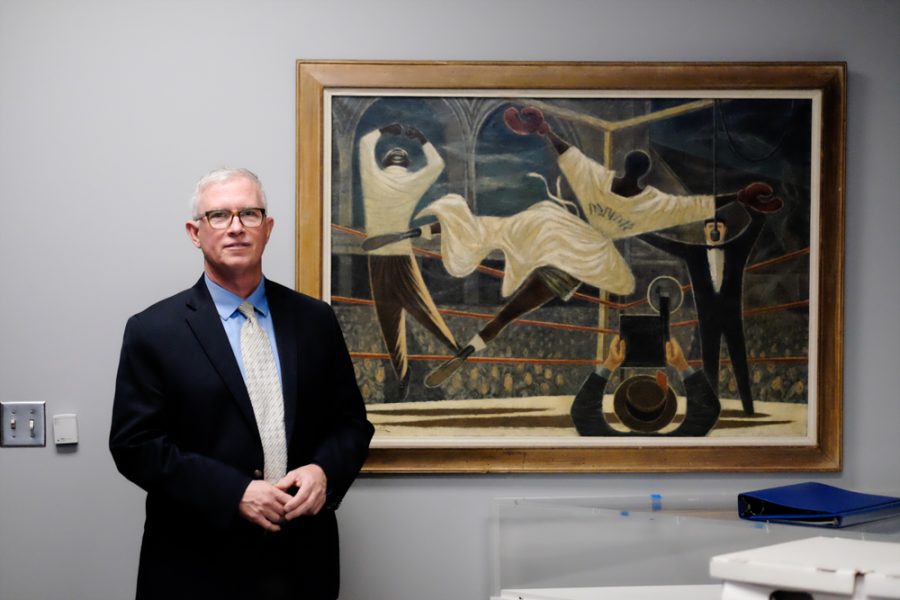 Bob Workman with one of his favorite paintings, Fletcher Martin's "Glory," which hangs in his office.

Unsurprisingly, a painting hangs in Bob Workman’s office in the Ulrich Museum of Art. It is the work of Depression-era painter Fletcher Martin.

The painting depicts a boxer that has just won a match. He leaps across the ring, his boxing gloves raised high in victory. The painting is entitled “Glory.”

“It’s the underdog,” Workman said of the painting. “The boxer, his supporters — the underdogs.”

The painting is entitled “Glory.” Workman, director of the Ulrich Museum of Art at Wichita State, prefers the artwork of this time period.

“I’ve always been interested in artists who have been activists — who’ve used their art to try to move forward a message,” Workman said.

He said that characteristic defined artists of the time and made it one of his favorite eras in art history. He even teaches a class about it, in conjunction with Brittany Lockard, an assistant professor of art history.

Students who take the course, Realism/Activism/American Art, are helping to prepare a show at the Ulrich.

“We the People: American Art of Social Concern,” will show in the Ulrich from Jan. 19 – March 25. Workman said the show will focus on art from the 1950s to 2017 that makes statements about social issues.

Workman called a 35 foot-long, 9-foot-tall Benny Andrews mural the “star of the show.”

The last time the mural was exhibited was in 1977, when Workman was a Wichita State student working at the Ulrich as a gallery guard and helping to set up shows.

“I worked with Benny on the installation of the show, I remember,” Workman said.

Come June, Workman will end his career at the same place he started it. He has announced his plans to retire. He served as director of the Ulrich since 2013.

In the meantime, he has overseen the building of three museums and ran art galleries at Boston University and the Rhode Island School of Design.

One of the projects he’s most proud of from his time at WSU is the move to digitize the Ulrich’s entire art collection. He said digitizing the collection will provide easier access for teaching purposes.

“We encourage faculty to use our collection as part of their teaching, but we don’t give them the tools,” Workman said. “We have to give them access to our collection, or how can they use it?”

But Workman won’t be at WSU to see the fruits of his project. The digitization is slated for completion in early 2019.

“I’d like to be here for it but quite honestly, I’m a little more old-school,” Workman said.

“I think the next director will probably be at least a generation younger than me.”

He said it was a generational issue.

“One of the issues I think we face in this country is that my generation, the baby boomers, are hanging on longer than they did 20 years ago,” Workman said. “I’m pleased with what I’ve been able to accomplish, and I think it’s time for somebody else to have a chance at it.”

He said he looked forward to what the Innovation Campus would like ten years from now, but that he saw some “growing pains.”

“It still doesn’t quite feel like we’re connected (to Innovation Campus),” Workman said. “As more academic programs are held there, I think we’ll feel like it’s a much more integrated part of our campus.

“I think the more that liberal arts students and fine arts students have reasons to be in that area, and we can get more of the engineering students over in this area, it will be better,” Workman said.

“It’s certainly got room for lots of sculpture,” Workman said. “It would be a great opportunity to expand the outdoor sculpture collection.”

Workman said art has a special relevance on a college campus.

“Art is kind of a wellness tool for people,” He said.

“It’s been a real privilege to have a career that surrounds something like that.”