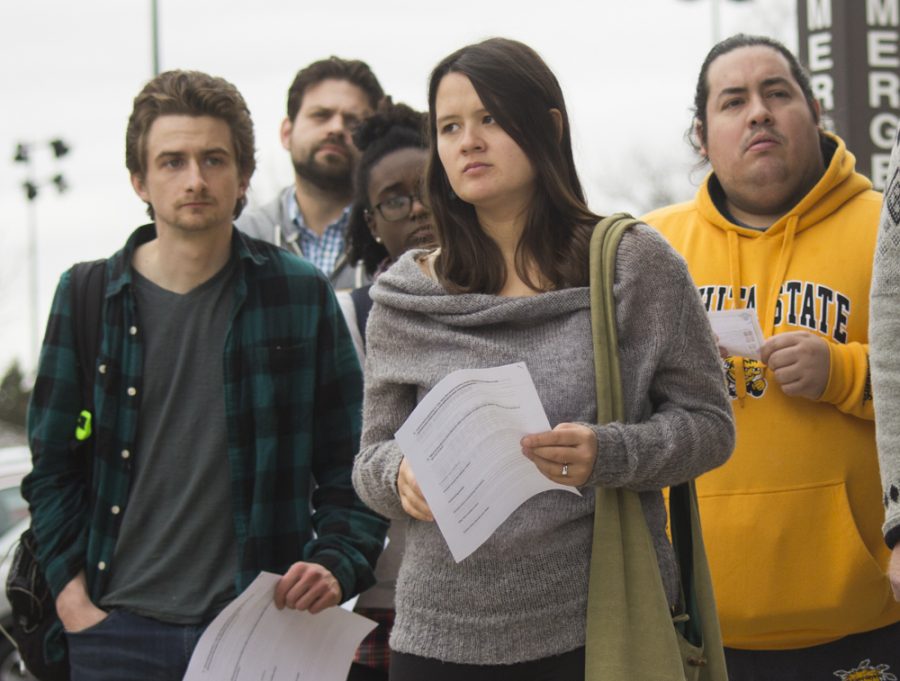 Wichita State students attend a protest about the proposed tax reform outside of the Rhatigan Student Center Wednesday.

The bill, which passed on Nov. 16, would count tuition waivers GTAs receive in exchange for instructing undergraduate courses, towards their taxable income.

The Senate has yet to pass a similar tax bill, but the proposed version does not include the tuition waiver provision. If the Senate bill passes, it will be reconciled with the House bill to eliminate differences.

If implemented, the provision would affect approximately 145,000 graduate students who benefit from such waivers, according to the most recent data available from 2012.

The federal poverty line for a one-person household is $12,060.

Darren DeFrain, writing program director for the English department, said that, factoring in fees, taxes, and social security, WSU’s GTAs receive roughly half of that, and many out-of-state GTAs only make it through college with food stamps.

DeFrain said that, when he was in college, he had to donate plasma to supplement his GTA stipend.

“I took my future wife on one of our first dates to the plasma center so that we would have money for a date later that night,” DeFrain said.

Victoria Stewart, a GTA in the English department, said the tax bill would drastically change her plans for the future.

“I plan on getting my Ph.D at some point, but I’m a first-generation college student, so I don’t have outside funding besides grants and funding from the school, so I would just not go get a Ph.D if the tax bill passes, because I couldn’t afford it,” Stewart said.

DeFrain said taxing tuition waivers could have disastrous implications for not only GTAs, but the university at large.

“This is potentially catastrophic for the future of universities,” DeFrain said. “If we do this to people willing to endure that kind of pay, we will surely, at some point have to lower our standards.”

Shannon Nakai, a GTA in the English department, said the provision could damage undergraduate enrollment.

“If we aren’t able to attend school because of being taxed for a tuition waiver, then we’re losing instructors who have to teach these very necessary classes, which means it’s also going to bring down enrollment for the undergraduates coming in because it’s going to be limited spots for what classes they can take,” Nakai said.

Nakai said she expected more protesters to turn out for the rally, but that she understood why it was a relatively small crowd.

“I was asking some of my colleagues who are GTAs, ‘Are you coming to the rally?’ Nakai said.” ‘I can’t because I have office hours.’ ‘I can’t because I’m meeting with students.’ They weren’t able to come because they’re too busy doing their jobs.”

Speakers encouraged protesters to contact congressional leaders to voice their opposition to the bill. People were on hand to register voters.

James Thompson, a candidate for the U.S. House and a WSU alumnus, said he is angered by tax programs that punish working people.

“It pisses me off is what it does,” Thompson said. “Because I’m tired of working-class people being the ones that fit the bill for the rich corporations and the ultra-wealthy so that they can get another yacht.”