Alumnus’ startup aims to shape ‘the next Michael Jordan of eSports’ 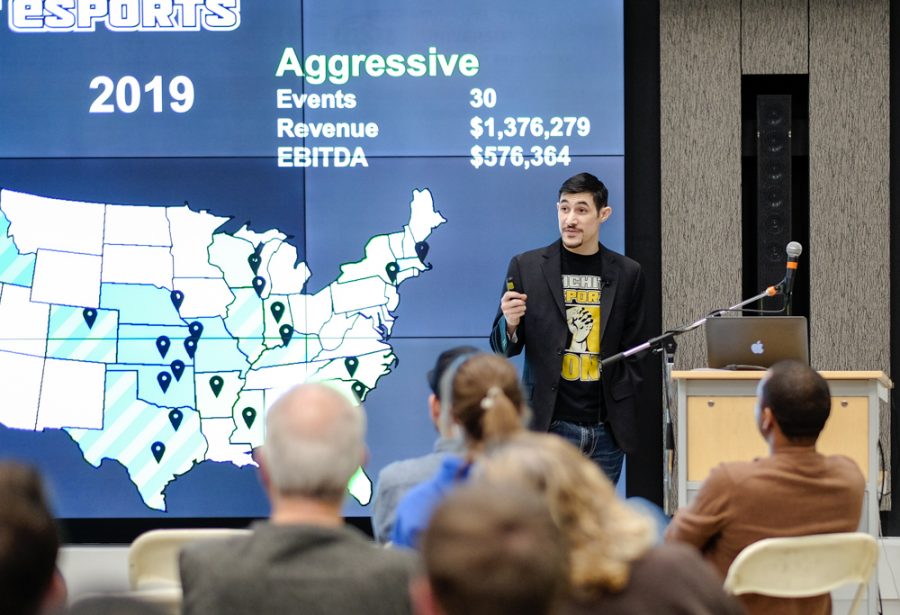 Four early-stage company entrepreneurs presented their businesses ventures at Demo Day Tuesday evening in the Experiential Engineering Building. One of those businesses got its start on Wichita State’s campus.

Ramsey Jamoul, a WSU alumnus and CEO of Midwest eSports, described his company as a “pipeline” for collegiate and amateur video game players into the world of professional eSports.

“Midwest eSports connects the dots,” Jamoul said. “Through our competitions, we’ll provide opportunities for players, for spectators, and for communities.”

Jamoul said the fast-growing world of competitive eSports has attracted the attention of investors as well as consumers.

“We’re providing players the opportunity to compete and practice and become their very best,” he said. “[We] will produce the next Michael Jordan of eSports.”

Jamoul began his company with a student organization in 2012 — WSU’s own eSports team.

They hosted their own events, as well as the Wichita eSports Convention in 2015.

As Wichita eSports developed beyond campus, it became Midwest eSports, a company with a larger scope.

Demo Day was hosted by LaunchPrep, a partnership between the e2e Accelerator and Wichita State’s Center for Entrepreneurship. Through LaunchPrep’s three-month program, selected early-stage companies from Wichita receive mentorship and guidance from some of the city’s most successful entrepreneurs.

Of the six companies who participated in LaunchPrep’s 2017 program, four of them presented at at Demo Day: Midwest eSports, Bliss Bouldering & Climbing Complex, JogAlong Strollers, and Moonbase Labs.

Jamoul said that the LaunchPrep program could be a great opportunity for WSU students who want to be entrepreneurs because of the vetting and growth that his company received from the program’s mentors.

“We all have great ideas,” Jamoul said. “But do they really sell? That was the point (the mentors) helped us reach.”

For students at WSU who want to own a successful business in the future, Jamoul had one word of advice — “Persistence.”

John Dascher, president and CEO of e2e Accelerator, closed the evening by recognizing those in attendance for their contributions to the LaunchPrep program.

“None of this really existed two years ago, and we’re all really proud of it,” Dascher said.

“We’re going to keep going because this is exactly what Wichita needs to grow and become that entrepreneurial city again that it once, so vibrantly, was,” Dascher said.