‘Last Flag Flying’ is only at half-mast 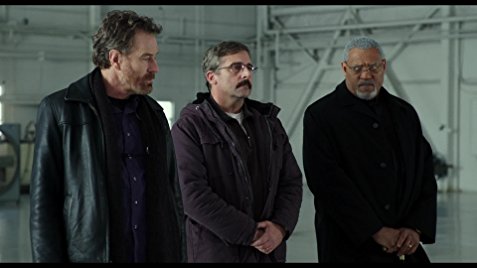 When the Twin Towers fell on that fateful September morning 16 years ago, they collapsed into a pile of burning rubble emitting a black plumage of smoke that will be forever burned into the national consciousness.

“Last Flag Flying,” the latest film from acclaimed director Richard Linklater (“Before” trilogy and “Boyhood”), attempts to capture the aftermath of receiving one of those messages — the opening of a Pandora’s Box that can never be closed — and, while his attempt is admirable, the final product is unfortunately bogged down by clunky pacing and a script that swings wildly from poignant and affecting to uncharacteristically amateurish.

“Last Flag Flying” follows the journey of three Vietnam veterans, played with great skill and reserved grace by Steve Carell, Laurence Fishburne, and Bryan Cranston, as they reunite after the death of Larry “Doc” Shepherd’s (Steve Carell) son in Iraq.

It’s a road-trip movie, albeit one with a dark tone and a somber atmosphere, but a road-trip movie nonetheless. This road-trip is brought on by the most tragic of circumstances, and the film doesn’t let the viewer forget that, but it’s nicely interspersed with scenes of genuine warmth and humor as the three veterans reignite old friendships.

Some of the nicest scenes in this movie come not from the heavy-handed exploration of guilt and loss, but from the three actors simply performing at the top of their game, shooting the bull with one another and reminiscing on muddled memories. However, these scenes are few and far between, and, for every one that works, there is another that doesn’t pack the same clout.

There’s a scene in which the three men, adrift in New York, go to purchase cell phones. These men are old and technophobic, relics of an age when a telephone call was not a daily occurrence, but a hallowed ritual. (This film is so deeply steeped in the early 2000’s that it’s almost burdensome). It’s supposed to be a scene that backdrops the ideas of time and change — how society has left these men behind despite what they’ve given to society — and how they’re trying to adapt to all of the progress unfolding around them.

But the writing doesn’t communicate any of this. Instead, what we’re left with is a cliché scene in which Steve Carell and Bryan Cranston try to convince Laurence Fishburne that a cellphone would give him a chance to call his wife more often.

There’s no real exploration of how this technology has evolved and how it has affected them. Opportunities to explore these societal shifts are either passed on or handled so clumsily that they provide no real insight.

Furthermore, the interjection of personal politics into the film’s narrative doesn’t develop naturally. Rather, it is shoehorned into awkward monologues that feel unnecessary. Numerous parallels are drawn between Vietnam and Iraq — both being wars fought against an enemy whose tactics and politics verge on the guerrilla — but these comparisons just dangle in the air after leaving the character’s mouths. There isn’t any follow up.

The audience is left with a strange feeling — like a key part of the script was erased. Characters walk and talk, but rarely say much of anything.

The greatest sin this film commits though, is that it doesn’t use any of the capabilities afforded to it by the medium itself to express anything about its characters. Linklater’s films are usually dialogue-heavy (he has never been a stylist), but the camerawork and mechanics of the film have worked in concert with the characters (see “Before Sunrise,” for example). That simply isn’t true here.

“Last Flag Flying” is a movie in which characters talk in a room before moving on and talking in another room. Visually, it results in a monotonous and boring movie. Having characters just talk in a room can work (“12 Angry Men”), but the camerawork and blocking and mise-en-scène needs to work overtime in order to compensate for that confined space.

“Last Flag Flying” squanders these opportunities and blocks its actors into the same dull shape over and over again.

“Last Flag Flying” features one of our best American directors and some of our best American actors tackling a universal issue from a deeply American viewpoint. Yet, given this level of talent and pedigree, the film mostly falls flat when it should be affecting, poignant, and a meditation on loss and patriotism in the twenty-first century.