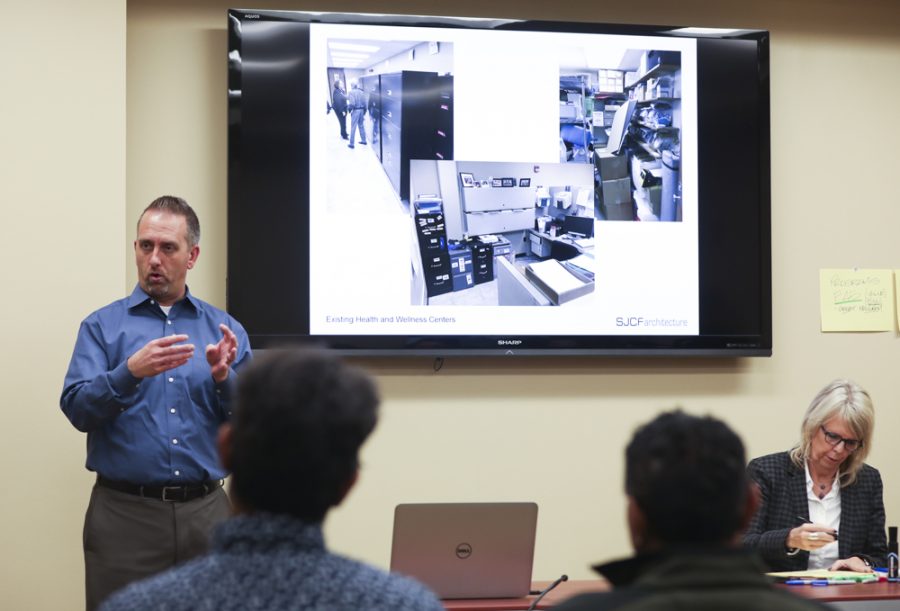 Matt Hamm, SJCF Architecture, answers questions and gathers ideas for the new YMCA on campus during a forum in the Rhatigan Student Center.

A small group of students met with architects from SJCF — a firm that builds YMCA facilities around the greater Wichita area — to offer input Thursday on the joint YMCA and wellness facility set to be built on Innovation Campus within the next few years.

Wichita State and the YMCA have yet to reach an official agreement, but the facility, which will be located across Mike Oatman Drive from the Eck Stadium parking lot, is being paid for by a health and wellness student fee that was enacted at the beginning of the fall semester.

Architect Matt Hamm said student suggestions on amenities and programs will be evaluated by the YMCA and university stakeholders.

“The next step is to take all this input, prioritize it, and work within our budget to get the biggest bang for the amount of money that we have,” Hamm said.

“Student stakeholders are invited to every meeting, so students will be involved as well.”

Ciaban Peterson, vice president of Wichita State’s Student Veterans Organization, recommended a relaxation room in the wellness center where students can rest in between classes, citing the success of such a room in the Military and Veteran Student Center.

Discussion expanded to a relaxation and meditation room that could feature salt lamps, space for yoga mats, and massage chairs.

Students also expressed their desire for pickleball courts, an outdoor pool, and student-driven fitness programs similar to F45, which has been offered at the Heskett Center.

“We need to make sure people feel safe coming to our facilities,” Vithanage said. “I have a friend who’s transitioning, and he doesn’t feel comfortable going to the Heskett men’s locker room because he doesn’t feel like he can be himself in there, so we need more spaces.”

Hamm said the architects will be working with the university to establish such spaces.

When the topic of campus concealed carry was broached, architects said the fitness facility will not have lockers to store firearms, meaning students and other patrons will have to find an alternative means of storage.

“It’s your responsibility to not go into a facility where you’re not going to be right next to your [gun],” architect Shannon Bohm said.

Vithanage said that, even though he will graduate next semester, he feels an obligation to future students to give his input on the facility.

“I’m leaving this campus in May, but I can pay it forward by making it a facility that I would like to be in for the students that will be here in the future,” Vithanage said.

Peterson said he was encouraged by the collaborative tone of the focus group.

“I feel like having this was really good,” Peterson said. “I’m glad there is some collaboration going on. It feels like, and I hope in the future that this will be the case still — that there will be things that feel like collaborations more than a presentation.”

Student Body President Paige Hungate and Student Body Vice President Breck Towner will continue to meet with YMCA officials and university stakeholders over winter break and next semester to discuss the Y partnership. Hungate said two student senators will be brought to each meeting.

Hungate said she viewed the focus group as a success, and hopes students will continue to voice their opinions on the new facility.

“I wish there would have been more students there,” Hungate said. “I do understand though, it being the week before finals, it’s so crazy busy. This is just an idea we had last week, so we wanted to have it before school ended.”

Wednesday, the architects met with the Student Government Association before the weekly senate meeting to discuss the facility.

“We talked more about wellness at the one last night — not so much about fitness,” Hungate said. “We talked about the need for private waiting rooms and having one check-in desk and then two different hallways if you’re going to student health or going to counseling, and making it a more inviting environment there.”

Hungate, who has traveled with the architects to several facilities on college campuses, said WSU can stand to gain from evaluating other colleges’ successes and failures.

“One of the best things about it was learning what they did wrong and what they wish they would have done — not necessarily what the facilities look like now, but just trying to figure out the lessons learned.”