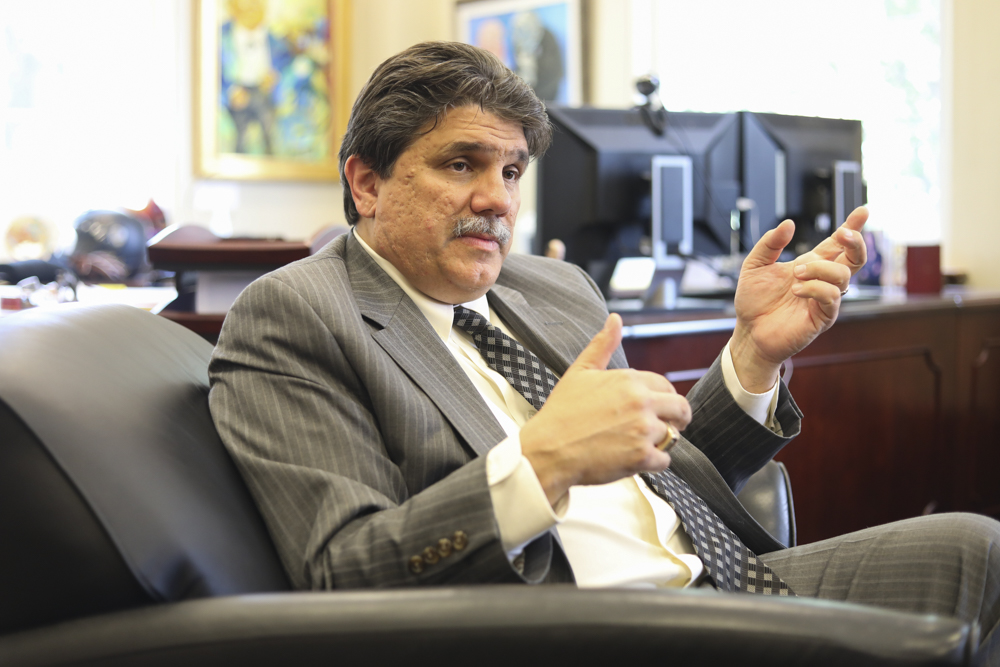 Provost and Senior Vice President Tony Vizzini discusses his past in his office for a profile in October 2017. Vizzini has taken "authorized leave" for the spring semester as he seeks a new job.

Provost and Senior Vice President Tony Vizzini will take “authorized leave during spring semester to focus on his professional goals,” according to a statement released Friday by Wichita State President John Bardo.

Vizzini was hired as vice president of academic affairs at Wichita State in 2013. In 2014, he was promoted to provost and senior vice president. Last year he served briefly as acting vice president for student affairs. His paid leave will begin Monday.

Bardo said the fifth year of a chief academic officer, the position Vizzini holds, “is a normal career point to consider new positions.”

In November, The Sunflower reported Vizzini had been selected as a finalist for the chancellor search at Washington State University Tri-Cities. He did not get that job, which was the second chancellor position for which he had been named a finalist. In late October, according to South Dakota School of Mines and Research, Vizzini made the list of finalists in that school’s chancellor search. Vizzini did not get the job at SD Mines, which he would have started Jan. 1.

Vizzini did not respond to The Sunflower’s questions about how his job search would affect his duties at WSU in November or to questions early Friday.

“As many of you know first-hand,” Bardo said, “Tony (Vizzini) is a wonderful colleague. I have treasured his leadership, critical thinking, enthusiasm and entrepreneurial spirit. He can take a great deal of pride in the people and programs he has brought to WSU and how he has helped WSU to reach new levels of excellence since his arrival in 2013.”

“In his 22 years as a faculty member, department chair and most recently as senior associate vice president for academic affairs, Rick has proven himself a highly capable leader in major matters including HLC reaccreditation, WATC affiliation and strategic enrollment management. I’ve asked him to sustain the strong momentum in Academic Affairs during his time in this interim role,” Bardo said.

It is not clear if Vizzini will be involved in the search for a new liberal arts and sciences dean to replace Ron Matson following his retirement, but Bardo said Vizzini “will be available to wrap up some matters and advise us, but he will not be involved in daily operations.”

“Over the next several weeks I plan to consult with deans, constituent group heads and other appropriate individuals on a national search process for a new chief academic officer,” Bardo said.