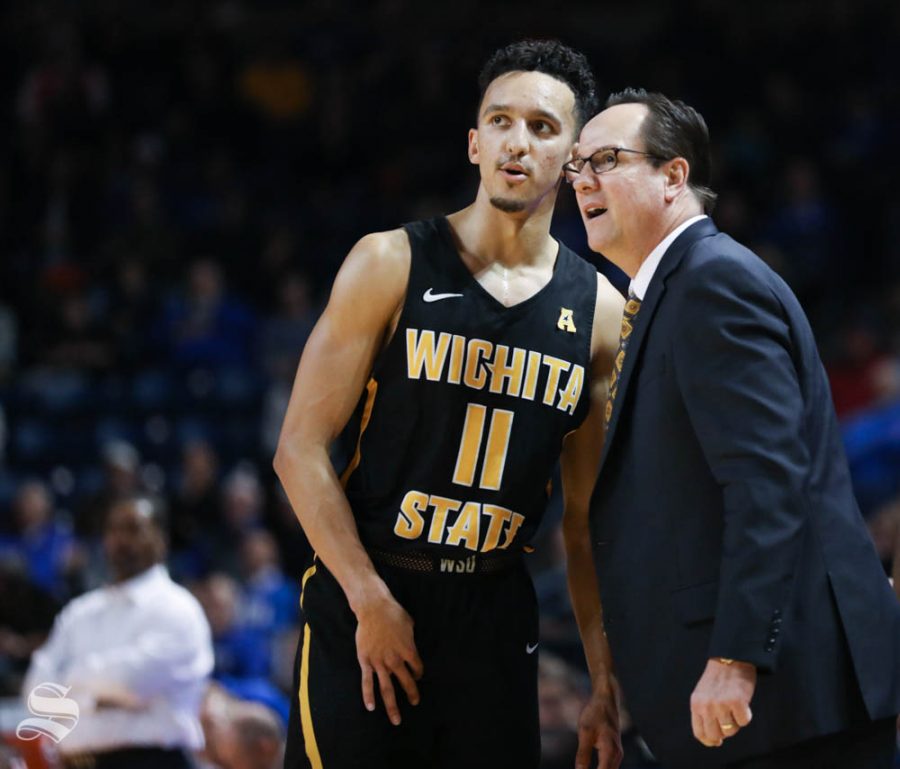 Wichita State guard Landry Shamet and Wichita State head coach Gregg Marshall talk during a free throw against the Tulsa Golden Hurricane during the second half in Reynolds Center.

No. 7 Wichita State extended their road win streak last week with wins over East Carolina and Tulsa. Despite their back-to-back road wins, the Shockers dropped two spots in this week’s AP Poll.

After a week on the road, the Shockers return to the Roundhouse to face SMU, the defending conference champion.

Last season, SMU finished first in both the regular season and conference tournament after going 17-1 in the American.

SMU also had the 2016-17 American Athletic Conference Player of the Year, Semi Ojeleye. The Mustangs lost two standouts to the NBA Draft from last season: Ojeleye and Sterling Brown.

Although they lost two standout players, SMU was still picked to finish fourth in the conference and have another player in the running for Player of the Year: Shake Milton.

Milton has scored double-digits in all 18 games so far this season. He is ranked fifth in the American for scoring average (17.4), he’s third for assists (4.5), and averages the second-most minutes with 36.3.

“He’s super talented; 6-foot-6. He’s long and he can shoot it over you if you are not right there on him…you have to be standing on his toes…and then he can bounce it,” Head Coach Gregg Marshall said. “Dynamic talent, preseason player of the year in the league. He’ll be a handful.”

SMU is 12-6 overall and 2-3 in the American. The Mustangs are currently on their longest losing streak since March of 2014 after dropping three straight.

The Mustangs have defeated UCF and USF and lost to Tulane, Cincinnati, and most recently by two to Temple where they snapped their 33-game home win streak.

“I don’t know what is going on in their locker room or in there practices. I just know they are a very talented team. They are a well-coached team…They had the nation’s longest win streak at home snapped just recently by a very good Temple team that played very well that night,” Marshall said. “I just watched the individual players, and SMU has tremendous talent.”

The Mustang’s dribble-drive offense is something that Marshall thinks can be contained with efficient one-on-one defense and communication.

“We’ve got to defend one-on-one, for sure. We’ve got to communicate well and be in the gaps,” Marshall said. “’Guard your yard.’ Contest all shots…they can really make shots…and hopefully limit them to one, rebound it and head the other way.”

Wichita State is also in the top-25 for three-point percentage. Ranked at 21, The Shockers have a .408 percentage.

The Shockers have a 16.6 scoring margin and average 42.0 rebounds per game with a 10.8 rebounding margin.

Senior center Shaquille Morris is one win away from becoming just the seventh Shocker in school history  to hit the 100 win mark. If WSU gets the win over SMU, he will join senior forward Rashard Kelly who hit that milestone earlier this season.

Tipoff is at 6 p.m. and will be broadcasted on ESPNU.