Tit for tat: SMU snaps Shockers’ home win streak after losing their own 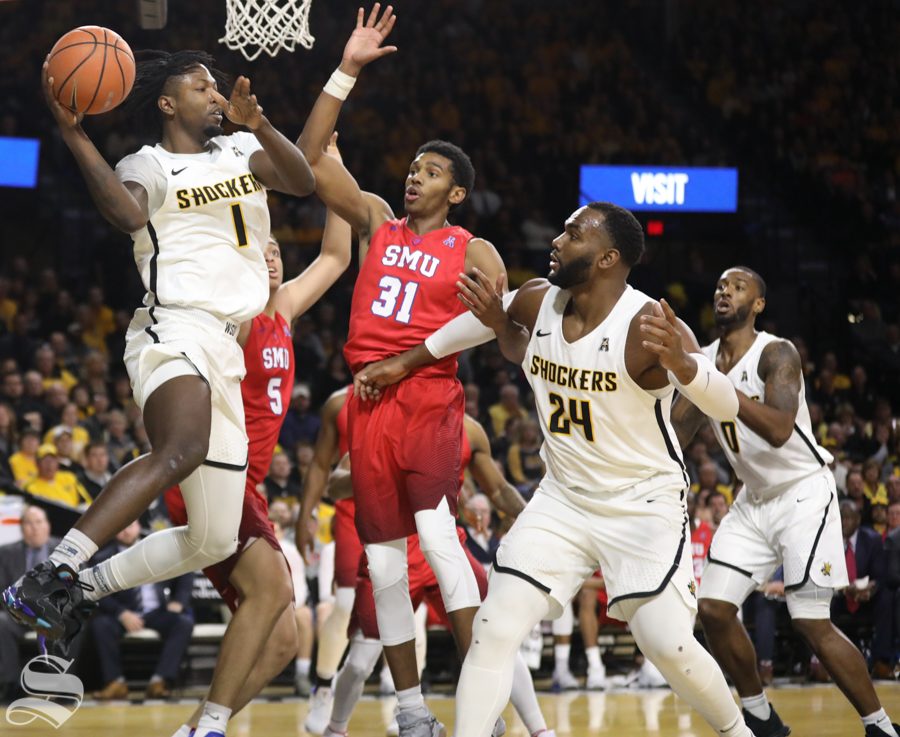 Unranked SMU came into Wednesday’s matchup with No. 7 Wichita State with a chip on their shoulder.

The Mustangs came off of their longest losing streak since March of 2014 and their 33-game home winning streak was broken by Temple prior to playing The Shockers.

The defending American Athletic Conference champions needed an opportunity to redeem themselves. They did so by breaking Wichita State’s home game win streak of 27.

The Shockers got off to an early 8-2 lead until The Mustangs took control of the game and didn’t loosen the reigns.

By halftime, SMU had a three-point lead. Wichita State was able to get within one point until SMU went on an 8-0 run to get up by nine.

With two minutes left of the game, Wichita State was down by 11 until threes from sophomore guards Landry Shamet and Austin Reaves and senior guard Conner Frankamp.

The Shockers appeared to have a chance in the final moments of the game where they were within three.

“Coming back showed some toughness, we hit some threes late but we can’t wait until two minutes left in the game to start pressing really hard and giving it all we have,” Frankamp said.

Despite their efforts, Wichita State was not able to stop SMU and pull ahead. The Mustangs defeated The Shockers by five.

“We’re not going to quit. We were just a day late and a dollar short,” Head Coach Gregg Marshall said. “We didn’t have quite enough time.”

SMU’s guard Shake Milton had the best game of his career with a career-best 33 points, three rebounds, five assists, and two turnovers in his 40 minutes of play.

“I didn’t know he was going to play like that…that was more than perfect. I don’t know how you can play better than he played tonight,” SMU Head Coach Tim Jankovich said. “He controlled the whole game.”

Frankamp and Shamet believe that the loss will fuel The Shockers’ fire to come back better.

“We just have to get better, we can’t get complacent,” Frankamp said. “We know every single night is going to be a tough challenge in this league.”

Shamet says this team has faced resilience in the face of adversity before, and losing against SMU is nothing different.

“Something that we’ve shown before multiple times this season is not giving up, not quitting, or folding or anything regardless of the circumstances.” Shamet said. “It’s just something this team has. We don’t have guys that’ll just lay down and quit.”

The Shockers head to Houston on Saturday to meet UofH for the second time this season. Tipoff is at 11 a.m. and will be broadcasted on ESPNU.