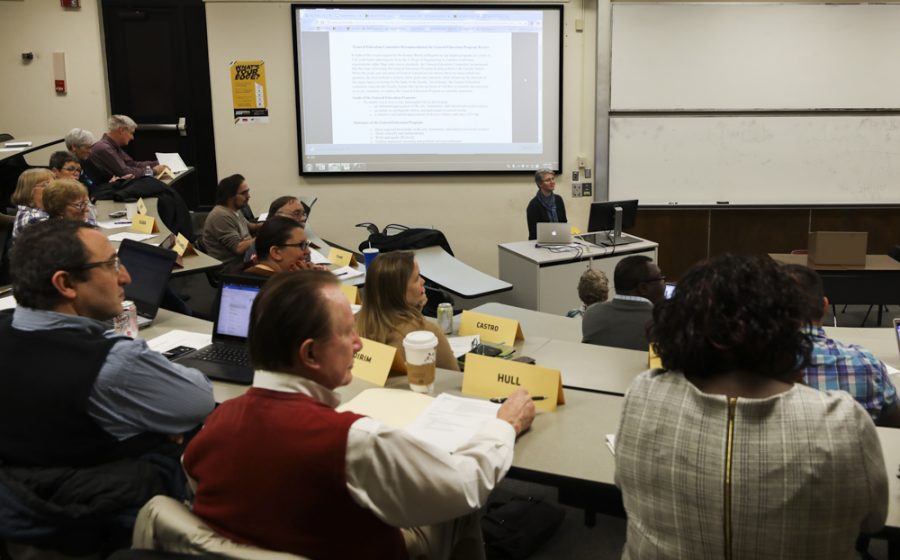 Faculty senators listen as Ron Matson, dean of the college of liberal arts and sciences, talks about the history of the general education curriculum during the first faculty senate meeting of the year in Clinton Hall.

Faculty Senate President Carolyn Shaw said she and Betty Smith-Campbell — Faculty Senate president-elect and senator from the school of nursing — were asked to serve on the committee by President John Bardo.

The committee, which will be chaired by Vice President for Finance and Administration Werner Golling, is in charge of the national search for a new provost following Provost and Senior Vice President Tony Vizzini’s paid leave from the university “to focus on his professional goals.”

Vizzini was named a finalist in a chancellor search at another university, The Sunflower reported in November.

The provost is the top academic officer, and assumes the university president’s role if the president is unable to serve. Rick Muma, senior associate vice president for academic affairs and strategic enrollment management will serve as interim provost until the position is filled.

Shaw said in an email that provost search committee members have not been finalized yet, “but will likely have about 15 members from units all across campus that interact regularly with the Office of Academic Affairs.”

She said the university aims to have the position filled by the start of the next academic year.

“President Bardo said he thinks it’s very important that the Faculty Senate have a good representation, that this is a very important search, and wants us to be a key part of it,” Shaw said.

Ballots were passed out to senators, who voted confidentially for their picks for the provost search committee.