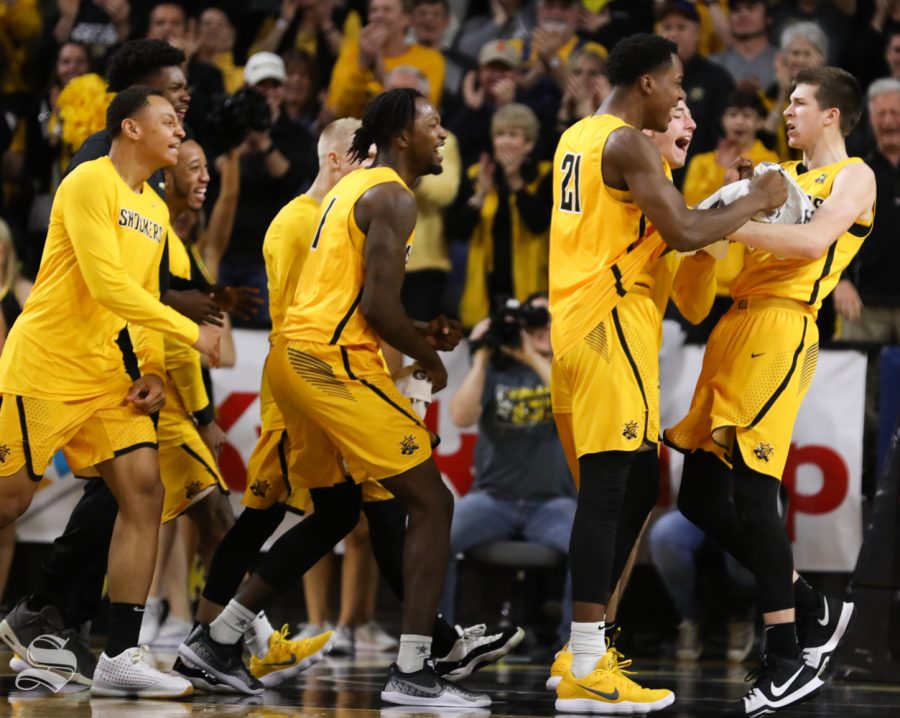 Wichita State Shockers celebrates with Wichita State guard Austin Reaves, right, after Reaves finished the first half 7-8 from beyond the arc against the Tulsa Golden Hurricane at Koch Arena.

No. 17 Wichita State picked up their 700th win at Charles Koch Arena with a 19-point victory over Tulsa.

This time around, shots were not falling for the Frankamp/Shamet backcourt, leaving an opportunity for someone else to step up.

That someone was sophomore guard Austin Reaves.

Reaves went off in the first half with 23 points and sinking seven of his eight three-point attempts.

Tulsa was forced to call a timeout after Reaves hit his seventh three, where The Shockers stormed the court to congratulate him. Reaves said he can’t put that feeling into words.

“I honestly couldn’t explain it. It was one of those adrenaline rushes that you get,” Reaves said. “I’m blessed to play on a team like this…a group of guys that are so close, that love each other like we do, you don’t see it very much.”

Reaves, in the first half alone, tied for the second-most three’s in a game in The American this season.

The rest of the team, for that matter, wasn’t seeing the same results as Reaves.

“If your name wasn’t Austin Reaves, you didn’t make a three in the first half,” Head Coach Gregg Marshall said. “We were 0-11 from the three other than him.”

Despite the rest of the team, with the exception of senior center Shaquille Morris, not putting up significant numbers, The Shockers still led by 10 at the half.

In the second half, Tulsa was able to get within four points. Another close game with Tulsa is something The Shockers did not want to see.

Wichita State went on a 19-4 run over Tulsa to secure the win.

“It tells me they want to win…there was tremendous resolve and toughness when it got to four,” Marshall said. “It was anybody’s game at that point.”

Reaves did not score in the second half, but Morris and senior forward Darral Willis was able to compensate.

Morris finished with 20 points, and Willis with 15.

“He’s a facilitator. He’s going to do the dirty work,” Marshall said. “He knows he’s not the most pretty jump shooter out there, but he’s still a very effective player and helps us win in many ways.”

Morris also finished with two blocks which made him second on WSU’s all-time blocks list. Morris now has 37 blocks this season, which surpassed his block count from last season by two.

“All my life I have been a rim protector…our guards, if they kinda get beat off of the dribble a little bit or something, I’m the insurance,” Morris said. “I’m just there to clean the little things up.”

Morris said the past two bounce-back wins were much needed for the team moving forward.

“It was really huge. we needed to get to feeling confident in what we do,” Morris said. “The grind isn’t going to stop no matter what.”

The Shockers hit the road and play Temple on Thursday. Tipoff is at 6 p.m. and will be broadcasted on ESPN2.