Game on: Wichita State will host the city’s esports convention 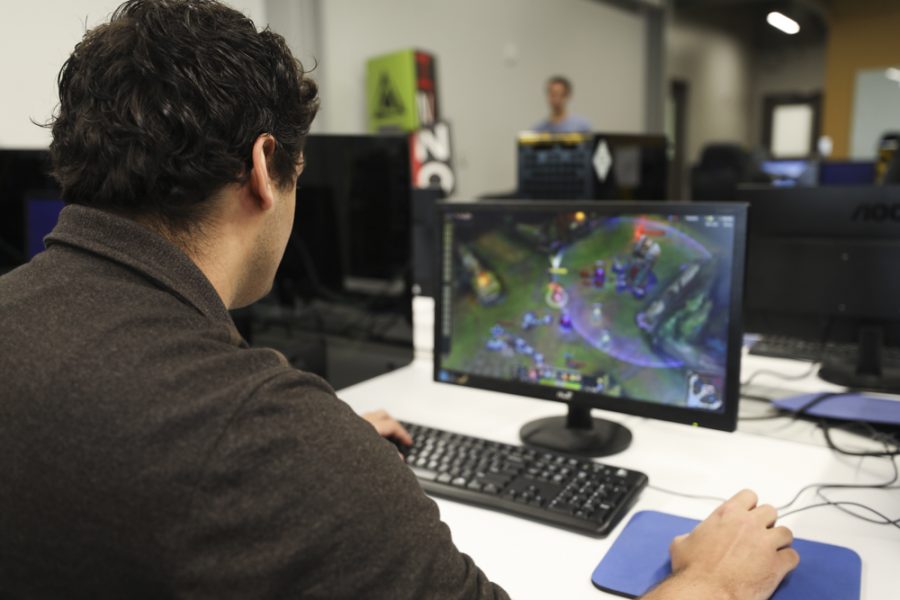 Chandler Hoskins, who goes by "Lightswørn" in League of Legends, has played the online competitive game since 2014.

Chandler Hoskins is one of five team members from Wichita State’s own League of Legends team competing in a tournament hosted on campus annually.

Hoskins was born and raised in Minnesota, but moved to Athol — A northwestern Kansas city with population of 41 — with his mother as a junior in high school.

After graduating, he enrolled at Fort Hays State University, where he studied psychology for two years.

Hoskins — now a junior at Wichita State — said that he transferred from Fort Hays because he did not fit into student life there.

“Everyone just drinks. If you’re not into that, then there’s nothing else for you to do,” he said.

It was during his freshman year at WSU that Hoskins discovered League of Legends after seeing fellow students playing it across the hall from his dorm room.

“They always had like four or five people in a small dorm, and they were always playing League,” he said. “I stopped in one time and saw them playing, and it looked pretty fun, so I went and downloaded it.”

League of Legends — commonly referred to simply as ‘League’ — is an online match-based game where two teams of five compete for control over a limited map in order to ultimately destroy the other team’s base and win.

“It was rough, but I spent a lot of time working on it,” he said. “I really enjoyed (the game) and I’m competitive, and I didn’t have much else to do besides class.”

Garcia is a high-ranking player on League of Legends’ North American server. As a professional, he has competed on established teams such as Cloud 9, and recently, the Golden State Guardians — an NBA franchise team added to The League of Legends Championship Series this year.

Advice from his high-ranking friends, along with years of practice and studying, helped Hoskins move up in ranks. Reaching all the way to the second highest division in Diamond, he has climbed a total of 23 divisions in his League of Legends career.

After playing competitively alone, and “semi-competitively” with friends, Hoskins was looking to join a team.

“I’ve always been a competitive player,” Hoskins said. “Playing alone is fine for that, but when I heard there was an esports organization and a League team (at WSU), I thought I’d try it out.”

As a team, Hoskins said that the Alpha Shocks still have “a lot of work to do,” but he has high hopes for the tournament.

“We just did the seeding for the tournament, and we didn’t do so hot,” he said.

WSU’s team, the Wichita State Alpha Shocks, were seeded 14th out of 15 total seeds in the upcoming $20k League of Legends tournament, according to Wichita eSports’ official Facebook page. They face the third-seed Robert Morris University Eagles in the first round.

Hoskins said that Robert Morris University has a reputation in the esports industry.

“They were one of the first universities to bring esports to the university,” Hoskins said. “They give out pretty good scholarships for it, too.”

Hoskins said that he never thought he would be able to play League for a university, but that he hopes there will be scholarship opportunities for student esports competitors at WSU in the future.

“If the students at WSU came out to support their team during the tournament, it’d mean a lot to us,” Hoskins said.

“If we do well at tournaments, people are going to want to go to WSU and join the e-sports teams, and that’s what’s going to bring the scholarships for us,” he said.

Hoskins said that many people in the United States do not consider League of Legends, among other esports, to be “actual” sports.

“A lot of people who don’t think it’s a sport don’t know what it takes to play at a high level. It takes a lot of decision-making, teamwork skills, especially at the higher gameplay,” he said.

“In other countries like South Korea, and even Europe, it’s more accepted for people to play video games competitively,” Hoskins said. “It’s seen more as a sport, and not just a bunch of kids trying to make it something.”

Hoskins said that attitudes towards competitive esports in the United States are improving, mentioning the recent addition of NBA franchising in the game’s professional league, the League of Legends Championship Series.

He said he hopes to have a shot at the professionals.

“There are people younger than me in the NFL making millions, and I’m working at Dillon’s,” he said. “You don’t get a lot of opportunities like that, so if one was offered, I would definitely take it.”

At an entrepreneurial start-up presentation at the Experiential Engineering Building in December, Ramsey Jamoul — WSU alumnus and CEO of Wichita eSports — described his company as a “pipeline” for collegiate and amateur video game players into the world of professional esports.

“Through our competitions, amateur and collegiate players have the opportunity to compete, struggle and grow,” Jamoul said. “That opportunity will produce the next ‘Michael Jordan’ of e-sports.”

Hoskins offered points of advice for any League of Legends player who wants to improve their gameplay.

“The best way to improve is to re-watch the games you’ve played, and see what you could have done better,” he said.

“Instead of going into every game thinking ‘I need to win this game’, you focus on the little things,” Hoskins said. “When you perfect the small things, you will be more consistent and you’ll win more consistently.”

For students wanting to become a part of the esports community at Wichita State, Hoskins said that “it’s definitely worth trying out.”

“Even if the competitive scene is not for you, there are a lot of casual players and it’s a good way to meet new people,” he said. “Whether casual or competitive, we’re always looking for players.”