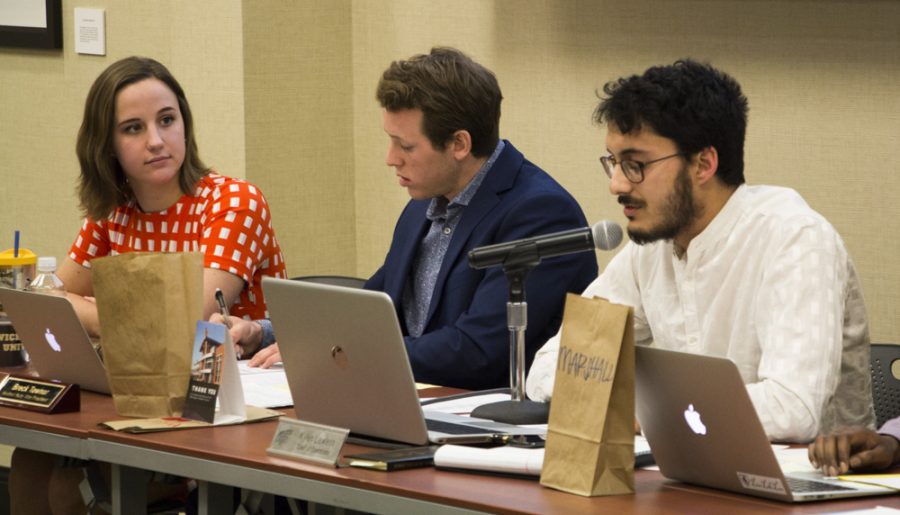 Paige Hungate, Breck Towner, and Kylen Lawless during the SGA meeting on February 14, 2018.

Student Body President Paige Hungate made a remark that caught some senators off guard and sparked concerns over a lack of transparency in student government during the closing remarks of Wednesday’s student senate meeting.

“Senate is not the time for ‘gotcha’ moments,” Hungate said as senators were preparing to leave. “So if you have questions prepared already, you should ask people for the answers to those questions prior to.” Hungate left immediately following the meeting.

The remark came shortly after an extended questioning and debate period over the proposed election equity act.

The proposed amendment, which would have dissolved the current ticket system in SGA elections in favor of candidates campaigning and being elected individually, was ultimately tabled until after this year’s student government elections.

Hungate later said her comment was referring to questions asked by multiple senators to Chief of Operations Kylen Lawless about data he presented over student government elections at comparable universities.

Lawless said Wichita State was one of two state universities in Kansas using the ticket system in elections and that most other comparable universities use an individual election system. He was unable to answer many of the questions from senators regarding the specifics of the data.

When reached by phone after the meeting, Hungate said she felt senators asked questions in an attempt to undermine Lawless and the rest of the executive committee. She also said that senators need to do their “due diligence” outside of the meetings to learn about legislation.

“It wouldn’t have been that senators were just coming to us and we were answering those questions behind closed doors. We would have been able to compile that information and present it to the senate as a whole,” Hungate said over the phone.

Senator Shelby Rowell responded to Hungate’s comments during the meeting.

“I feel like the opportunity to ask when it’s a public session is important. So I don’t necessarily really appreciate being dictated to on questions when I think it’s important for not only us to know, but for the entire senate to know and the entire student body to know,” Rowell said to Hungate.

Rowell said she understands how asking questions before meetings can help streamline the process, but disagreed with Hungate’s comment and felt that she needed to speak up.

“Watching other senators’ faces fall at the end of the meeting during announcements quite frankly made me feel like something should be said,” Rowell said. “Many senators were taken aback or hurt by the comments.”

Returning adult senator Kathy Bond said the election amendment was a “great opportunity for change, but not the right time.

“I want to know. What is the hurry?” Bond said.

Former Student Body President Joseph Shepard spoke to the student senate when the amendment was presented, saying it was a “great piece” of legislation.

“I do believe that it ends the divides a lot of people have subconsciously when going into the election season,” Shepard said.

Still, Shepard urged senators to vote against the amendment.

Shepard said that campaigns have already been preparing for election season for months and passing the amendment “so late in the game” would “hinder the progress” of potential candidates.

“It just seemed intentional,” Shepard said. “It seems that we are purposely working to hinder the growth and progress of certain people running.”

Shepard didn’t mention any specific candidates he felt were being targeted by the legislation.

Student Body Vice President Breck Towner said the delay in proposing the amendment was due to the initial election reform bill taking longer than expected to pass.

Towner said that dissolving the ticket system wasn’t brought up until last month.

Senator Drew Lampson proposed tabling the amendment until after the election.

“Regardless if they wanted to pass it or not, we felt it was the right thing to do to at least talk about it or at least offer the decision,” Towner said. “And, ultimately, tonight they decided to table it.”

The senate will address the amendment again during its March 14 meeting.

Hungate’s comment is the latest in an ongoing dispute over transparency in student government.

When the election equity act was initially discussed during last week’s senate meeting, senators brought up concerns over transparency and being left out as decisions were made “behind closed doors.”

“It’s not so much that it was talked about behind closed doors,” Hungate said during last week’s senate meeting. “We were actively telling people we were working on that election bill and those were open meetings. Nobody attended.”

Earlier this month, Hungate announced during her monthly “Engage with Paige” video that the student government discontinued its student-funded College Readership Program. The decision came without a vote from the senate.

In an email to The Sunflower, Hungate said it is not a “lack of transparency problem” but “a lack of individuals paying attention at meetings to what we say.”

Last semester, the student government stopped livestreaming its monthly meetings due to alleged Americans with Disabilities Act conflicts. Hungate also put an end to the livestream of the monthly “Engage with Paige” videos, opting to field the questions in advance and later upload the videos to YouTube.

In the last “Engage with Paige” session, only one student participated — jokingly asking a question about Hungate’s rapping ability, which went unanswered.

Hungate said she wants SGA to be efficient while remaining as transparent as possible.

“Efficiency is important in SGA,” Rowell said following Wednesday’s meeting. “But not at the price of transparency and trust with our constituents.”