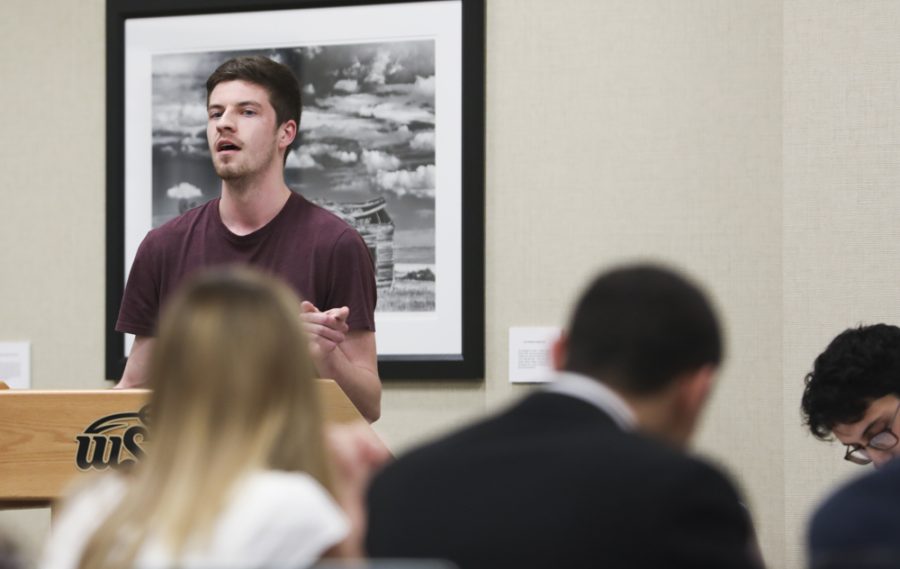 Ryan Lynch, captain of BAJA SAE, talks about the impact a cut to the funding would have on the club during the SGA meeting.

The Formula Team and BAJA, both affiliated with the Society of Automotive Engineers, were set to see their funds cut in half under the original budget recommendations released Monday.

The Formula Team, a group of students who design, build, and race a small race-car for competitions, requested $70,000 in funding. The committee recommended $33,033, a nearly 53 percent cut. The group received $66,066 each of the last five years.

BAJA is a group that designs and builds a small all-terrain vehicle for competition.

The group would face more than a 47 percent cut under Monday’s budget recommendation. They requested $14,250. The committee recommended $7,500.

Representatives from both groups said the recommended funding cuts would be devastating to the groups’ futures.

“Is it not the goal of the university to promote student involvement and experiential learning?” Luginbill-Ruder said.

Brennan said the recommended funds would not be enough to buy parts. The engine alone would take up nearly two-thirds of the funding, he said.

BAJA has experienced some difficulty over the last couple years. Car crashes and lack of access to manufacturing have prevented the group from competing. The group is preparing to compete next year, after recently moving into the Experiential Engineering Building.

Lynch said he felt the group had “made the longest stride in BAJA history” until he saw the recommended funding cut.

“This is our livelihood,” Lynch said. “I don’t know what I can do with my future if politics outweighs students.”