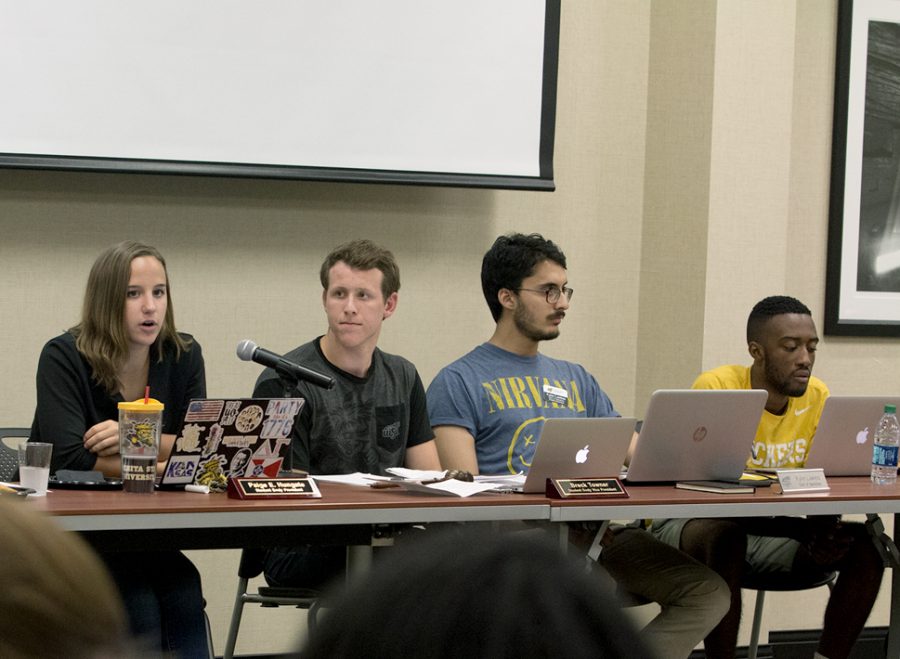 Two days after Wichita State President John Bardo called for the Student Fees Committee to reconvene and hold its deliberations in public, executive members of student government sent an email to Bardo calling his decision “the pinnacle of cowardice.”

“It was a choice solely made to get good press coverage,” the email read. “It has uprooted the entire process and has delegitimized it all.”

Bardo made the call for an open meeting following controversy when Wichita Eagle and Sunflower reporters were barred from entering the room where student fees deliberations were being discussed.

Bardo’s statement was emailed to Vice President of Student Affairs Teri Hall an hour before the Student Fees Committee’s recommendations were set to undergo a first reading at the student senate. Hall read the statement aloud at the beginning of the senate’s meeting last Wednesday.

“We had quizzes and exams that we did not study enough for due to student fees but this did not cross your mind as you instructed us less than an hour before our meeting of your decision,” the email read.

Hungate said she met with Bardo at 2:15 p.m. that day, hours before Bardo sent his statement to Hall, and the email criticized Bardo for not informing Hungate of the decision at that time.

“We spent hours on end preparing for this, in hearings and in the office.” the email read. “How shameful now that all of that is for naught.”

Last Wednesday, Bardo called for the Student Fees Committee to reconvene “so that the campus and the community know we are committed to the First Amendment and the freedom of speech required in a first-class university.”

Hungate said in a Facebook message that Bardo’s decision made it seem as if the students had “malicious intent” and were the ones behind the decision to close the meeting. Hungate said the decision was made “after they gave us legal advice on KOMA (Kansas Open Meetings Act) and its requirements.”

The day of the closed-door deliberations, Hall said the decision was a student government decision, but she was the person who initially told reporters the meeting was closed and is the chair of the committee.

“It seemed as though President Bardo’s decision was solely made to appease those who were frustrated at the closed deliberations,” Hungate said.

“It was simply based on the negative attention that the closed meetings brought about.”

Hungate said she and her student government cabinet were not angry with Bardo, and that the email wouldn’t “hinder our ability to work together.”

Hungate ran for student body president on a platform based on repairing the relationship between student government and university administration and often criticized the prior SGA session for “trashing” the administration.

Director of News and Media Relations Joe Kleinsasser said Bardo and Hungate agreed to discuss the email at their next meeting. Hungate said she will meet with Bardo next week.

The email made it clear that the message was directed specifically at Bardo.

“This is not directed to members of the President’s Executive Team who have continually shown their interest in supporting the [student government] association,” the email read. The letter from the cabinet also said it was not the opinion of the associations advisers or staff members.