Administrators abstain from voting to cut The Sunflower 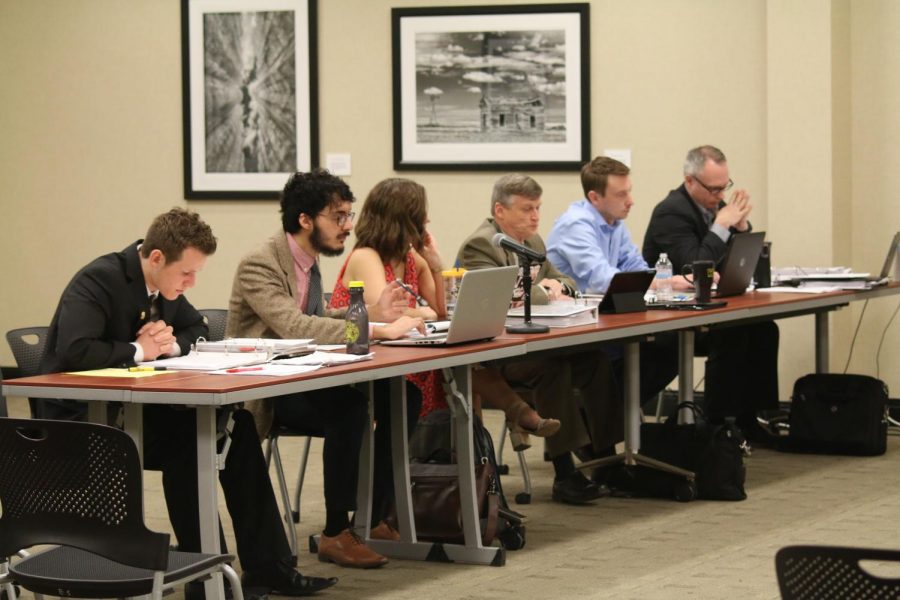 The Student Fee Committee deliberates student fee allocations. The committee voted to cut The Sunflower's funding by a third.

After being called to reconvene in public due to “First Amendment questions” after a nearly 50 percent cut to The Sunflower was recommended, the Student Fees Committee reconvened Friday for a re-do.

The Sunflower’s separate $5,000 request for equipment costs was recommended in-full.

Student Senator Shelby Rowell recommended $90,000 for The Sunflower. Student Body President Paige Hungate was adamant that she “did not feel comfortable” recommending more than $75,000.

“I think we had reasoning behind our $50,000, and I don’t know why we would jump up so significantly,” Hungate said.

Put to a vote, the $75,000 suggestion passed. Student Senators Walter Wright and Shelby Rowell opposed the $75,000 recommendation. Members of Hungate’s cabinet — Breck Tower, Marshall Johnson, Kylen Lawless, and Hungate herself — voted for the $75,000 allocation. Johnson, who was absent for supplemental presentations, initially voted against the $75,000 allocation because he wanted it to be lower, but changed his vote.

Hungate said the committee had agreed at a prior meeting that groups with other potential external revenue streams — such as The Sunflower — should receive 25 percent less than they did last year.

Rowell said The Sunflower shouldn’t be grouped together with other organizations with possible external revenue because The Sunflower pays students that participate.

“For The Sunflower, that’s a job,” Rowell said.

She said cutting funding from The Sunflower meant cutting staff positions, which are all filled by students.

“I don’t want to cut student opportunity from any group,” Rowell said.

“If we cut something so drastically to the point where students aren’t involved in it, then I don’t think we’re doing our job as a student fees committee to make sure that students are getting the most out of their fees,” Rowell said.

Hungate said that applied learning opportunities, such as what The Sunflower offers, should not be funded through student fees.

“I talked about this with Teri [Hall] yesterday, that we don’t fund applied learning through the student fees process, except for the EOF,” Hungate said.

Vice President for Student Affairs Teri Hall started the meeting by saying that student government did not violate the Kansas Open Meetings Act when the meeting was held behind closed doors. She also said that the student government is “not a legislative or administrative body because its role is advisory and cannot make official decisions like the president or KBOR (Kansas Board of Regents).”

“While some from WSU in the past said the deliberations were open, we haven’t found evidence that the issue has ever arisen,” Hall said.

Hall and Vice President of Administration and Finance Werner Golling abstained from voting.

The reasoning given for cutting The Sunflower’s funding was because it has the ability to be externally funded. The committee said it was applying the same standards to The Sunflower that it was to three other groups: BAJA SAE, Formula Team, and Mikrokosmos. Those groups are non-fixed-line items and recommendations for those groups can be changed by the Student Senate. The Sunflower’s recommendation cannot be changed by the Senate, but the Senate may vote against the entire student fees proposal.

The recommendation will undergo a first read Wednesday at 6:30 p.m. in the Rhatigan Student Center, room 233.