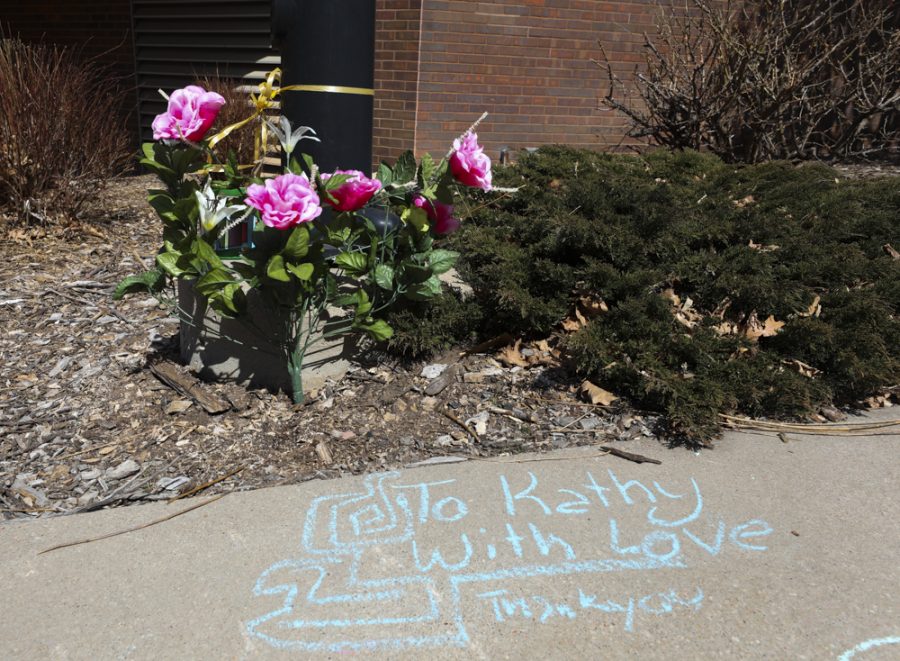 The memorial near the site of where staff member Kathy Hull was hit by a car. Hull later died of cardiac arrest as a result of the injuries.

A staff member who was hit by a car on Tuesday died this morning.

Kathy Hull, visual resources coordinator in the Wichita State art school, went into cardiac arrest this morning as a result of complications from her injury, according to her son.

Johnson said Hull suffered from inoperable bleeding of the brain after she was hit by a car at a crosswalk between Wilner Auditorium and McKnight Art Center.

“They attempted to keep her alive, but after thirty minutes I was asked to make the decision to keep trying or to let her pass,” Ram Lama Hull said in a Facebook message.

“In years prior, she had been very clear about what she’d want me to do in this kind of situation so I honored her wish to be allowed to die.

“She remembered the attempts to keep her own parents alive and didn’t want that,” Ram Lama Hull said.

While addressing the Faculty Senate, Johnson recalled when a history professor was hit by a car on campus about two years ago. The woman survived but “had to go through major rehab.” The incident was cited by campus police as a reason when they began issuing traffic tickets last semester.

“I’m sick and tired of this. This is the second time we’ve had people hit in the crosswalk,” Johnson said.

Johnson called for the installation of speed bumps on campus.

“I’ve never heard anything from administration,” Johnson said. “And now Kathy has died.”

“She was liked by the students and also by us (faculty),” Johnson said.

Kathy Hull’s son said one of the highlights of his mother’s career at WSU was her leadership role in creating an art exhibit in 2002, called Sacred Spaces. The exhibit featured paper cranes, mosaics, and painted doorways representing the five major world religions.

He said his mother loved sacred geometry as an art form.