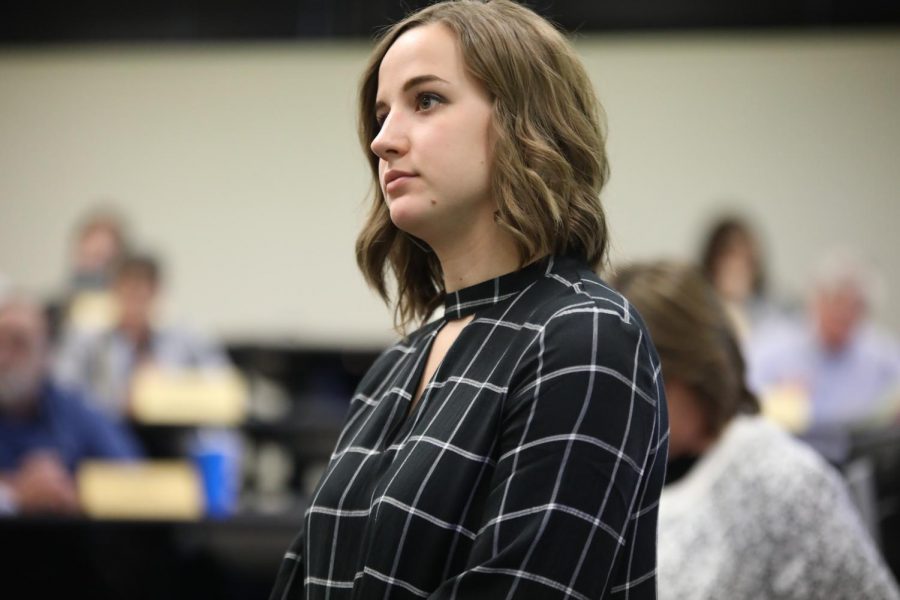 While addressing Faculty Senate about proposed cuts to The Sunflower’s funding Monday, Hungate said she expects Bardo to sign the budget passed by the student senate, “just because that’s the role that he has to play and SGA represents the students and our vote counts.”

Faculty Senate had just finished passing, unanimously, a resolution calling for Bardo to restore The Sunflower’s funding, which was cut in half during closed-door deliberations last month. The Student Fees Committee’s recommendation to The Sunflower increased by $25,000 after Bardo called for the deliberations to be re-held in public, citing “First Amendment questions” raised by the proposed funding to The Sunflower.

The Student Fees Committee recommends funding levels to the student senate. The senate then votes on the proposal, with the ability to change recommended funding for non-fixed-line items. The Sunflower is a fixed-line item on the student fees budget, meaning the senate cannot change the recommended funding level. Ultimately, the budget must be signed by Bardo and then approved as part of the tuition and fees proposal presented to the Kansas Board of Regents in June.

“So what has become crystal clear the last couple of weeks is that annual budgeting cycle that we go through for student fees can’t be used to make long-term decisions about how we give our organizations funding,” Hall said.

Hall said she’s committed to having long-term conversations with The Sunflower, BAJA and Formula Team, and Mikrokosmos about getting “to a place where there isn’t this discrepancy about expectations for fundraising or revenue that get brought up in the student fees process.”

“I hope to never have to see another editor in chief of The Sunflower go through what Chance (Swaim) has had to go through these last couple of times,” Hall said. “It’s hard.”

“But because there are no clear expectations or definitions about the role The Sunflower plays on our campus and how it’s funded long term, it’s going to keep coming up,” Hall said.

The Sunflower is a student group governed by the Publication Board with bylaws approved through the university president. The Sunflower’s mission statement defines The Sunflower’s role on campus as being — both in print and online — “a timely resource of information about the Wichita State University community. It will report on news, issues, activities, academics and athletics, in addition to offering a forum for discussion, reviews and commentary. It will also be an effective learning experience for students, who will have the final authority over what is published.” Its budget is prepared by the fiscal control adviser, from WSU’s financial operations department, in consultation with the editor, ad manager, and faculty adviser.

Each year, The Sunflower receives funding from student fees as a fixed-line item based on a requested amount approved by the Publications Board. Usually, The Sunflower receives the amount it requests under the “Automatic Appropriations” division of the budget, which also includes the Rhatigan Student Center, Educational Opportunity Fund, Student Affairs, Campus Recreation, and Student Government Association.

This year, while all the other “Automatic Appropriations” groups were recommended the funding they requested, within 1.5 percent, the Student Fees Committee recommended cutting The Sunflower’s nearly in half, from $158,000 to $80,000.

Hall said she wants to have conversations with the director of the Elliott School, the Publications Board, and the university administrators about “the long-term viability of The Sunflower.”

Several faculty senators asked questions about the proposed cuts to The Sunflower.

“So, I guess my question is,” said Aleksander Sternfeld Dunn, a professor from the school of music, “how do you have that conversation in good faith if you’re already going to start it off on a foot that suggests this is not really going to be good?”

Hall did not answer the question directly but cited The Sunflower’s reserve account.

“Certainly we’ve heard from lots of alums over the last couple of weeks that are very passionate about The Sunflower, making sure that it stays. So, yeah, I think there might be some other things there that we can think about,” Hall said.

Hall said this is part of a national conversation about funding student newspapers — whether they should receive student fees or be funded solely through advertisements. Sternfeld Dunn said Wichita businesses don’t rely on WSU for business, unlike businesses in college towns like Kansas University and Kansas State University.

“While I understand the national conversation,” Sternfeld Dunn said, “it’s one of those things where I don’t think there’s a one-size-fits-all solution. And so I am concerned that ad revenue is being the thing that’s being looked at as this fund generator, where I don’t think it’s practical with this newspaper. And I think any long-term cuts need to be part of conversation that needs planned out, not just done at the whim.”

Dan Close, a faculty member from the Elliott School of Communication and former editor and faculty adviser for The Sunflower, asked Hall and Hungate if the proposed cut was retaliation for the newspaper’s coverage.

Hungate denied the cuts were retaliation for The Sunflower’s coverage.

“No,” Hungate said. “It was not in retaliation to that, which I have said over and over again. It doesn’t have anything to do with content or coverage. It has everything to do with equitability. Trying to make things in line with other institutions.”

Hall swore it never came up.

“If it was retaliation, they would have been the only ones that got cut. But BAJA and SAE both got cut 50 percent as well. Mikrokosmos got cut completely. So they were looking differently, and I swear that never came up,” Hall said.

BAJA, Formula Team, and Mikrokosmos are all non-fixed-line items. In the second student fees deliberations, those groups were recommended funding at 75 percent of their current funding levels after the committee decided to recommend 75 percent of The Sunflower’s current allocation.