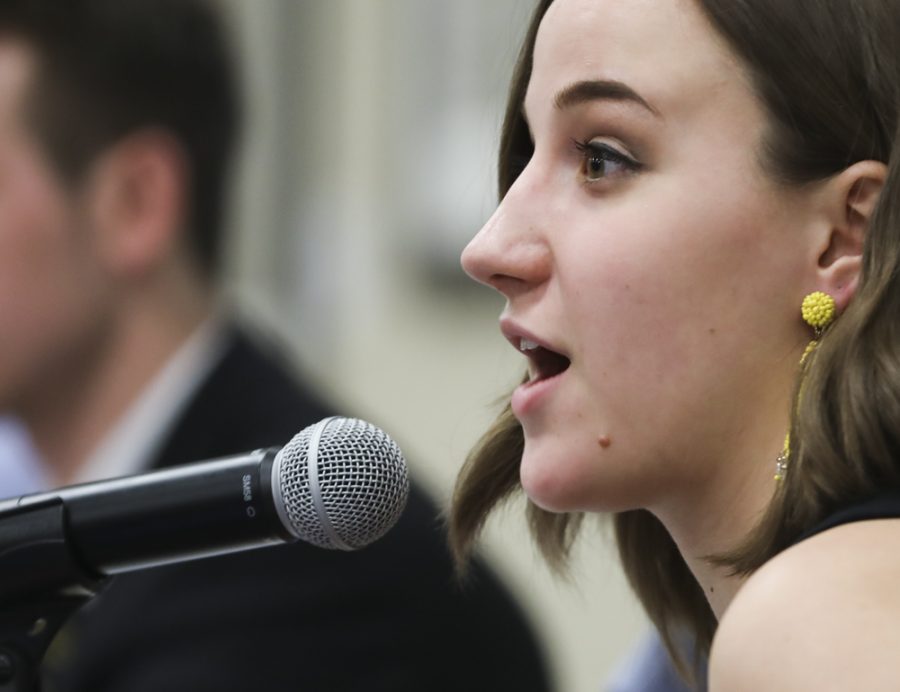 President Paige Hungate answers questions form senators during the SGA meeting where student fees were set to be discussed before being tabled for further discussion.

Faculty Senate passed a resolution urging WSU President John Bardo to restore The Sunflower’s funding after “concerns that the proposed budget cut is intimidation of free student press.” SGA President Paige Hungate, who along with her cabinet voted to slash The Sunflower’s budget, made it clear her stance on cutting the paper was unaffected by the unanimous Faculty Senate vote.

During her weekly report to the student senate, she said she had attended the faculty senate meeting and that the resolution in support of The Sunflower passed.

While addressing Faculty Senate about proposed cuts to The Sunflower’s funding Monday, Hungate said she expects Bardo to sign the budget passed by the student senate, “just because that’s the role that he has to play and SGA represents the students and our vote counts.”

Faculty Senate had just finished passing, unanimously, a resolution calling for Bardo to restore The Sunflower’s funding, which was cut in half during closed-door deliberations last month. The Student Fees Committee’s recommendation to The Sunflower increased by $25,000 after Bardo called for the deliberations to be re-held in public, citing “First Amendment questions” raised by the proposed funding to The Sunflower.

After Bardo called for the deliberations to be re-held in public, Hungate and her cabinet wrote him a letter calling the decision “the pinnacle of cowardice.”

At the fees committee deliberation, Hungate and the members of her cabinet were the only members who voted on the proposed cut to The Sunflower.

The Student Fees Committee recommends funding levels to the student senate. The senate then votes on the proposal, with the ability to change recommended funding for non-fixed-line items. The Sunflower is a fixed-line item on the student fees budget, meaning the senate cannot change the recommended funding level. Ultimately, the budget must be signed by Bardo and then approved as part of the tuition and fees proposal presented to the Kansas Board of Regents in June.